Copyright © German Cancer Research Center (DKFZ), Division of Medical Image Computing (MIC). Please make sure that your usage of this code is in compliance with the code license.

This repository holds the code framework used in the paper Reg R-CNN: Lesion Detection and Grading under Noisy Labels [1]. The framework is a fork of MIC's medicaldetectiontoolkit with added regression capabilities.

As below figure shows, the regression capability allows for the preservation of ordinal relations in the training signal as opposed to a standard categorical classification loss like the cross entropy loss (see publication for details).

Network Reg R-CNN is a version of Mask R-CNN [2] but with a regressor in place of the object-class head (see figure below). In this scenario, the first stage makes foreground (fg) vs background (bg) detections, then the regression head determines the class on an ordinal scale. Consequently, prediction confidence scores are taken from the first stage as opposed to the head in the original Mask R-CNN.

In the configs file of a data set in the framework, you may set attribute self.prediction_tasks = ["task"] to a value "task" from ["class", "regression_bin", "regression"]. "class" produces the same behavior as the original framework, i.e., standard object-detection behavior. "regression" on the other hand, swaps the class head of network Mask R-CNN [2] for a regression head. Consequently, objects are identified as fg/bg and then the class is decided by the regressor. For the sake of comparability, "regression_bin" produces a similar behavior but with a classification head. Both methods should be evaluated with the (implemented) Average Viewpoint Precision instead of only Average Precision.

Below you will found a description of the general framework operations and handling. Basic framework functionality and description are for the most part identical to the original medicaldetectiontoolkit.

This is a comprehensive framework for object detection featuring:

How to cite this code

Please cite the Reg R-CNN publication [1] or the original publication [4] depending on what features you use.

This framework uses two custom mixed C++/CUDA extensions: Non-maximum suppression (NMS) and RoIAlign. Both are adapted from the original pytorch extensions (under torchvision.ops.boxes and ops.roialign). The extensions are automatically compiled from the provided source files under RegRCNN/custom_extensions with above setup.py. However, the extensions need to be compiled specifically for certain GPU architectures. Hence, please ensure that the architectures you need are included in your shell's environment variable TORCH_CUDA_ARCH_LIST before compilation.

Example: You want to use the modules with the new TITAN RTX GPU, which has Compute Capability 7.5 (Turing Architecture), but sometimes you also want to use it with a TITAN Xp (6.1, Pascal). Before installation you need to export TORCH_CUDA_ARCH_LIST="6.1;7.5". A link list of GPU model names to Compute Capability can be found here: https://developer.nvidia.com/cuda-gpus. Note: If you'd like to import the raw extensions (not the wrapper modules), be sure to import torch first.

This framework is meant for you to be able to train models on your own data sets.

In order to include a data set in the framework, create a new folder in RegRCNN/datasets, for instance "example_data". Your data set needs to have a config file in the style of the provided example data sets "lidc" and "toy". It also needs a data loader meeting the same requirements as the provided examples. Likely, you will also need a preprocessing script that transforms your data (once per data set creation, i.e., not a repetitive operation) into a suitable and easily processable format. Important requirements:

Two example data loaders are provided in RegRCNN/datasets. The way I load data is to have a preprocessing script, which after preprocessing saves the data of whatever data type into numpy arrays (this is just run once). During training / testing, the data loader then loads these numpy arrays dynamically. Please note the data input side is meant to be customized by you according to your own needs and the provided data loaders are merely examples: LIDC has a powerful data loader that handles 2D/3D inputs and is optimized for patch-based training and inference. Due to the large data volumes of LIDC, this loader is slow. The provided toy data set, however, is light weight and a good starting point to get familiar with the framework. It is fully creatable from scratch within a few minutes with RegRCNN/datasets/toy/generate_toys.py. 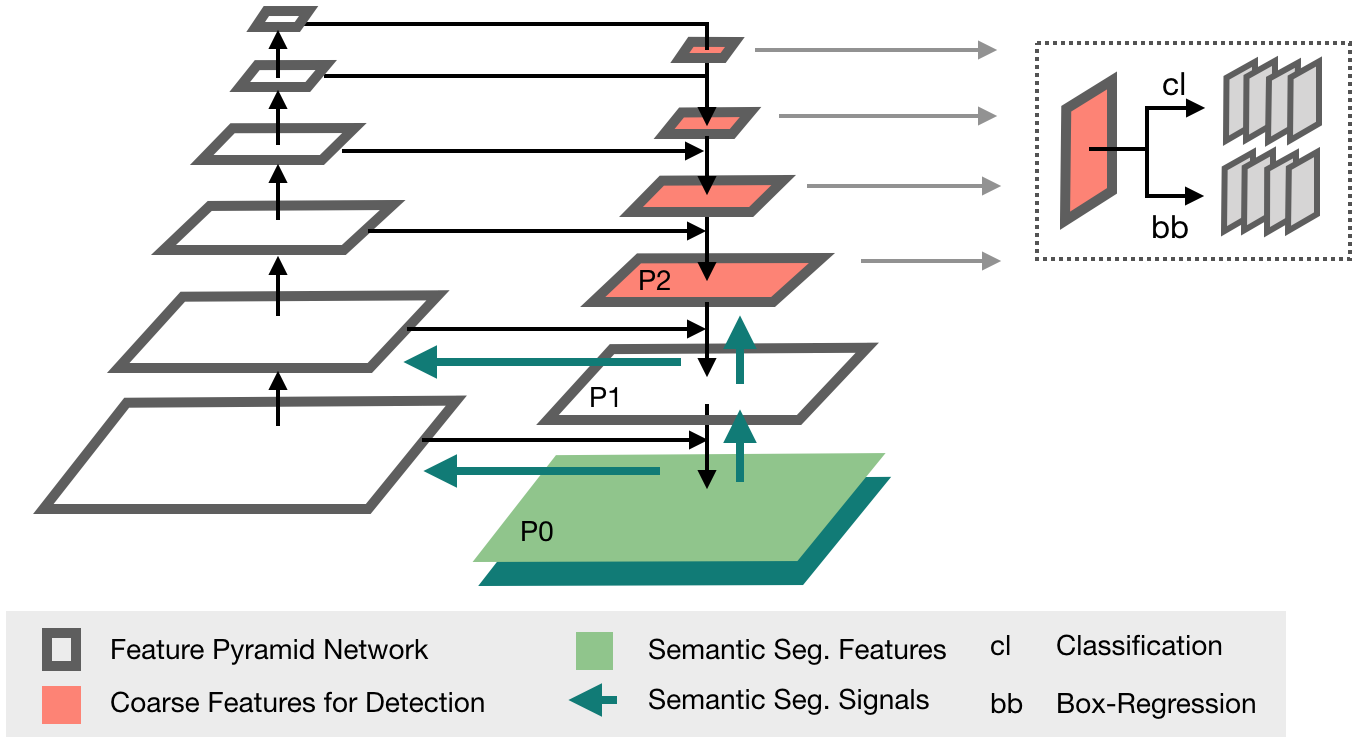 This framework provides an inference module, which automatically handles patching of inputs, and tiling, ensembling, and weighted consolidation of output predictions:

Multiple predictions of the same image (from test time augmentations, tested epochs and overlapping patches), result in a high amount of boxes (or cubes), which need to be consolidated. In semantic segmentation, the final output would typically be obtained by averaging every pixel over all predictions. As described in [4], weighted box clustering (WBC) does this for box predictions: 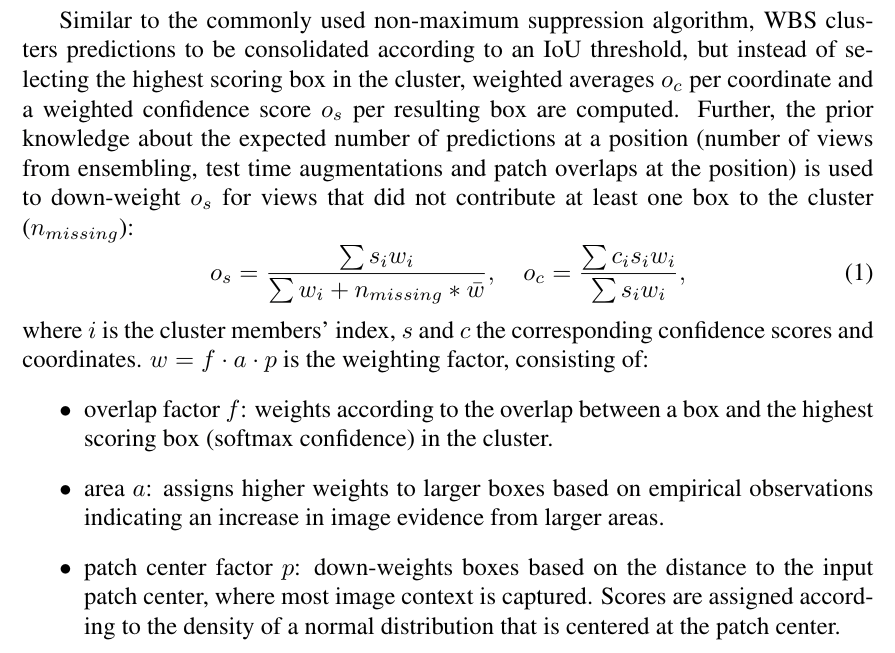 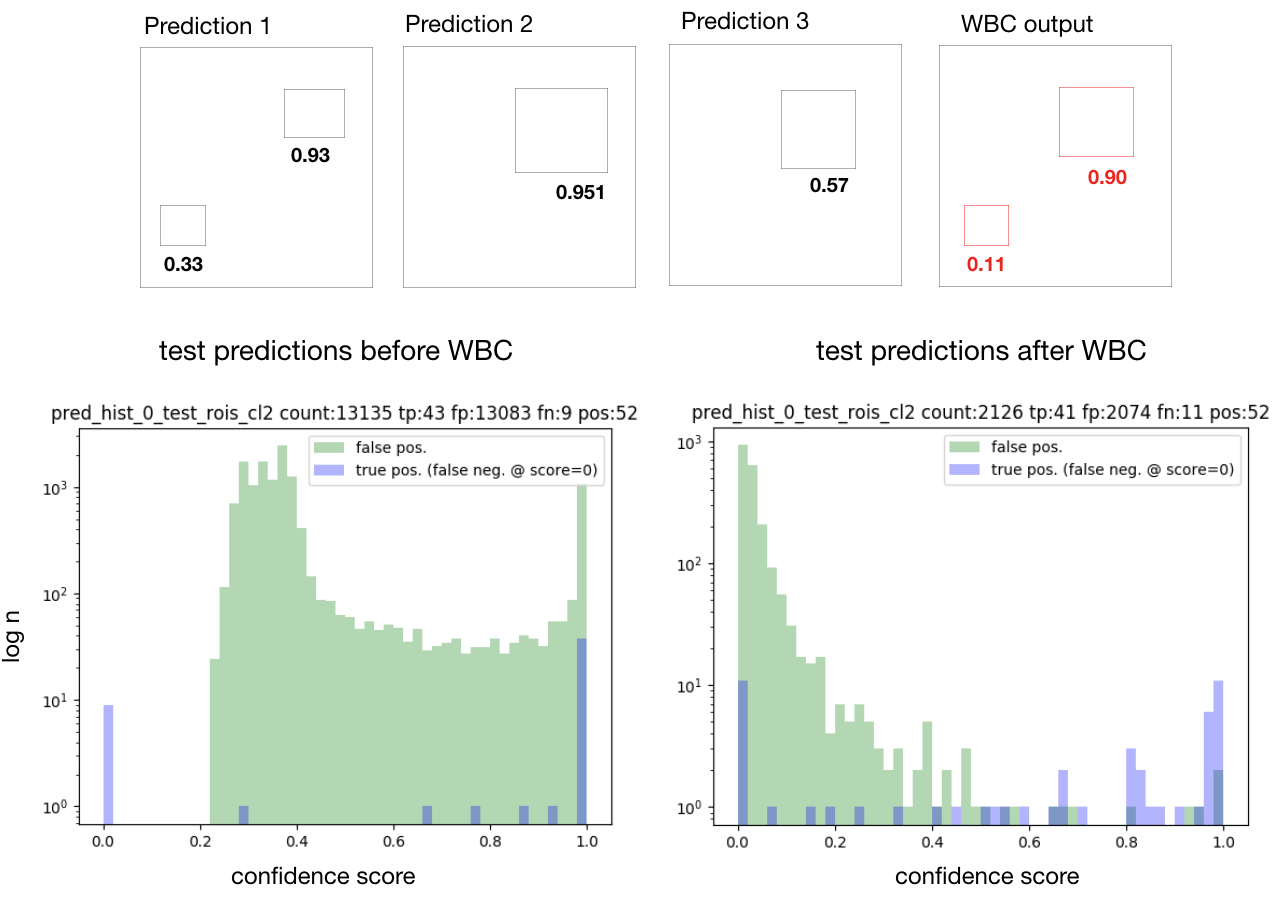 To enable WBC, set self.clustering = "wbc" in your configs file.

Test-time predictions can alternatively be aggregated with standard non-maximum suppression. In your configs file, simply set self.clustering = "nms" instead of "wbc".

As a further alternative you may also choose no test-time aggregation by setting self.clustering = None.

In opposition to the original framework, this fork uses tensorboard for monitoring training and validation progress. Since, for now, the framework cannot easily be updated to pytorch >= 1.x, we need third-party package tensorboardX to use tensorboard with pytorch.

You can set an applicable choice of implemented metrics like "ap" for Average Precision or "auc" for patient-level ROC-AUC in the configs under self.metrics = [...]. Metrics are then evaluated by evaluator.py and recorded in monitor_metrics. logger.metrics2tboard sends monitor_metrics to your tensorboard logfiles at the end of each epoch. You need to separately start a virtual tensorboard server, pass it your experiment directory (or directories, but it crashes if its more than ~5 experiments) and navigate to the server address. (You can also read up on tensoardboard usage in the original documentation).

The data loaders of the provided example data sets employ a custom mechanism with the goal of assembling target-balanced batches or training sequences. I.e., the amount of examples shown per target class should be near balance.

The mechanism creates a sampling-likelihood distribution, as shown below, over all available patients (PIDs). At batch generation, some patients are drawn according to this distribution, others are drawn completely randomly (according to a uniform distribution across all patients). The ratio of uniformly and target-dependently drawn patients is set in your configs file by configs.batch_random_ratio. configs.balance_target determines which targets are considered for the balancing distribution.

The balancing distribution assigns probabilities s.t. expected occurrences of fg and bg RoIs among all classes are as similar as possible. The balance is naturally limited by multiple RoIs occurring in the same patient (e.g, if each patient has 4 RoIs of class 1 and 1 RoI of class 2 the best balancing ratio achievable is still 4:1). See utils/dataloader_utils.BatchGenerator.balance_target_distribution.

Experience has shown, that showing at least one foreground example in each batch is most critical, other properties have less impact.

unittests.py contains some verification and testing procedures, which, however, need you to adjust paths in the TestCase classes before execution. Tests can be used, for instance, to verify if your cross-validation folds have been created correctly, or if separate experiments have the same fold splits.

This framework is published under the APACHE 2.0 License

This repository holds the code framework used in the paper Reg R-CNN: Lesion Detection and Grading under Noisy Labels. It is a fork of MIC-DKFZ/medicaldetectiontoolkit with regression capabilites.