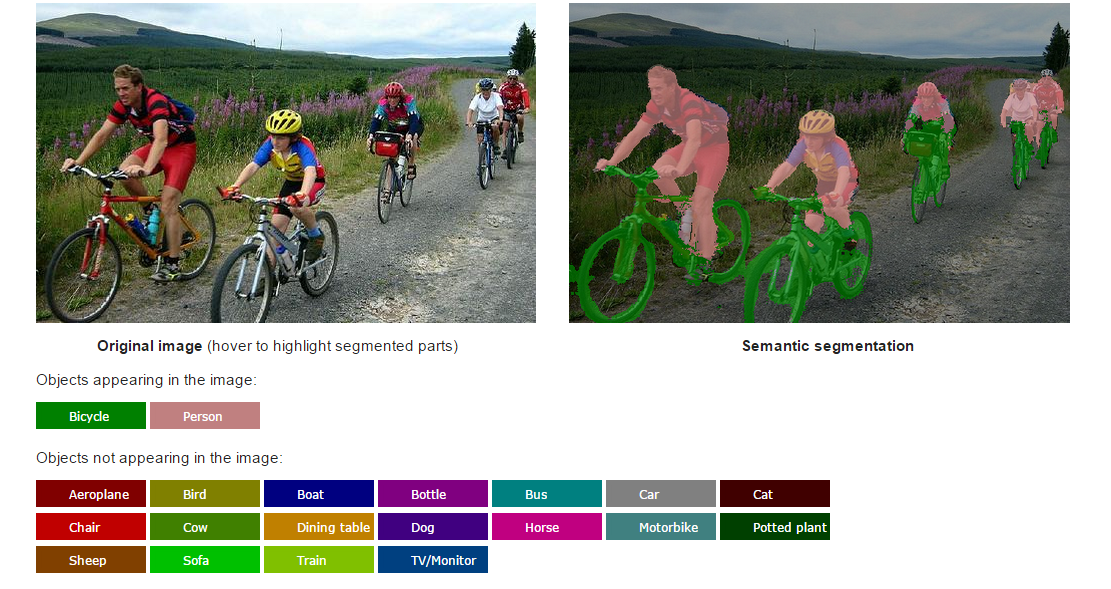 This package contains code for the "CRF-RNN" semantic image segmentation method, published in the ICCV 2015 paper Conditional Random Fields as Recurrent Neural Networks. This paper was initially described in an arXiv tech report. The online demonstration based on this code won the Best Demo Prize at ICCV 2015. Our software is built on top of the Caffe deep learning library. The current version was developed by:

Our work allows computers to recognize objects in images, what is distinctive about our work is that we also recover the 2D outline of objects. Currently we have trained this model to recognize 20 classes. This software allows you to test our algorithm on your own images – have a try and see if you can fool it, if you get some good examples you can send them to us.

Why are we doing this? This work is part of a project to build augmented reality glasses for the partially sighted. Please read about it here: smart-specs.

For demo and more information about CRF-RNN please visit the project website: http://crfasrnn.torr.vision.

If you use this code/model for your research, please cite the following papers:

How to use the CRF-RNN layer

CRF-RNN has been developed as a custom Caffe layer named MultiStageMeanfieldLayer. Usage of this layer in the model definition prototxt file looks the following. Check the matlab-scripts or the python-scripts folder for more detailed examples.

First, clone the project by running:

You need to compile the modified Caffe library in this repository. Instructions for Ubuntu 14.04 are included below. You can also consult the generic Caffe installation guide for further help.

You might need to blacklist some modules so that they do not interfere with the driver installation. You also need to uninstall your default Nvidia Driver first.

When you restart your PC, before logging in, try "Ctrl + Alt + F1" to switch to a text-based login. Try:

Install a BLAS library such as ATLAS, OpenBLAS or MKL. To install BLAS:

If there are no error messages, you can then compile and install the Python and Matlab wrappers: To install the MATLAB wrapper (optional):

To install the Python wrapper (optional):

That's it! Enjoy our software!

MATLAB and Python scripts for running the demo are available in the matlab-scripts and python-scripts directories, respectively. Both of these scripts do the same thing - you can choose either.

Change the directory to python-scripts. First download the model that includes the trained weights. In Linux, this can be done by:

Alternatively, you can also get the model by directly clicking the link in python-scripts/README.md.

To run the demo, execute:

You will get an output.png image.

To use your own images, replace "input.jpg" in the crfasrnn_demo.py file.

Change the directory to matlab-scripts. First download the model that includes the trained weights. In Linux, this can be done by:

Alternatively, you can also get the model by directly clicking the link in matlab-scripts/README.md.

To use your own images, just replace "input.jpg" in the crfrnn_demo.m file.

You can also find a part of our model in MatConvNet.

Explanation about the CRF-RNN layer:

If you would like to try out the CRF-RNN model we trained, you should keep the layer name as it is ("inference1"), so that the code will correctly load the parameters from the caffemodel. Otherwise, it will reinitialize parameters.

You should find out that the end-to-end trained CRF-RNN model does better than the alternatives. If you set the CRF-RNN layer name to "inference2", you should observe lower performance since the parameters for both CNN and CRF are not jointly optimized.

Training CRF-RNN on a new dataset:

If you would like to train CRF-RNN on other datasets, please follow the piecewise training described in our paper. In short, you should first train a strong pixel-wise CNN model. After this, you could plug our CRF-RNN layer into it by adding the MultiStageMeanfieldLayer to the prototxt file. You should then be able to train the CNN and CRF-RNN parts jointly end-to-end.

Notice that the current deploy.prototxt file we have provided is tailored for PASCAL VOC Challenge. This dataset contains 21 class labels including background. You should change the num_output in the corresponding layer if you would like to finetune our model for other datasets. Also, the deconvolution layer in current code does not allow initializing the parameters through prototxt. If you change the num_output there, you should manually re-initialize the parameters in the caffemodel file.

Why predictions are all black?

This error usually occurs when you do not place the spatial.par and bilateral.par files in the script path.

We would like to thank martinkersner and MasazI for providing Python training scripts for CRF-RNN.

Merge with the upstream caffe

It is possible to integrate the CRF-RNN code into upstream Caffe. However, due to the change of the crop layer, the caffemodel we provided might require extra training to provide the same accuracy. mtourne kindly provided a version that merged the code with upstream caffe.

hyenal kindly provided a purely GPU version of CRF-RNN. This would lead to considerably faster training and testing.

CRF-as-RNN as a layer in Lasagne

Let us know if we have missed any other works from third parties.