The Children's Guide to Kubernetes is a simple, gentle answer a father gives his daughter, when she inquisitively asked about Kubernetes. It was written by Matt Butcher on the DEIS blog.

We loved the story and the imagery in it and thought the characters from the Illustrated Guide would make for an interesting demo. The demo has a few services, each of which represent an individual character in the story, as well as some we added. Each service is written in a different language, showing how the Azure Kubernetes Service (AKS) cluster can run anything you can bring it.

Here's a short list of all the things you'll need to do. Don't worry - you'll be up and running in about thirty minutes.

Clone and Open the Code

The Phippy and Friends repository is public. Just clone it to your local machine and open the folder up in Visual Studio Code to get started.

Get your AKS Ingress URL

A few of the services will provide HTML UIs. To enable external access, Ingress needs to be set up on each of these services using the external DNS of the cluster. Don't worry, though, this is easy. You can use VS Code's integrated terminal or the Cloud Shell tools in VS Code to run this az command line call, which will get your AKS cluster's external DNS. 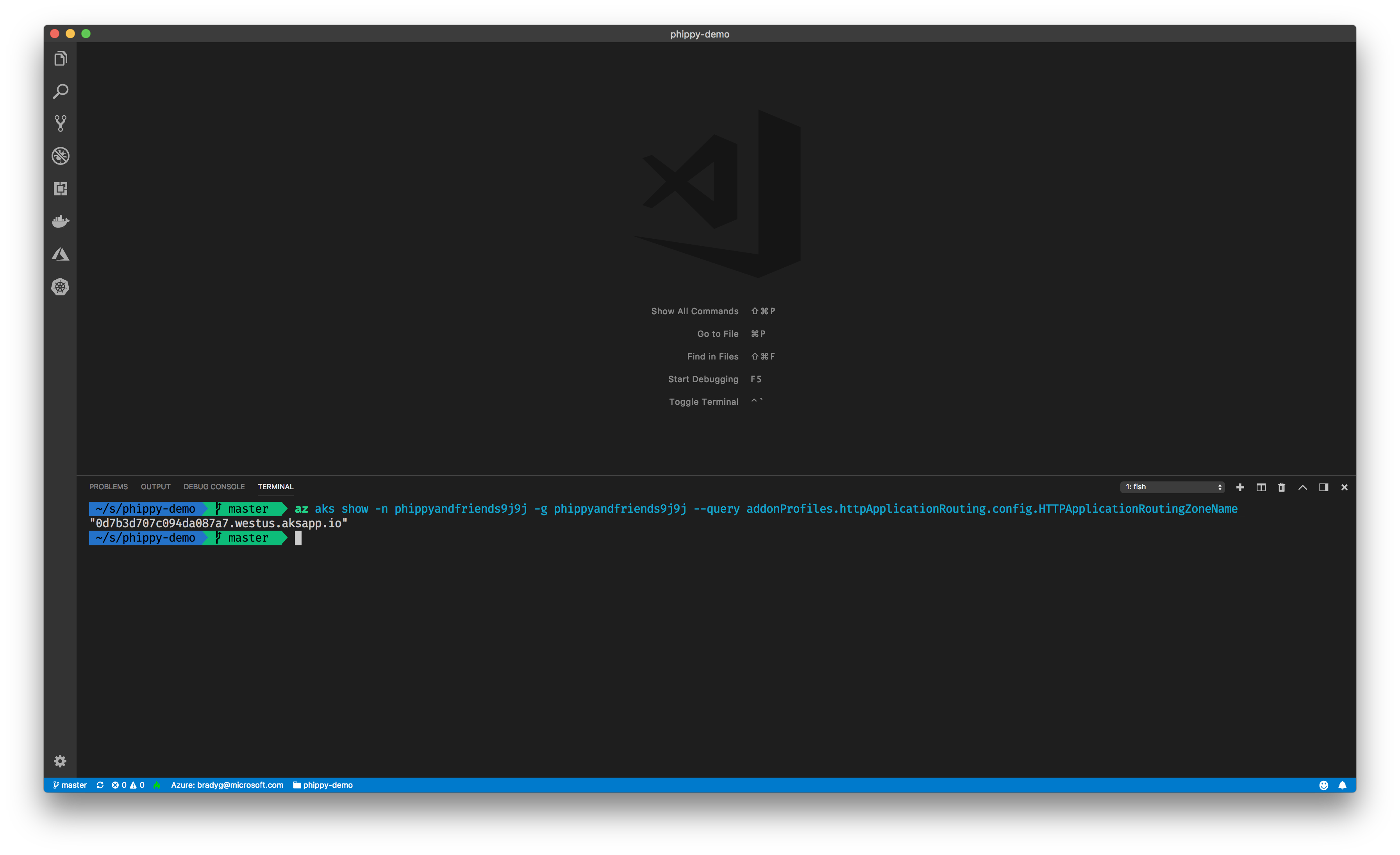 You can also get the DNS from the Azure portal if you prefer. 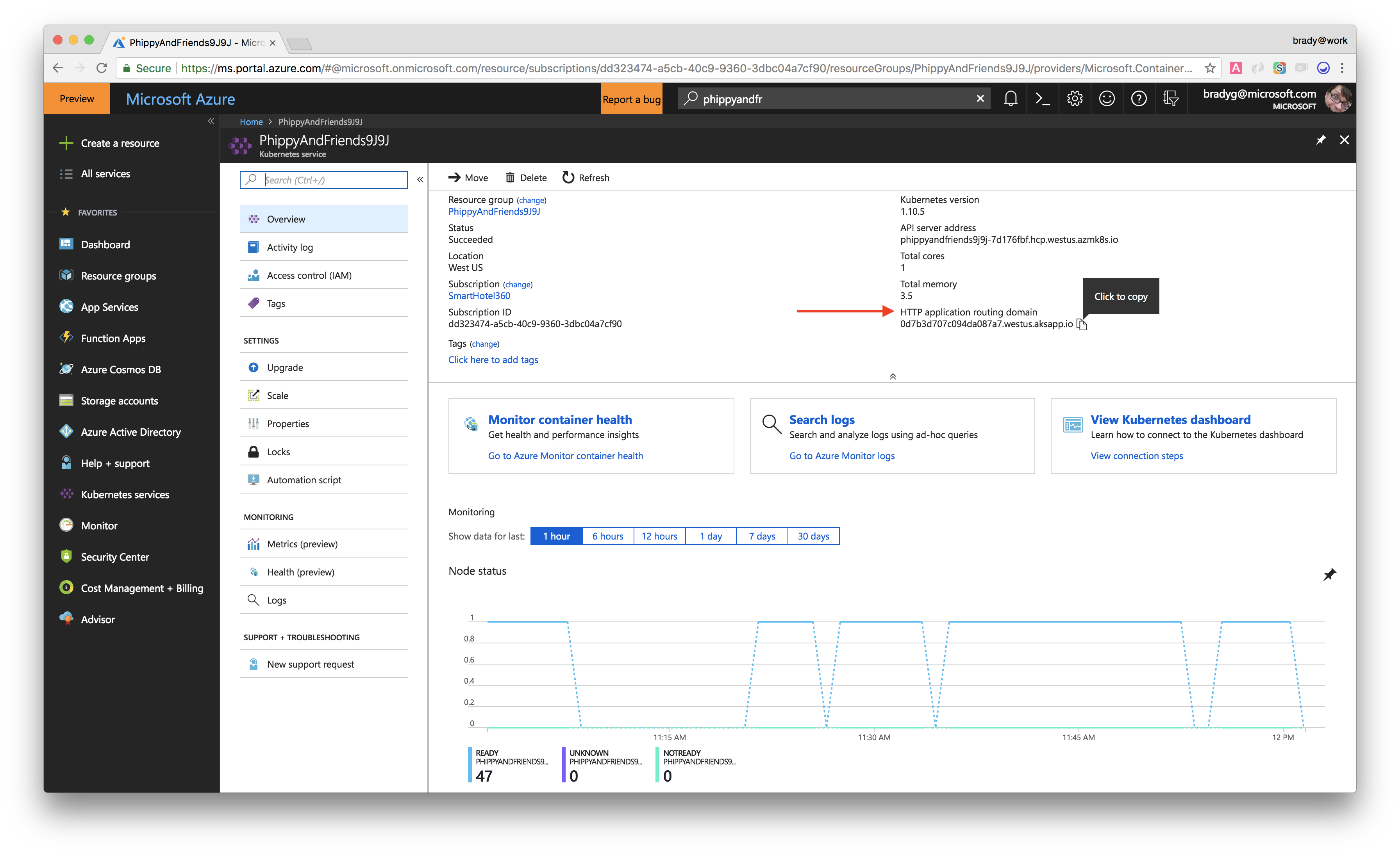 We'll be deploying the parrot service first (more on that in a moment), so let's take a look at the values.yaml file for parrot. The values.yaml file is where you can customize your service, release, deployment, and in our case, ingress settings. Find the basedomain property. 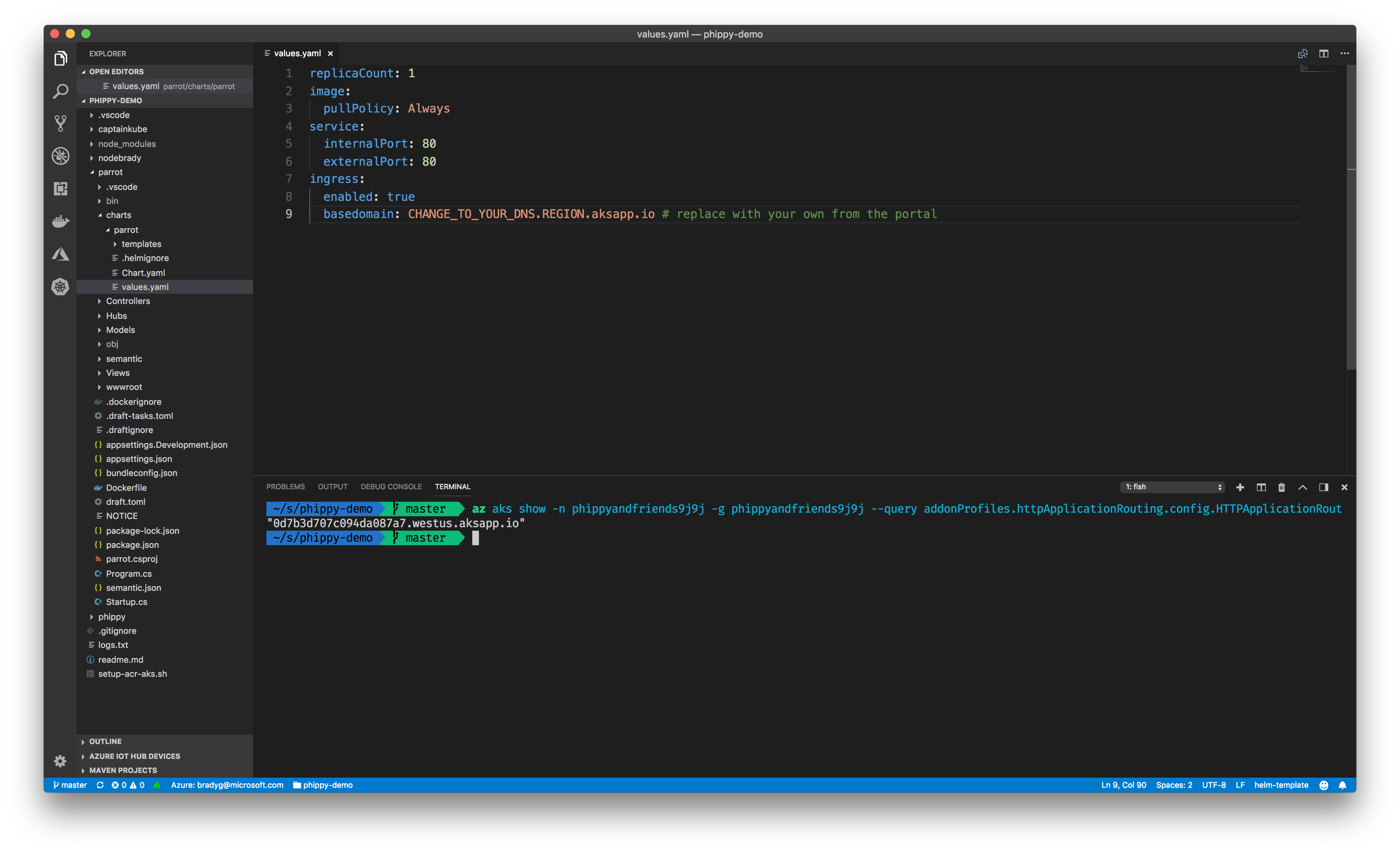 Change the value of the basedomain property to match the DNS for your AKS cluster. 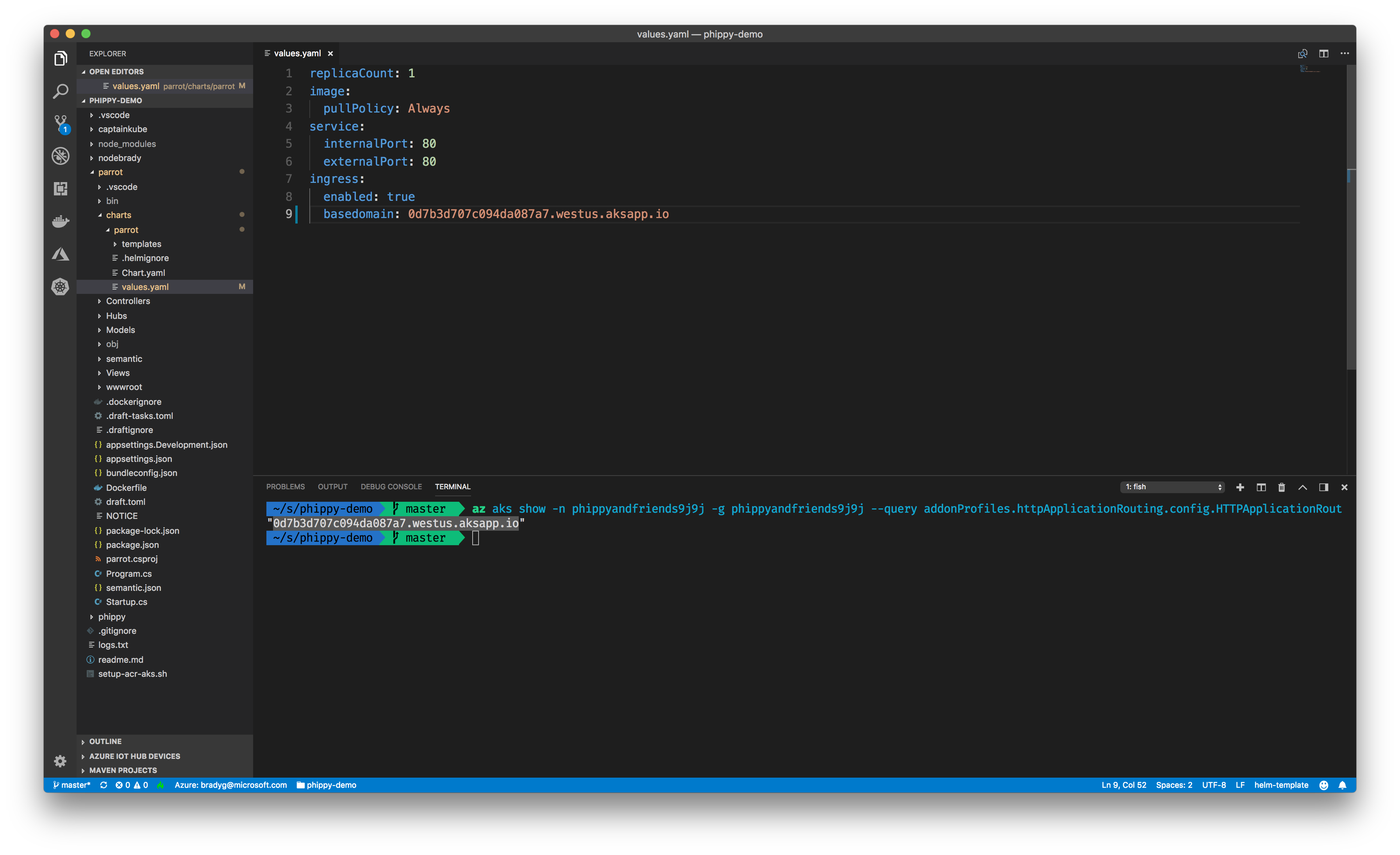 Connect to your Registry

If you want to select which registry to push to, use the command below:

If you're using ACR, you can also log into your registry using the Azure CLI.

Deploy Parrot and Captain Kube with Draft and Helm

These two baseline services need to be running first, so you can Draft them up into the cluster using the commands below.

You'll be provided feedback as the deployment takes place. 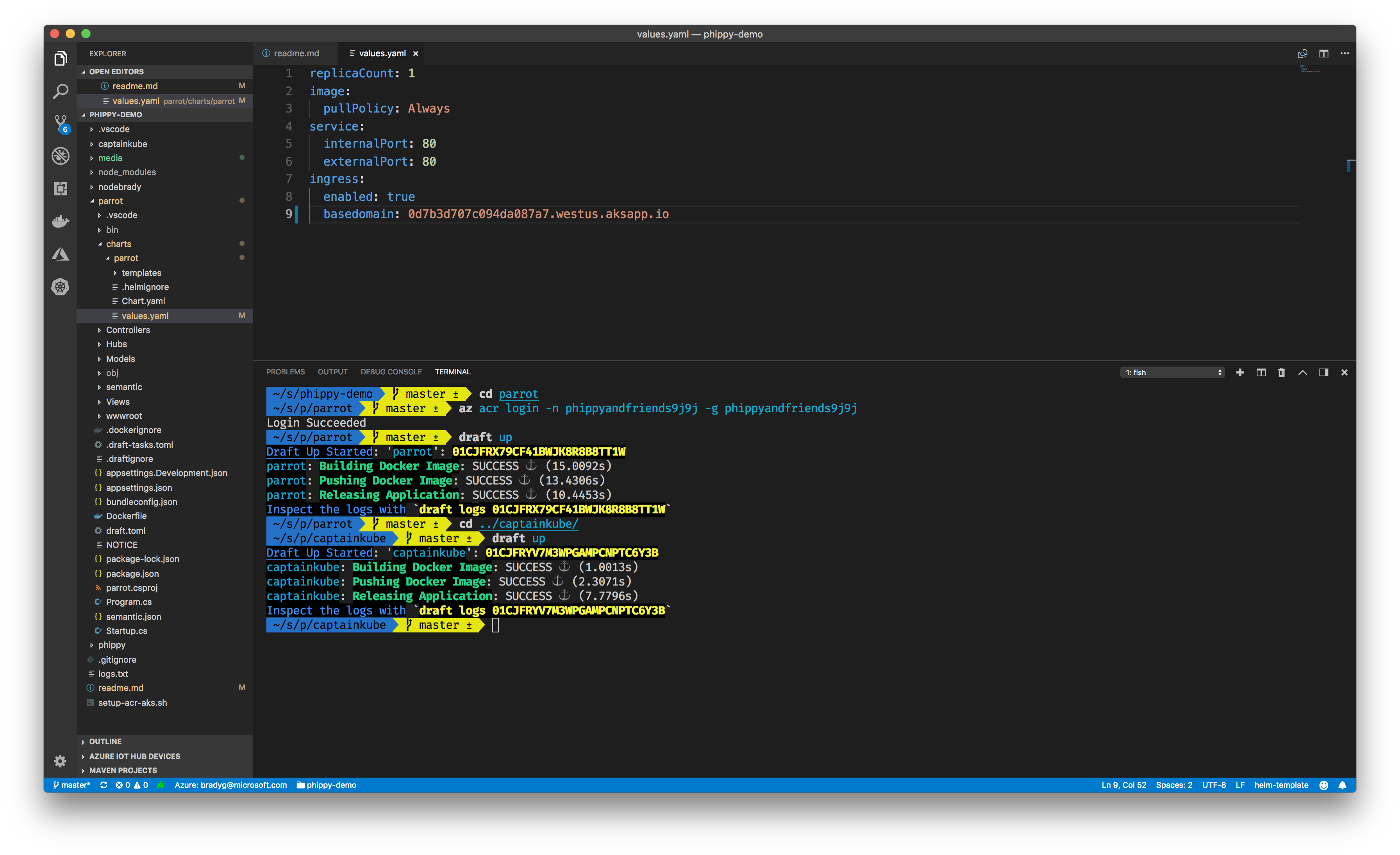 Once the deployment has completed, enter this Kubernetes CLI command to see everything you've deployed into the cluster.

You should see something like this in your terminal window.

Eventually, your ingress will reflect the public IP address, which is your sign that parrot's DNS will work. So copy it from the terminal window.

Drop parrot's ingress URI into a web browser and you'll see the dashboard, which confirms you've got two services - parrot and captainkube - running in your cluster. 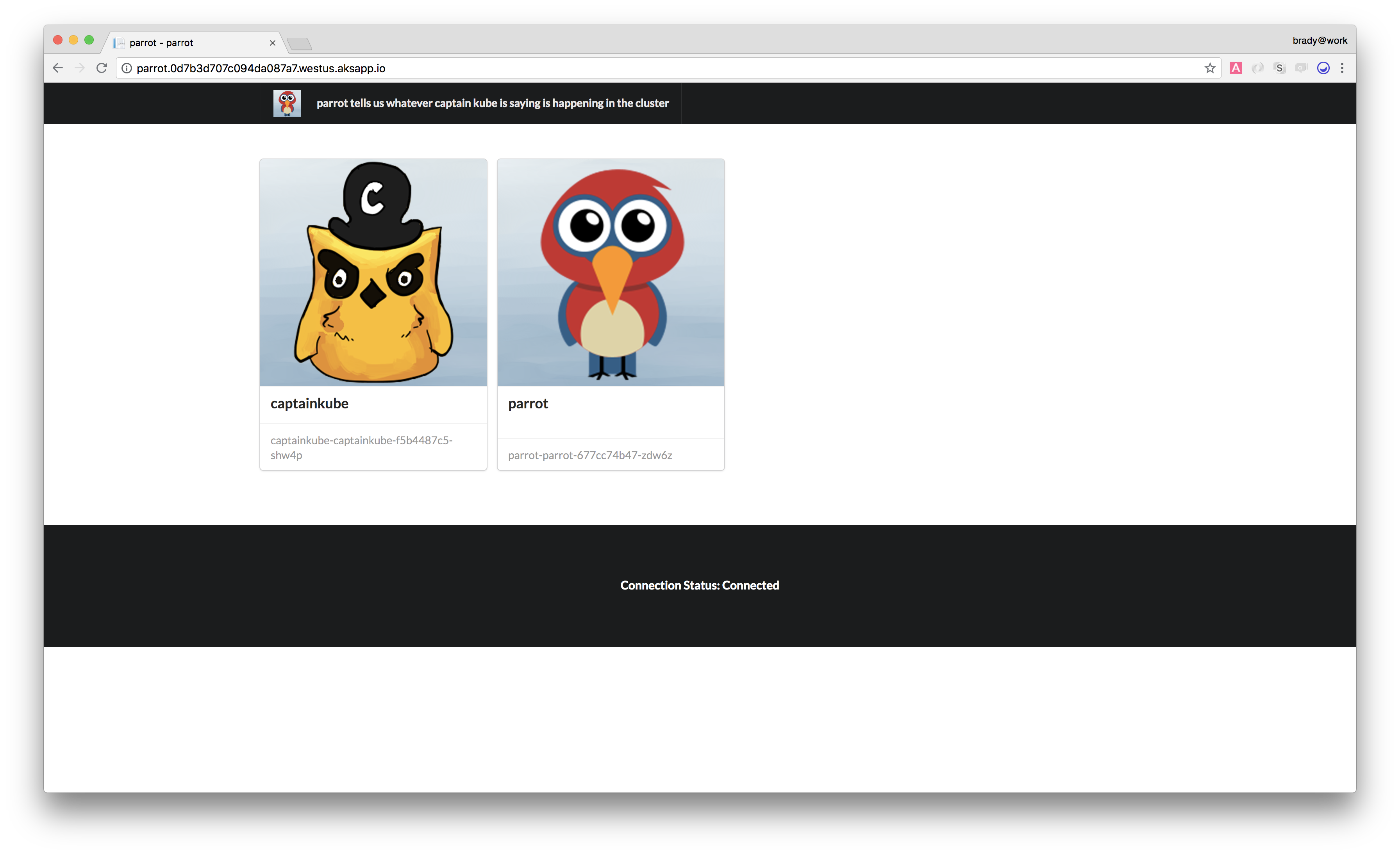 The Phippy service is a super-simple PHP app.

Next, CD into the phippy directory, as we definitely want to make sure we deploy our star of the show, Phippy, into our AKS cluster. Use the same draft up command as you did for parrot and captainkube, and you'll see the phippy service's deployment status as it occurs.

The moment the deployment finishes, the dashboard will light up with Phippy! 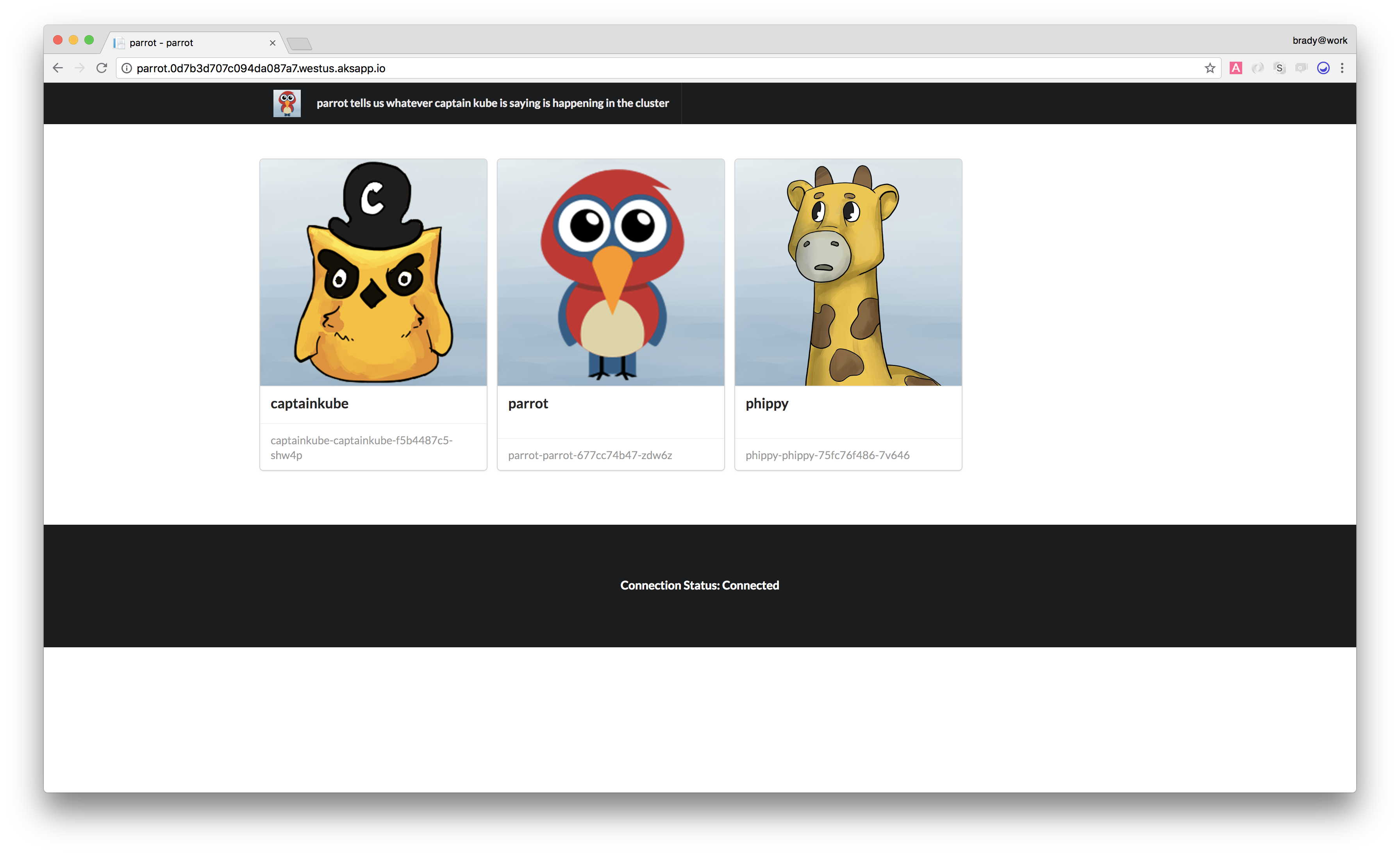 The final service is a basic Node.js application represented by the Node.js-decorated Azure Brady, the Open Cloud Ninja Sloth.

You can cd into this service's folder and deploy it using draft up as you did with the others. But for fun, do this in a window that's side-by-side with the parrot dashboard. This way you can see services appear as you draft up and vanish as you draft delete.

Scale your nodebrady by running this:

You could also leverage Azure DevOps to implement a CI/CD pipeline for each app. For that you could create Azure build pipelines per app for both Build/CI and Release/CD by using the associated YAML definitions: 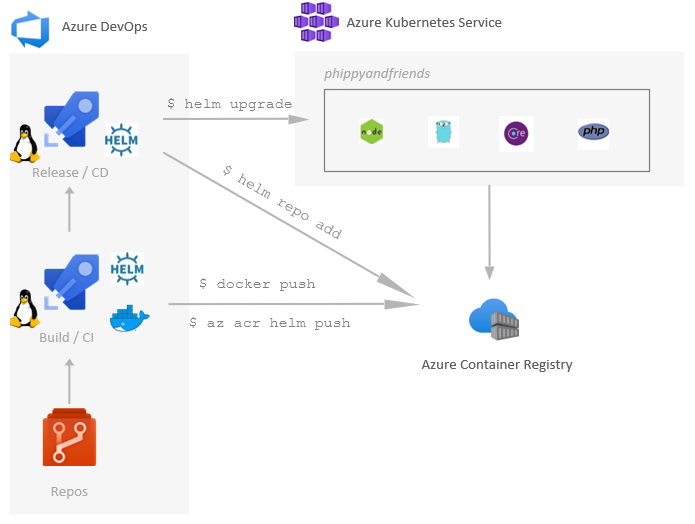 For more information, you could follow this tutorial: Using Azure DevOps to setup a CI/CD pipeline and deploy to Kubernetes.

Phippy and Friends is open-source, and we'd love your contributions. Submit issues, then work those issues and send us a pull request. Customize the parrot dashboard with a theme, put the characters on a boat, launch them into space. We'd love to see what other characters you'll add to the dashboard!

Sometimes a previous deployment would fail and you would receive a message like so:

Some awesome people worked on the Phippy and Friends demo. Stella Lin brought the idea to Brady Gaster, who then got a ton of help from Ralph Squillace and Ahmed Sabbour to bring it to life and Mathieu Benoit for his Azure DevOps pipelines. As mentioned earlier, Phippy and Friends was originally inspired by a blog post written by Matt Butcher. Phippy and friends were conceived by Matt Butcher, Karen Chu, and Bailey Beougher and are licensed by the CNCF under the CC-BY license. More info at phippy.io. Goldie the Gopher is based on the Go Gopher by Renee French.

You can help too, by submitting a pull request and adding your own contributions. When you do, make sure to add your contributions' summary to this section, too!

Simple demonstration, inspired by the Children's Illustrated Guide to Kubernetes, of AKS.