Ignite is fast and secure because of Firecracker. This is an open source KVM implementation from AWS that is optimised for high security, isolation, speed and low resource consumption. AWS uses it as the foundation for their serverless offerings (AWS Lambda and Fargate) that need to load nearly instantly while also keeping users isolated (multitenancy). Firecracker has proven to be able to run 4000 micro-VMs on the same host!

Ignite makes Firecracker easy to use by adopting its developer experience from containers. With Ignite, you pick an OCI-compliant image (Docker image) that you want to run as a VM, and then just execute ignite run instead of docker run. There’s no need to use VM-specific tools to build .vdi, .vmdk, or .qcow2 images, just do a docker build from any base image you want (e.g. ubuntu:18.04 from Docker Hub), and add your preferred contents.

When you run your OCI image using ignite run, Firecracker will boot a new VM in c.125 milliseconds (!) for you, using a default 4.19 linux kernel. If you want to use some other kernel, just specify the --kernel flag, pointing to another OCI image containing a kernel at /boot/vmlinux, and optionally your preferred modules. Next, the kernel executes /sbin/init in the VM, and it all starts up. After this, Ignite connects the VMs to any CNI network, integrating with e.g. Weave Net.

The idea is that Ignite makes Firecracker VMs look like Docker containers. Now we can deploy and manage full-blown VM systems just like e.g. Kubernetes workloads. The images used are OCI/Docker images, but instead of running them as containers, it executes as a real VM with a dedicated kernel and /sbin/init as PID 1.

Networking is set up automatically, the VM gets the same IP as any docker container on the host would.

And Firecracker is fast! Building and starting VMs takes just some fraction of a second, or at most some seconds. With Ignite you can get started with Firecracker in no time!

With Ignite, Firecracker is now much more accessible for end users, which means the ecosystem can achieve the next level of momentum due to the easy onboarding path thanks to a docker-like UX.

Although Firecracker was designed with serverless workloads in mind, it can equally well boot a normal Linux OS, like Ubuntu, Debian or CentOS, running an init system like systemd.

Having a super-fast way of spinning up a new VM, with a kernel of choice, running an init system like systemd allows to run system-level applications like the kubelet, which needs to “own” the full system.

And - potentially - we can run a cloud of VMs ‘anywhere’ using Kubernetes for orchestration, Ignite for virtualization, GitOps for management, and supporting cloud native tools and APIs.

Ignite is different from Kata Containers or gVisor. They don’t let you run real VMs, but only wrap a container in new layer providing some kind of security boundary (or sandbox).

Ignite on the other hand lets you run a full-blown VM, easily and super-fast, but with the familiar container UX. This means you can “go a layer down” and start managing your fleet of VMs powering e.g. a Kubernetes cluster, but still package your VMs like containers.

Please check out the Releases Page.

How to install Ignite is covered in docs/installation.md.

WARNING: In it's v0.X series, Ignite is in alpha, which means that it might change in backwards-incompatible ways.

Note: At the moment ignite needs root privileges on the host to operate, for certain specific operations (e.g. mount). This will change in the future.

Getting Started the GitOps way

In Git you declaratively store the desired state of a set of VMs you want to manage. ignite gitops reconciles the state from Git, and applies the desired changes as state is updated in the repo.

This can then be automated, tracked for correctness, and managed at scale - just some of the benefits of GitOps.

The workflow is simply this:

See it in action!

Please refer to the following documents: 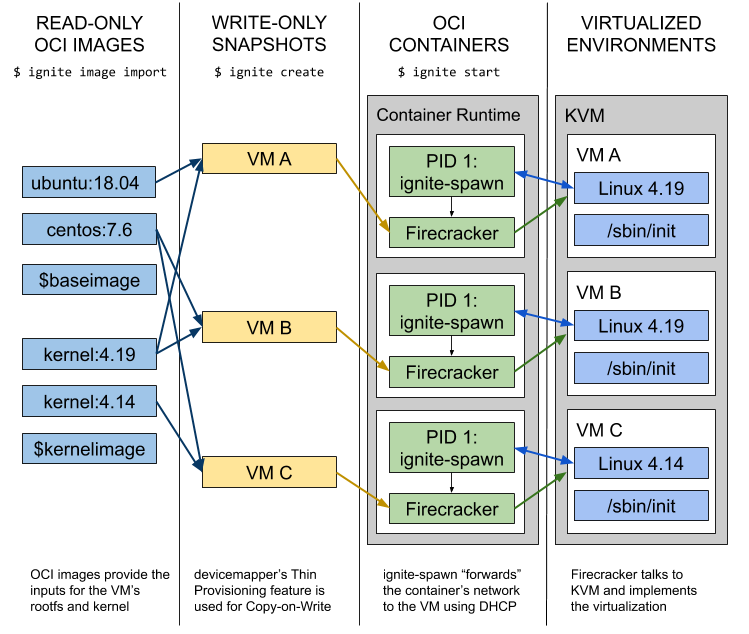 Base images and kernels

A base image is an OCI-compliant image containing some operating system (e.g. Ubuntu). You can follow normal docker build patterns for customizing your VM's rootfs.

A kernel image is an OCI-compliant image containing a /boot/vmlinux (an uncompressed kernel) executable (can be a symlink). You can also put supporting kernel modules in /lib/modules if needed. You can match and mix any kernel and any base image.

As the upstream centos:7 and ubuntu:18.04 images from Docker Hub doesn't have all the utilities and packages you'd expect in a VM (e.g. an init system), we have packaged some reference base images and a sample kernel image to get started quickly.

You can use the following pre-built images with Ignite. They are built on the normal Docker Hub images, but add systemd, openssh, and similar utilities.

These prebuilt images can be given to ignite run directly.

Please see CONTRIBUTING.md and our Code Of Conduct.

Other interesting resources include:

If you have any questions about, feedback for or problems with ignite:

Your feedback is always welcome!