JSON is everywhere on the Internet. Servers spend a *lot* of time parsing it. We need a fresh approach. The simdjson library uses commonly available SIMD instructions and microparallel algorithms to parse JSON 4x faster than RapidJSON and 25x faster than JSON for Modern C++.

This library is part of the Awesome Modern C++ list.

The simdjson library is easily consumable with a single .h and .cpp file.

The simdjson library uses three-quarters less instructions than state-of-the-art parser RapidJSON. To our knowledge, simdjson is the first fully-validating JSON parser to run at gigabytes per second (GB/s) on commodity processors. It can parse millions of JSON documents per second on a single core.

The following figure represents parsing speed in GB/s for parsing various files on an Intel Skylake processor (3.4 GHz) using the GNU GCC 10 compiler (with the -O3 flag). We compare against the best and fastest C++ libraries on benchmarks that load and process the data. The simdjson library offers full unicode (UTF-8) validation and exact number parsing. 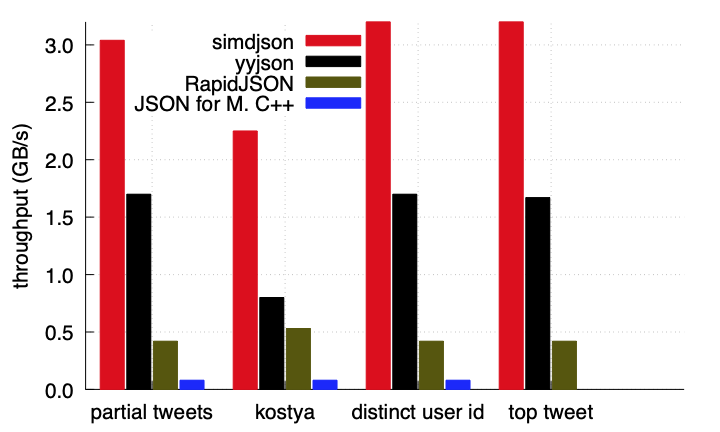 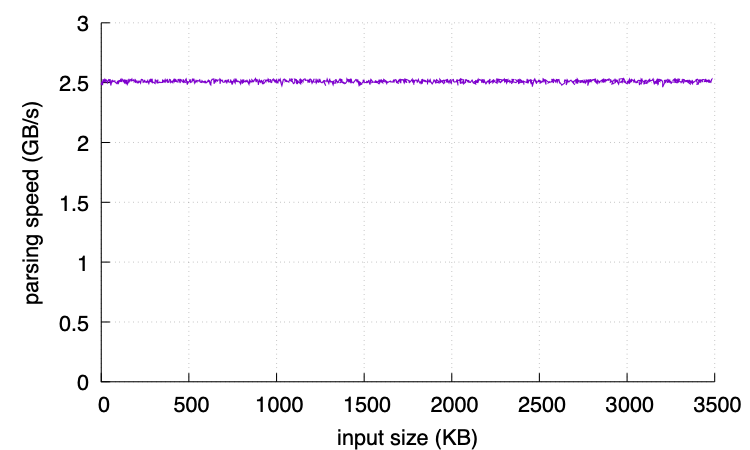 All our experiments are reproducible.

For NDJSON files, we can exceed 3 GB/s with our multithreaded parsing functions.

If you are planning to use simdjson in a product, please work from one of our releases.

Bindings and Ports of simdjson

We distinguish between "bindings" (which just wrap the C++ code) and a port to another programming language (which reimplements everything).

Some people enjoy reading our paper: A description of the design and implementation of simdjson is in our research article:

We have an in-depth paper focused on the UTF-8 validation:

We also have an informal blog post providing some background and context.

For the video inclined, 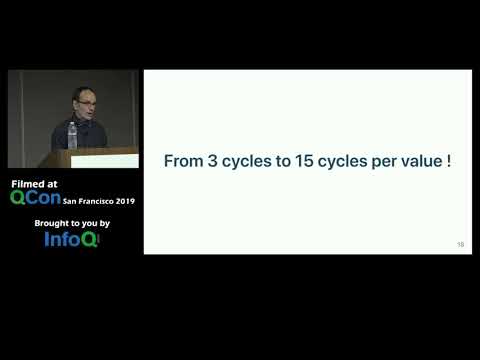 (It was the best voted talk, we're kinda proud of it.)

The work is supported by the Natural Sciences and Engineering Research Council of Canada under grant number RGPIN-2017-03910.

This code is made available under the Apache License 2.0.

Under Windows, we build some tools using the windows/dirent_portable.h file (which is outside our library code): it under the liberal (business-friendly) MIT license.

For compilers that do not support C++17, we bundle the string-view library which is published under the Boost license. Like the Apache license, the Boost license is a permissive license allowing commercial redistribution.

For runtime dispatching, we use some code from the PyTorch project licensed under 3-clause BSD.

Parsing gigabytes of JSON per second