NOTE: Do not clone this repo to your workspace. Fork it first, then clone your fork.

In a previous assignment you created a simple Web app that plays the WordGuesser game.

In this assignment, you'll reuse the same game code but "wrap" it in a simple Rails app instead of Sinatra.

Understand the differences between how Rails and Sinatra handle various aspects of constructing SaaS, including:

NOTE: You may find these Rails guides and the Rails reference documentation helpful to have on hand.

Like substantially all Rails apps, you can get this one running by doing these steps:

Q1.1. What is the goal of running bundle install?

Q1.2. Why is it good practice to specify --without production when running it on your development computer?

Q1.3. (For most Rails apps you'd also have to create and seed the development database, but like the Sinatra app, this app doesn't use a database at all.)

Play around with the game to convince yourself it works the same as the Sinatra version.

To view the game in Codio, use the Preview button that says "Project Index" in the top tool bar. Click the drop down and select "Box URL" 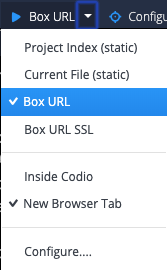 For subsequent previews, you will not need to press the drop down -- your button should now read "Box URL".

Both apps have similar structure: the user triggers an action on a game via an HTTP request; a particular chunk of code is called to "handle" the request as appropriate; the WordGuesserGame class logic is called to handle the action; and usually, a view is rendered to show the result. But the locations of the code corresponding to each of these tasks is slightly different between Sinatra and Rails.

Q2.1. Where in the Rails app directory structure is the code corresponding to the WordGuesserGame model?

Q2.2. In what file is the code that most closely corresponds to the logic in the Sinatra apps' app.rb file that handles incoming user actions?

Q2.3. What class contains that code?

Q2.4. From what other class (which is part of the Rails framework) does that class inherit?

Q2.5. In what directory is the code corresponding to the Sinatra app's views (new.erb, show.erb, etc.)?

Q2.6. The filename suffixes for these views are different in Rails than they were in the Sinatra app. What information does the rightmost suffix of the filename (e.g.: in foobar.abc.xyz, the suffix .xyz) tell you about the file contents?

Q2.7. What information does the other suffix tell you about what Rails is being asked to do with the file?

Q2.8. In what file is the information in the Rails app that maps routes (e.g. GET /new) to controller actions?

Q2.9. What is the role of the :as => 'name' option in the route declarations of config/routes.rb? (Hint: look at the views.)

Q3.1. In the Sinatra version, before do...end and after do...end blocks are used for session management. What is the closest equivalent in this Rails app, and in what file do we find the code that does it?

Q3.2. A popular serialization format for exchanging data between Web apps is JSON. Why wouldn't it work to use JSON instead of YAML? (Hint: try replacing YAML.load() with JSON.parse() and .to_yaml with .to_json to do this test. You will have to clear out your cookies associated with localhost:3000, or restart your browser with a new Incognito/Private Browsing window, in order to clear out the session[]. Based on the error messages you get when trying to use JSON serialization, you should be able to explain why YAML serialization works in this case but JSON doesn't.)

Q4.1. In the Sinatra version, each controller action ends with either redirect (which as you can see becomes redirect_to in Rails) to redirect the player to another action, or erb to render a view. Why are there no explicit calls corresponding to erb in the Rails version? (Hint: Based on the code in the app, can you discern the Convention-over-Configuration rule that is at work here?)

Q4.2. In the Sinatra version, we directly coded an HTML form using the <form> tag, whereas in the Rails version we are using a Rails method form_tag, even though it would be perfectly legal to use raw HTML <form> tags in Rails. Can you think of a reason Rails might introduce this "level of indirection"?

Q4.3. How are form elements such as text fields and buttons handled in Rails? (Again, raw HTML would be legal, but what's the motivation behind the way Rails does it?)

Q4.4. In the Sinatra version, the show, win and lose views re-use the code in the new view that offers a button for starting a new game. What Rails mechanism allows those views to be re-used in the Rails version?

The Cucumber scenarios and step definitions (everything under features/, including the support for Webmock in webmock.rb) was copied verbatim from the Sinatra version, with one exception: the features/support/env.rb file is simpler because the cucumber-rails gem automatically does some of the things we had to do explicitly in that file for the Sinatra version.

Q5.1. What is a qualitative explanation for why the Cucumber scenarios and step definitions didn't need to be modified at all to work equally well with the Sinatra or Rails versions of the app?

4.6 Rails version of hw-sinatra-saas-hangperson, to show differences between Sinatra and Rails