I decided one day to make a clock using old-school 2.3" LED 7-segment displays. Which I happen to have a lot of. After hacking on it for a few weekends, it ended up being this:

The code for this clock has been a journey. There are a lot of things going on at the same time, animations at different speeds, and periodic changes. At first, I was hacking this counting interations and tweaking, but it soon became clear this was causing problems. This led to some frustrated rewrites and a lot of learning.

I decided to give NeoPixelBus a try, which I had been using for basic things, and discovered the NeoPixelAnimator object. Unline other periodic timer libraries, NeoPixelAnimator can manage multiple repeating animation cycles, and uses call backs with progress indication. It also has built-in easing functions, which helps make things feel more organic.

This repository contains the firmware for the clock as well as various pictures, drawings and schematics, in case you want to make something similar.

Both PCB Projects and designs used are available here:

The dual-rail power board with level shifting

A 2.3mm barrel jack power connector feeds 9-12v into an adjustable buck converter, which produces ~7v DC line for the 7-segment modules. A second buck converter turns that into 5v, which feeds the microcontroller, WS2812 LEDs, and the 5v line going to the modules for the driver ICs. The regulator on the ESP32 produces 3.3v which is also available on-board for the display and sensors. The board has a couple of DIP switches in case you ever need to disable one of the two power rails for troubleshooting. 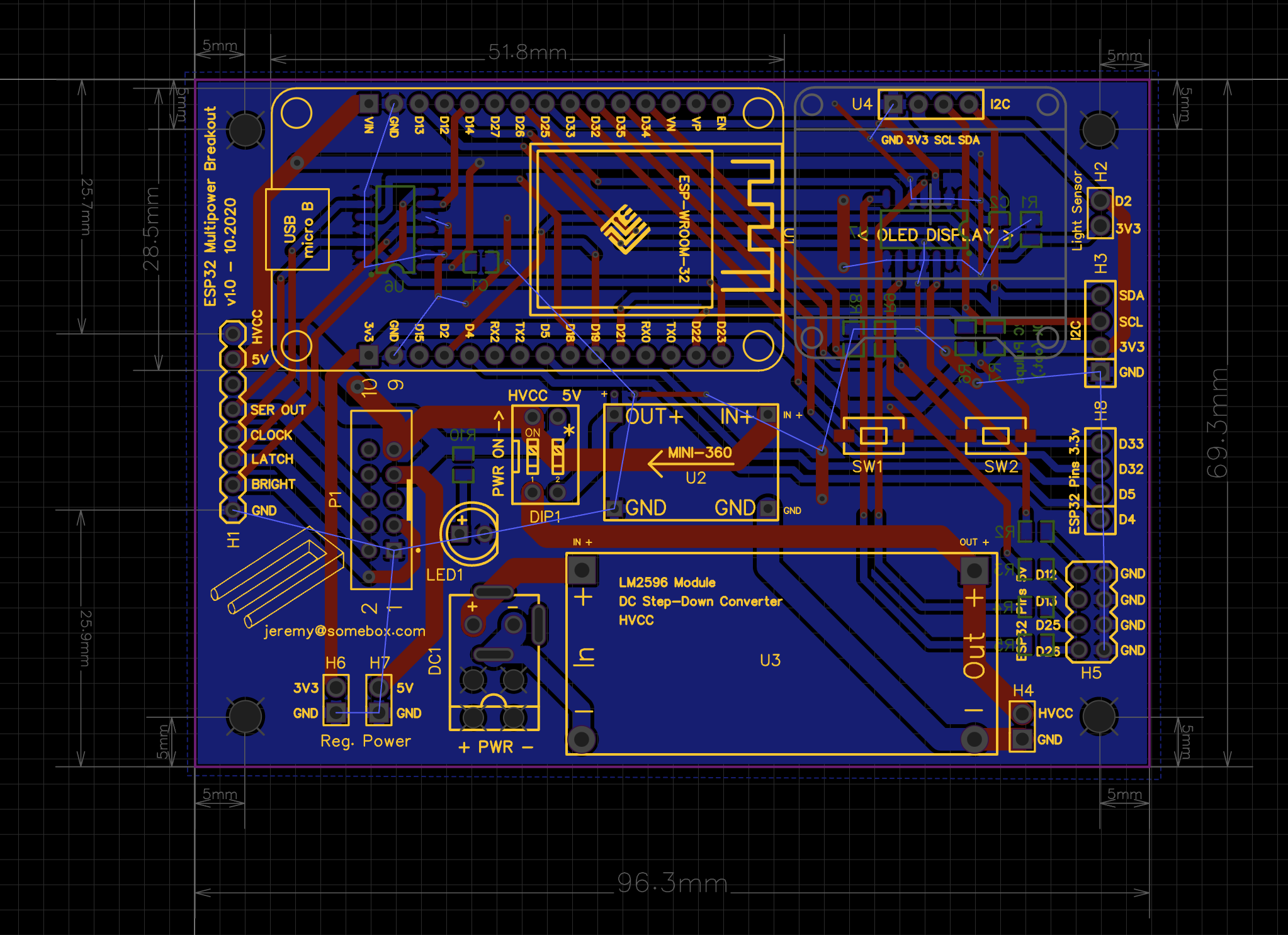 Each board sports a TPIC6C596 driver IC (similar to standard "595" chips, but with much higher current handling) and current-limiting resistors for each LED in the digit. In this configuration, HVCC DC power at ~7v and 5v are both supplied to the digit modules. Note that red and green modules have different power requirements, so the resistors on the boards are tweaked accordingly. 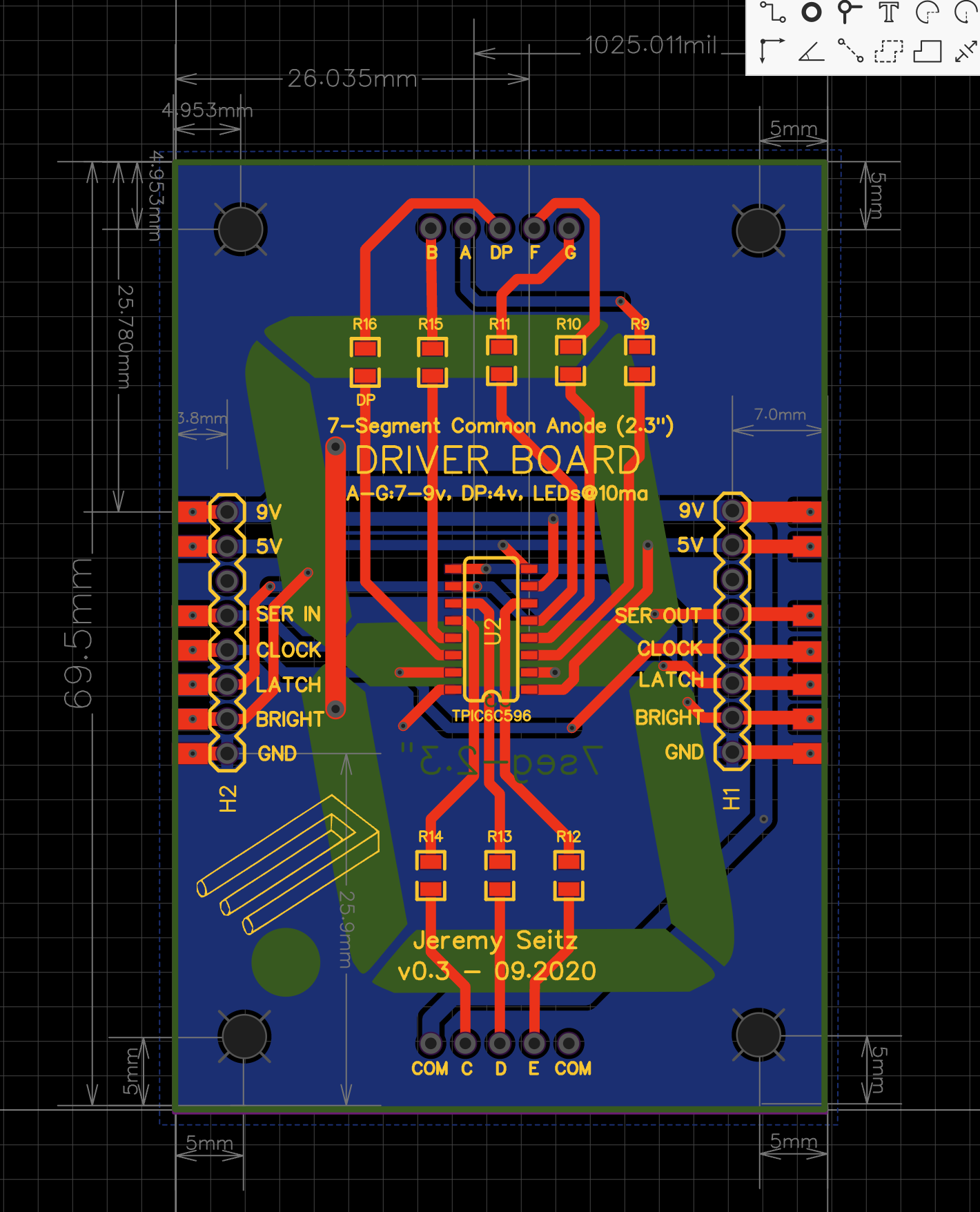 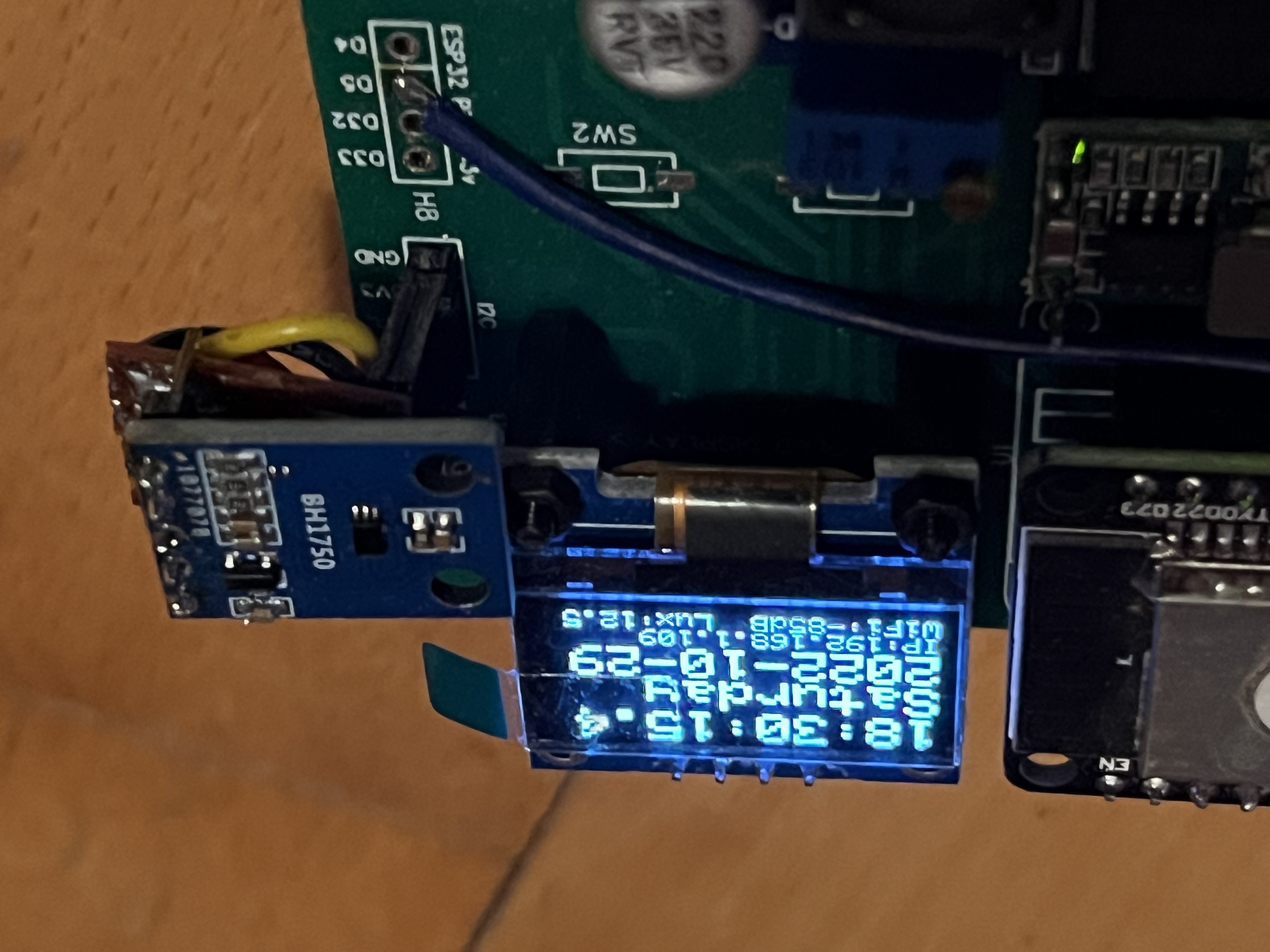 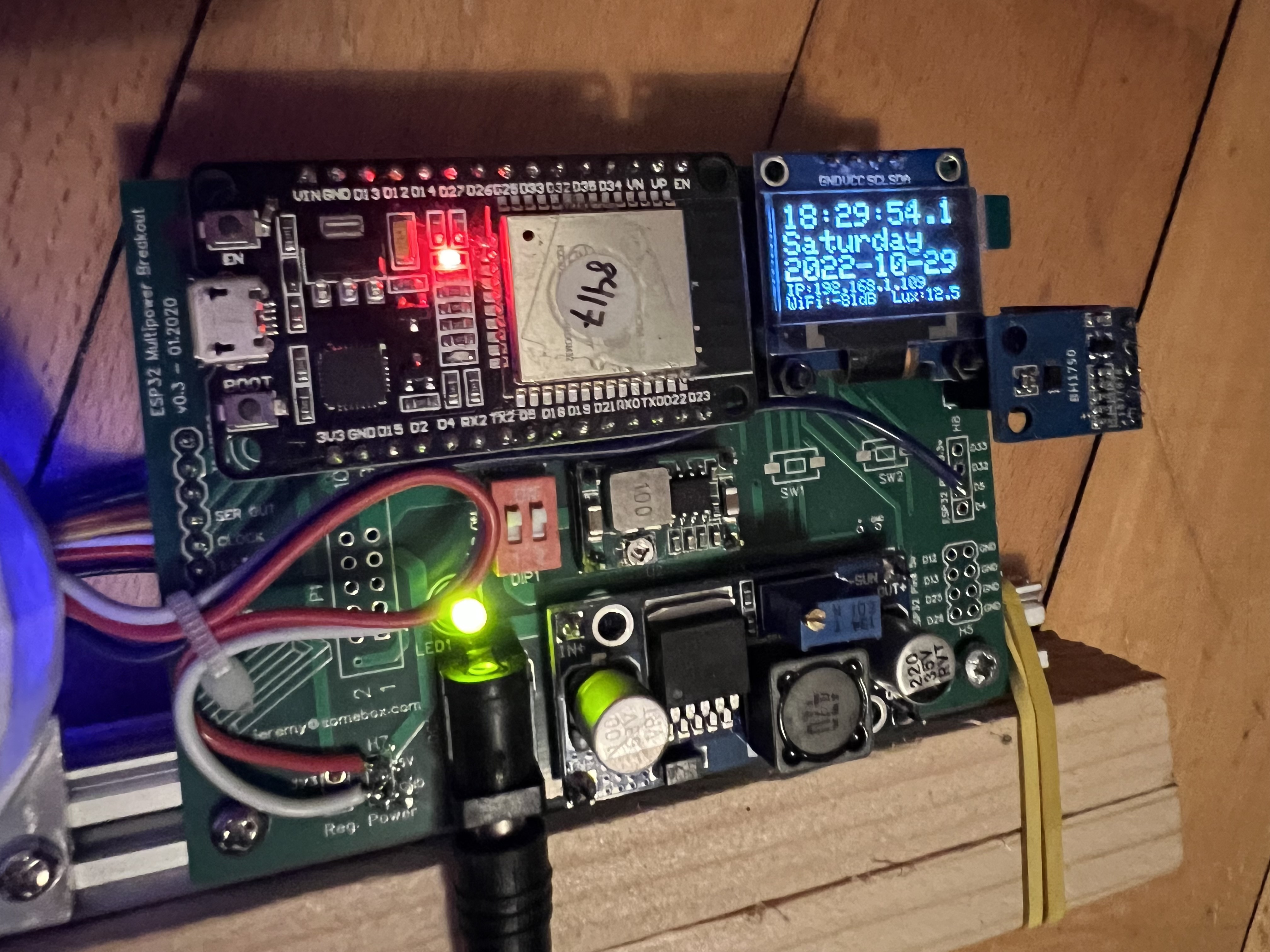 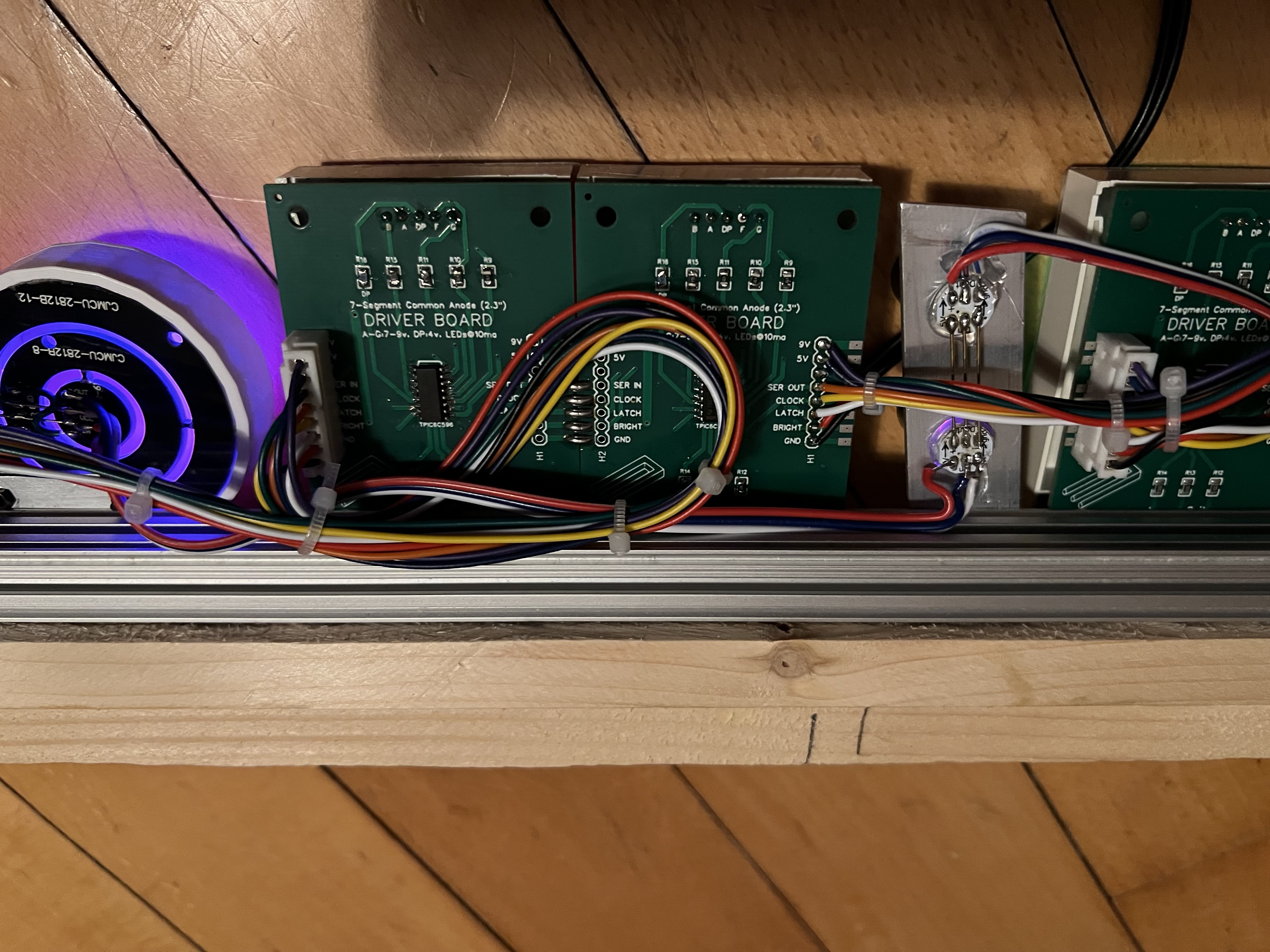