Repeatable builds - does not depend on user's local installation. Runs the same locally, as in CI

Earthly is a build automation tool for the container era. It allows you to execute all your builds in containers. This makes them self-contained, repeatable, portable and parallel. You can use Earthly to create Docker images and artifacts (eg binaries, packages, arbitrary files).

Earthly builds are self-contained, isolated and repeatable. Regardless of whether Earthly runs in your CI or on your laptop, there is a degree of guarantee that the build will run the same way. This allows for faster iteration on the build scripts and easier debugging when something goes wrong. No more git commit -m "try again".

Builds that run the same for everyone

Repeatable builds also mean that your build will run the same on your colleagues' laptop without any additional project-specific or language-specific setup. This fosters better developer collaboration and mitigates works-for-me type of issues.

From zero to working build in minutes

Jump from project to project with ease, regardless of the language they are written in. Running the project's test suites is simply a matter of running an Earthly target (without fiddling with project configuration to make it compile and run on your system). Contribute across teams with confidence.

A simple, yet powerful import system allows for reusability of builds across directories or even across repositories. Importing other builds does not have hidden environment-specific implications - it just works.

Taking some of the best ideas from Makefiles and Dockerfiles, Earthly combines two build specifications into one.

Where Does Earthly Fit?

Earthly is meant to be used both on your development machine and in CI. It can run on top of popular CI systems (like Jenkins, Circle, GitHub Actions). It is typically the layer between language-specific tooling (like maven, gradle, npm, pip, go build) and the CI build spec.

How Does It Work?

Earthly executes builds in containers, where execution is isolated. The dependencies of the build are explicitly specified in the build definition, thus making the build self-sufficient.

We use a target-based system to help users break-up complex builds into reusable parts. Nothing is shared between targets, other than clearly declared dependencies. Nothing shared means no unexpected race conditions. In fact, the build is executed in parallel whenever possible, without any need for the user to take care of any locking or unexpected environment interactions.

Install for VS code.

Here are some resources to get you started with Earthly

A simple example (for Go)

Invoke the build using earth +all.

Examples for other languages are available on the examples page.

Earthly can be used to reference and build targets from other directories or even other repositories. For example, if we wanted to build an example target from the github.com/earthly/earthly repository, we could issue

Use + to reference other targets and create complex build inter-dependencies. 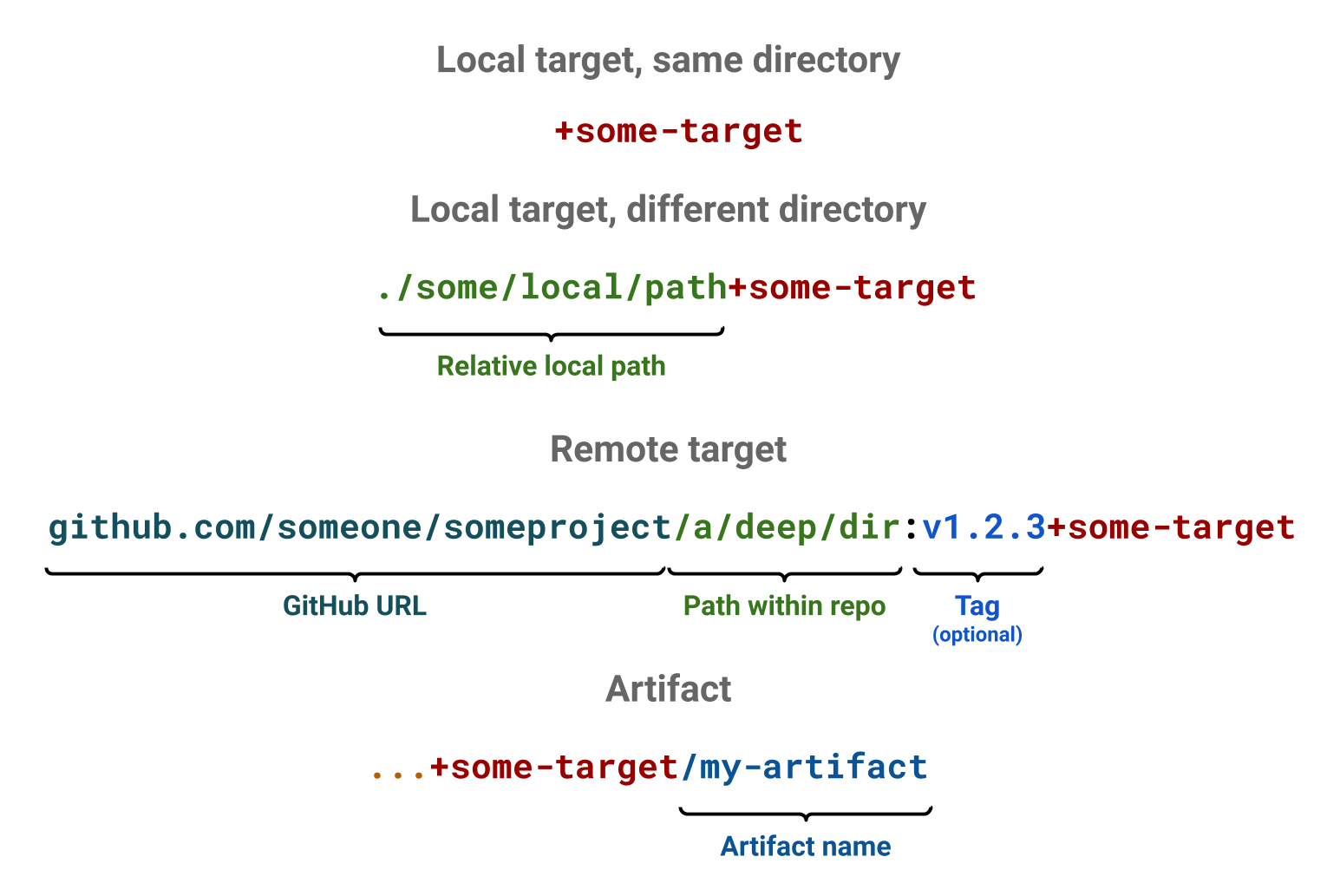 Caching that works the same as docker builds

Here is an example where building for multiple platforms can leverage build args.

Make use of build tools that work everywhere

No need to ask your team to install protoc, a specific version of Python, Java 1.6 or the .NET Core ecosystem. You only install once, in your Earthfile, and it works for everyone. Or even better, you can just make use of the rich Docker Hub ecosystem.

Secrets are never stored within an image's layers and they are only available to the commands that need them.

How is Earthly different from Dockerfiles?

Dockerfiles were designed for specifying the make-up of Docker images and that's where Dockerfiles stop. Earthly takes some key principles of Dockerfiles (like layer caching), but expands on the use-cases. For example, Earthly can output regular artifacts, run unit and integration tests and also create several Docker images at a time - all of which are outside the scope of Dockerfiles.

It is possible to use Dockerfiles in combination with other technologies (eg Makefiles or bash files) in order to solve for such use-cases. However, these combinations are difficult to parallelize, difficult to scale across repositories as they lack a robust import system and also they often vary in style from one team to another. Earthly does not have these limitations as it was designed as a general purpose build system.

As an example, Earthly introduces a richer target, artifact and image referencing system, which allows for better reuse in complex builds spanning a single large repository or multiple repositories. Because Dockerfiles are only meant to describe one image at a time, such features are outside the scope of applicability of Dockerfiles.

How do I tell apart classical Dockerfile commands from Earthly commands?

Check out the Earthfile reference doc page. It has all the commands there and it specifies which commands are the same as Dockerfile commands and which are new.

Yes! You can use the command FROM DOCKERFILE to inherit the commands in an existing Dockerfile.

How is Earthly different from Bazel?

Bazel is a build tool developed by Google for the purpose of optimizing speed, correctness and reproducibility of their internal monorepo codebase. Earthly draws inspiration from some of the principles of Bazel (mainly the idea of repeatable builds), but it is different in a few key ways:

Overall, compared to Bazel, Earthly sacrifices some correctness and reproducibility in favor of significantly better usability and composability with existing open-source technologies.

Earthly is licensed under the Mozilla Public License Version 2.0. See LICENSE for the full license text.

Build automation for the container era