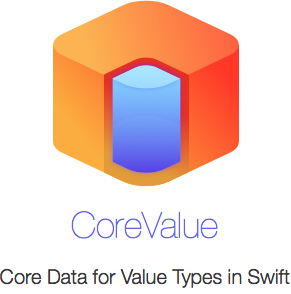 Swift introduced versatile value types into the iOS and Cocoa development domains. They're lightweight, fast, safe, enforce immutability and much more. However, as soon as the need for CoreData in a project manifests itself, we have to go back to reference types and @objc.

If you're porting your app to Swift 3, please see the Swift 3 section at the bottom.

That's it. Everything else it automated from here. Here're some examples of what you can do with Shop then:

If no NSPredicate is given, all objects for the selected Entity are returned.

Let's see what they do.

Boxing is the process of taking a value type and returning a NSManagedObject. CoreValue really loves you and that's why it does all the hard work for you via Swift's Reflection feature. See for yourself:

That's it. Your value type is now Core Data compliant. Just call aCounter.toObject(context) and you'll get a properly encoded NSManagedObject!

If you're interested, have a look at the internalToObject function in CoreValue.swift, which takes care of this.

Keen observers will have noted that the structure above actually doesn't implement the BoxingPersistentStruct protocol, but instead something different called BoxingStruct, what's happening here?

By default, Value types are immutable, so even if you define a property as a var, you still can't change it from within except by declaring your function mutable. Swift also doesn't allow us to define properties in protocol extensions, so any state that we wish to assign on a value type has to be via specific properties on the value type.

Since we cannot implicitly add any state whatsoever to a protocol, we have to do this explicitly. That's why there's a separate protocol for persistent storage:

The main difference here is the addition of objectID. Once this property is there, BoxingPersistentStruct's bag of wonders (.save, .delete, .mutatingToObject) can be used.

What's the usecase of the BoxingStruct protocol then, you may ask. The advantage is that BoxingStruct does not require your value type to be mutable, and does not extend it with any mutable functions by default, keeping it a truly immutable value type. It still can use .toObject to convert a value type into an NSManagedObject, however it can't modify this object afterwards. So it is still useful for all scenarios where you're only performing insertions (like a cache, or a log) or where any modifications are performed in bulk (delete all), or where updating will be performed on the NSManagedObject itself (.valueForKey, .save).

Then you have to make sure that all value types conform to the same boxing protocol, either BoxingPersistentStruct or BoxingStruct. The type checker cannot check this and report this as an error.

Most protocols in CoreValue mark the NSManagedObjectContext as an optional, which means that you don't have to supply it. Boxing will still work as expected, only the resulting NSManagedObjects will be ephemeral, that is, they're not bound to a context, they can't be stored. There're few use cases for this, but it is important to note that not supplying a NSManagedObjectContext will not result in an error.

UnboxingStruct can be applied to any struct or class that you intend to initialize from a NSManagedObject. It only has one requirement that needs to be implemented, and that's fromObject which takes a NSManagedObject and should return a value type. Here's a very simple and unsafe example:

Even though this example is not safe, we can observe several things from it. First, the implementation overhead is minimal. Second, the method can throw an error. That's because unboxing can fail in a multitude of ways (wrong value, no value, wrong entity, unknown entity, etc). If unboxing fails in any way, we throw an NSError. The other benefit of unboxing, that it allows us to take a shortcut (which CoreValue deviously copied from Argo). Utilizing several custom operators, the unboxing process can be greatly simplified:

This code takes the automatic initializer, curries it and maps it over multiple incarnations of unboxing functions (<|) until it can return a Counter (or throw an error).

But what about these weird runes? Here's an in-detail overview of what's happening here:

object <| "count" First operation: Take object, call valueForKey with the key "count" and assign this as the value for the first type of the curryed init function A

object <| "name" Second operation: Take object, call valueForKey with the key "count" and assign this as the value for the second type of the curryed init function B

Custom Operators are observed as a critical Swift feature, and rightly so. Too many of those make a codebase difficult to read and understand. The following custom operators are the same as in several other Swift Frameworks (see Runes and Argo). They're basically a verbatim copy from Haskell, so while that doesn't make them less custom or even official, they're at least unofficially agreed upon.

<| is not the only operator needed to encode objects. Here's a list of all supported operators:

Since most of the time you probably want boxing and unboxing functionality, CoreValue includes two handy type aliases, CVManagedStruct and CVManagedPersistentStruct which contain Boxing and Unboxing in one type.

By extending RawRepresentable, you can use Swift enums right away without having to first make sure your enum conforms to CVManagedStruct.

Have a look at CoreValue.swift, it's full of docstrings

Alternatively, there's a lot of usage in the Unit Tests.

Here's a more complex example of CoreValue in use:

Please not that CVManagedUniqueStruct adds an (roughly) O(n) overhead on top of NSManagedObjectID based solutions due to the way object lookup is currently implemented.

All Core Data Datatypes are supported, with the following exceptions:

Fetched properties are not supported yet.

The Swift 3.0 conversion changed a few things within the framework. In order to make it easier, here's a list of things to do:

Add the following to your Podfile:

You will also need to make sure you're opting into using frameworks:

Then run pod install with CocoaPods 1.01 or newer.

Add the following to your Cartfile:

Follow the current instructions in Carthage's README for up to date installation instructions.

The import CoreValue directive is required in order to use CoreValue.

There is no need for import CoreValue when manually installing.

Updated to most recent Swift 2.0 b4 changes

CoreValue uses ideas and code from thoughtbot's Argo framework for JSON decoding. Most notably their curry implementation. Have a look at it, it is an awesome framework.

The CoreValue source code is available under the MIT License.