patat (Presentations Atop The ANSI Terminal) is a small tool that allows you to show presentations using only an ANSI terminal. It does not require ncurses. 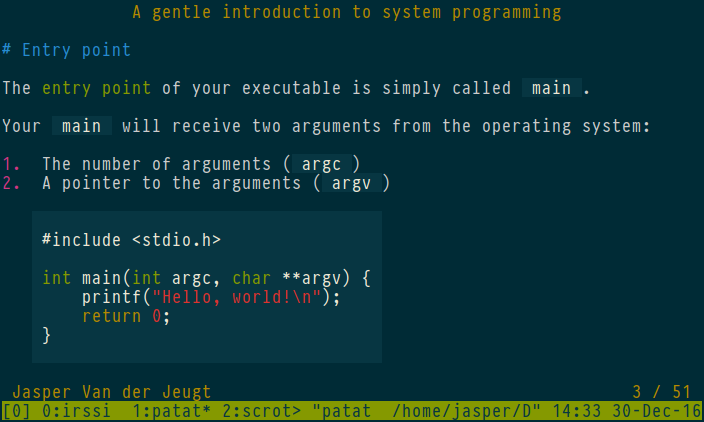 Homebrew packages are offered by a third-party repository:

For issues and feedback please refer to nicholasdille/homebrew-tap.

Installation from source is very easy. You can build from source using stack install or cabal install. patat is also available from Hackage.

For people unfamiliar with the Haskell ecosystem, this means you can do either of the following:

: If you provide the --watch flag, patat will watch the presentation file for changes and reload automatically. This is very useful when you are writing the presentation.

: Run the presentation even if the terminal claims it does not support ANSI features.

: Just dump all the slides to stdout. This is useful for debugging.

The r key is very useful since it allows you to preview your slides while you are writing them. You can also use this to fix artifacts when the terminal is resized.

The input format can be anything that Pandoc supports. Plain markdown is usually the most simple solution:

However, if you prefer not use these since they are a bit intrusive in the markdown, you can also start every slide with a header. In that case, the file should not contain a single horizontal ruler.

This means the following document is equivalent to the one we saw before:

Patat supports comments which can be used as speaker notes.

patat is fairly configurable. The configuration is done using YAML. There are two places where you can put your configuration:

For example, we set an option key to val by using the following file:

Or we can use a normal presentation and have the following $HOME/.patat.yaml:

Line wrapping can be enabled by setting wrap: true in the configuration. This will re-wrap all lines to fit the terminal width better.

Margins can be enabled by setting a margins entry in the configuration:

This example configuration will generate slides with a margin of 10 characters on the left, and break lines 10 characters before they reach the end of the terminal's width.

It is recommended to enable line wrapping along with this feature.

By setting autoAdvanceDelay to a number of seconds, patat will automatically advance to the next slide.

Note that changes to autoAdvanceDelay are not picked up automatically if you are running patat --watch. This requires restarting patat.

You can control the way slide splitting works by setting the slideLevel variable. This variable defaults to the least header that occurs before a non-header, but it can also be explicitly defined. For example, in the following document, the slideLevel defaults to 2:

With slideLevel 2, the h1 will turn into a "title slide", and the h2 will be displayed at the top of the second slide. We can customize this by setting slideLevel manually:

Now, we will only see one slide, which contains a nested header.

By default, slides are always displayed "all at once". If you want to display them fragment by fragment, there are two ways to do that. The most common case is that lists should be displayed incrementally.

This can be configured by settings incrementalLists to true in the metadata block:

Another way to break up slides is to use a pagraph only containing three dots separated by spaces. For example, this slide has two pauses:

Colors and other properties can also be changed using this configuration. For example, we can have:

The properties that can be given a list of styles are:

The accepted styles are:

Also accepted are styles of the form rgb#RrGgBb and onRgb#RrGgBb, where Rr Gg and Bb are hexadecimal bytes (e.g. rgb#f08000 for an orange foreground, and onRgb#101060 for a deep purple background). Naturally, your terminal needs to support 24-bit RGB for this to work. When creating portable presentations, it might be better to stick with the named colours listed above.

As part of theming, syntax highlighting is also configurable. This can be configured like this:

decVal refers to "decimal values". This is known as a "token type". For a full list of token types, see this list -- the names are derived from there in an obvious way.

Note that in order to get syntax highlighting to work, you should annotate code blocks with the language, e.g. using a fenced code block:

Pandoc comes with a fair number of extensions on top of markdown, listed here.

patat enables a number of them by default, but this is also customizable.

In order to enable an additional extensions, e.g. autolink_bare_uris, add it to the pandocExtensions field in the YAML metadata:

The patat_extensions in the above snippet refers to the default set of extensions enabled by patat. If you want to disable those and only use a select few extensions, simply leave it out and choose your own:

If you don't want to enable any extensions, simply set pandocExtensions to the empty list [].

patat-0.8.0.0 and newer include images support for some terminal emulators.

If images is enabled (not by default), patat will draw slides that consist only of a single image just by drawing the image, centered and resized to fit the terminal window.

By default, patat will print a breadcrumbs-style header, e.g.:

This feature can be turned off by using:

patat can evaluate code blocks and show the result. You can register an evaluator by specifying this in the YAML metadata:

An arbitrary amount of evaluators can be specified, and whenever a a class attribute on a code block matches the evaluator, it will be used.

Note that executing arbitrary code is always dangerous, so double check the code of presentations downloaded from the internet before running them if they contain eval settings.

Aside from the command, there are two more options:

Setting fragment: false and replace: true offers a way to "filter" code blocks, which can be used to render ASCII graphics.

This feature works by simply by:

"Patat" is the Flemish word for a simple potato. Dutch people also use it to refer to French Fries but I don't really do that -- in Belgium we just call fries "Frieten".

The idea of patat is largely based upon MDP which is in turn based upon VTMC. I wanted to write a clone using Pandoc because I ran into a markdown parsing bug in MDP which I could not work around. A second reason to do a Pandoc-based tool was that I would be able to use Literate Haskell as well. Lastly, I also prefer not to install Node.js on my machine if I can avoid it.