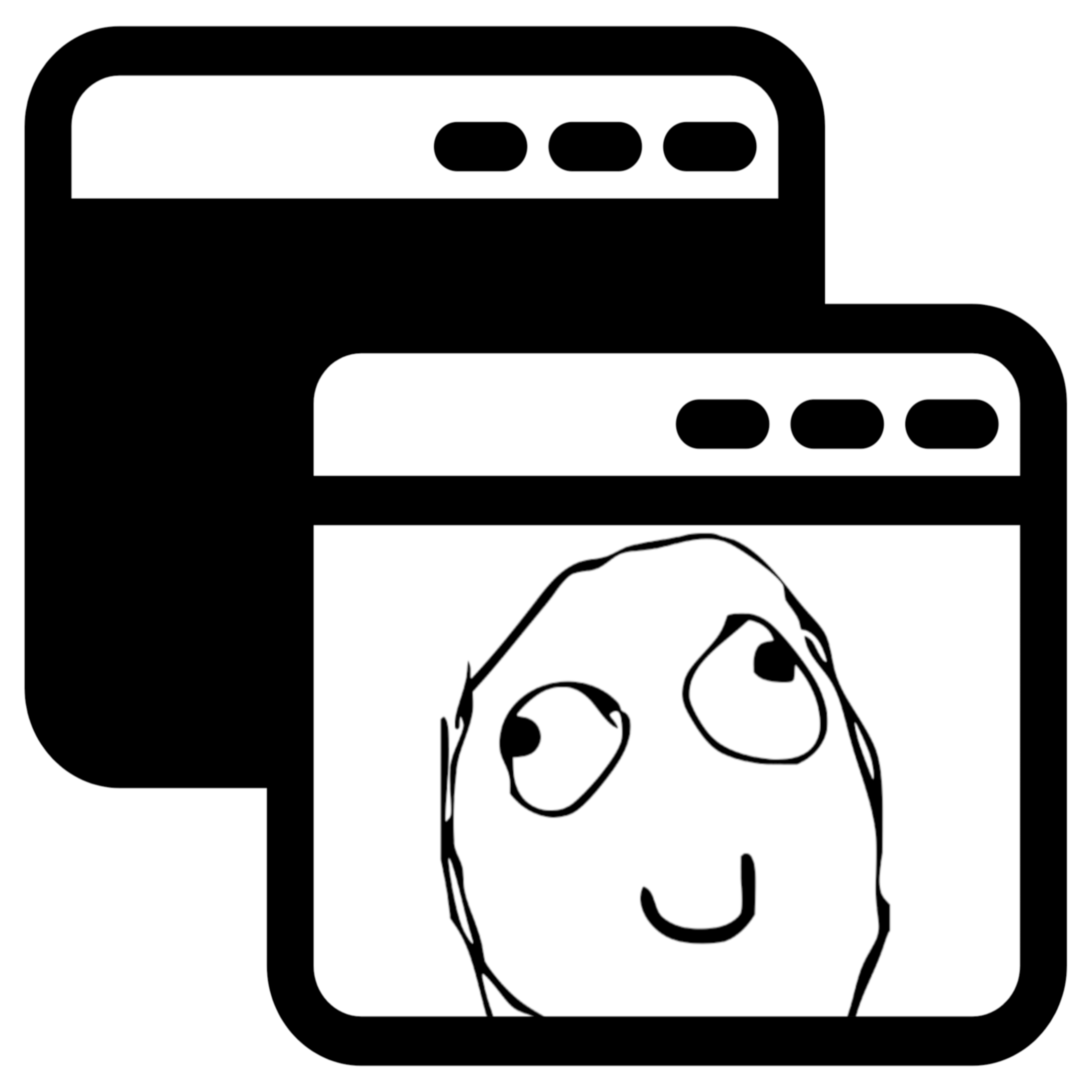 Process Herpaderping is a method of obscuring the intentions of a process by modifying the content on disk after the image has been mapped. This results in curious behavior by security products and the OS itself.

Generally, a security product takes action on process creation by registering a callback in the Windows Kernel (PsSetCreateProcessNotifyRoutineEx). At this point, a security product may inspect the file that was used to map the executable and determine if this process should be allowed to execute. This kernel callback is invoked when the initial thread is inserted, not when the process object is created.

Because of this, an actor can create and map a process, modify the content of the file, then create the initial thread. A product that does inspection at the creation callback would see the modified content. Additionally, some products use an on-write scanning approach which consists of monitoring for file writes. A familiar optimization here is recording the file has been written to and defer the actual inspection until IRP_MJ_CLEANUP occurs (e.g. the file handle is closed). Thus, an actor using a write -> map -> modify -> execute -> close workflow will subvert on-write scanning that solely relies on inspection at IRP_MJ_CLEANUP.

You'll see in the demo below, CMD.exe is used as the execution target. The first run overwrites the bytes on disk with a pattern. The second run overwrites CMD.exe with ProcessHacker.exe. The Herpaderping tool fixes up the binary to look as close to ProcessHacker.exe as possible, even retaining the original signature. Note the multiple executions of the same binary and how the process looks to the user compared to what is in the file on disk. 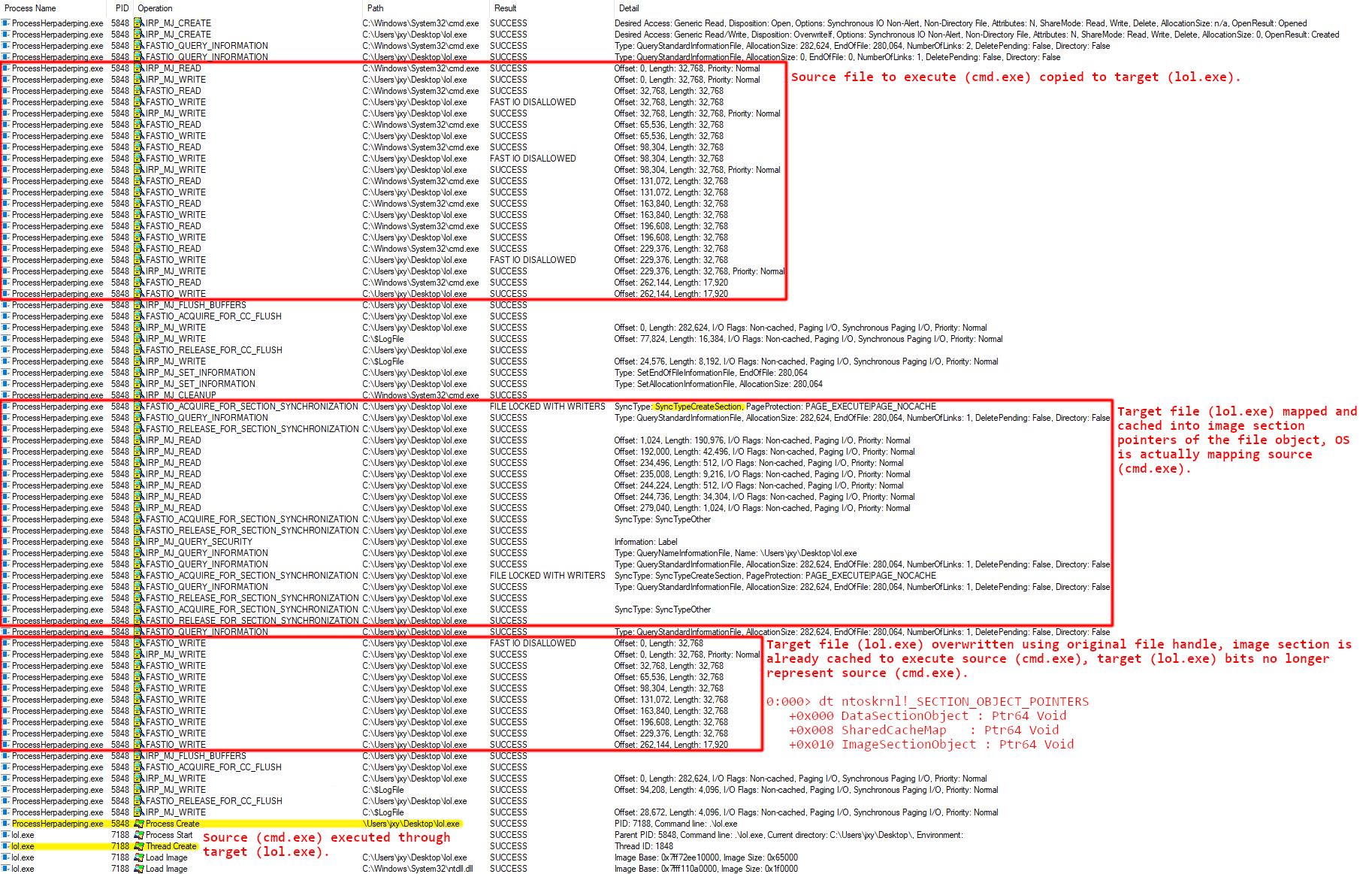 We've observed the behavior and some of this may be surprising. Let's try to explain this behavior.

When designing products for securing Windows platforms, many engineers in this field (myself included) have fallen on preconceived notions with respect to how the OS will handle data. In this scenario, some might expect the file on disk to remain "locked" when the process is created. You can't delete the file. You can't write to it. But you can rename it. Seen here, under the right conditions, you can in fact write to it. Remain vigilant on your assumptions, always question them, and do your research.

The motivation for this research came about when discovering how to do analysis when a file is written. With prior background researching process Hollowing and Doppelganging, I had theorized this might be possible. The goal is to provide better security. You cannot create a better lock without first understanding how to break the old one.

Herpaderping is similar to Hollowing and Doppelganging however there are some key differences:

Process Hollowing involves modifying the mapped section before execution begins, which abstractly this looks like: map -> modify section -> execute. This workflow results in the intended execution flow of the Hollowed process diverging into unintended code. Doppelganging might be considered a form of Hollowing. However, Hollowing, in my opinion, is closer to injection in that Hollowing usually involves an explicit write to the already mapped code. This differs from Herpaderping where there are no modified sections.

For reference, the generalized techniques:

We can see the differences laid out here. While Herpaderping is arguably noisier than Doppelganging, in that the malicious bits do hit the disk, we've seen that security products are still incapable of detecting Herpaderping.

There is not a clear fix here. It seems reasonable that preventing an image section from being mapped/cached when there is write access to the file should close the hole. However, that may or may not be a practical solution.

Another option might be to flush the changes to the file through to the cached image section if it hasn't yet been mapped into a process. However, since the map into the new process occurs at NtCreateProcess that is probably not a viable solution.

From a detection standpoint, there is not a great way to identify the actual bits that got mapped, inspection at IRP_MJ_CLEANUP or a callback registered at PsSetCreateProcessNotifyRoutineEx results in incorrect attribution since the bits on disk have been changed, you would have to rebuild the file from the section that got created. It's worth pointing out here there is a new callback in Windows 10 you may register for PsSetCreateProcessNotifyRoutineEx2 however this suffers from the same problem as the previous callback, it's called out when the initial thread is executed, not when the process object is created. Microsoft did add PsSetCreateThreadNotifyRoutineEx which is called out when the initial thread is inserted if registered with PsCreateThreadNotifyNonSystem, opposed to when it is about to begin execution (as the old callback did). Extending PSCREATEPROCESSNOTIFYTYPE to be called out when the process object is created won't help either, we've seen in the Diving Deeper section that the image section object is cached on the NtCreateSection call not NtCreateProcess.

We can't easily identify what got executed. We're left with trying to detect the exploitive behavior by the actor, I'll leave discovery of the behavior indicators as an exercise for the reader.

Below is a list of products and Windows OSes that have been tested as of (8/31/2020). Tests were carried out with a known malicious binary.

This vulnerability was disclosed to the Microsoft Security Response Center (MSRC) on 7/17/2020 and a case was opened by MSRC on 7/22/2020. MSRC concluded their investigation on 8/25/2020 and determined the findings are valid but do not meet their bar for immediate servicing. At this time their case is closed, without resolution, and is marked for future review, with no timeline.

We disagree on the severity of this bug; this was communicated to MSRC on 8/27/2020.

This repo contains a tool for exercising the Herpaderping method of process obfuscation. Usage is as follows:

The repo uses submodules, after cloning be sure to init and update the submodules. Projects files are targeted to Visual Studio 2019.

The following are used without modification. Credits to their authors.