Gradio is an open-source Python library that is used to build machine learning and data science demos and web applications.

With Gradio, you can quickly create a beautiful user interface around your machine learning models or data science workflow and let people "try it out" by dragging-and-dropping in their own images, pasting text, recording their own voice, and interacting with your demo, all through the browser. 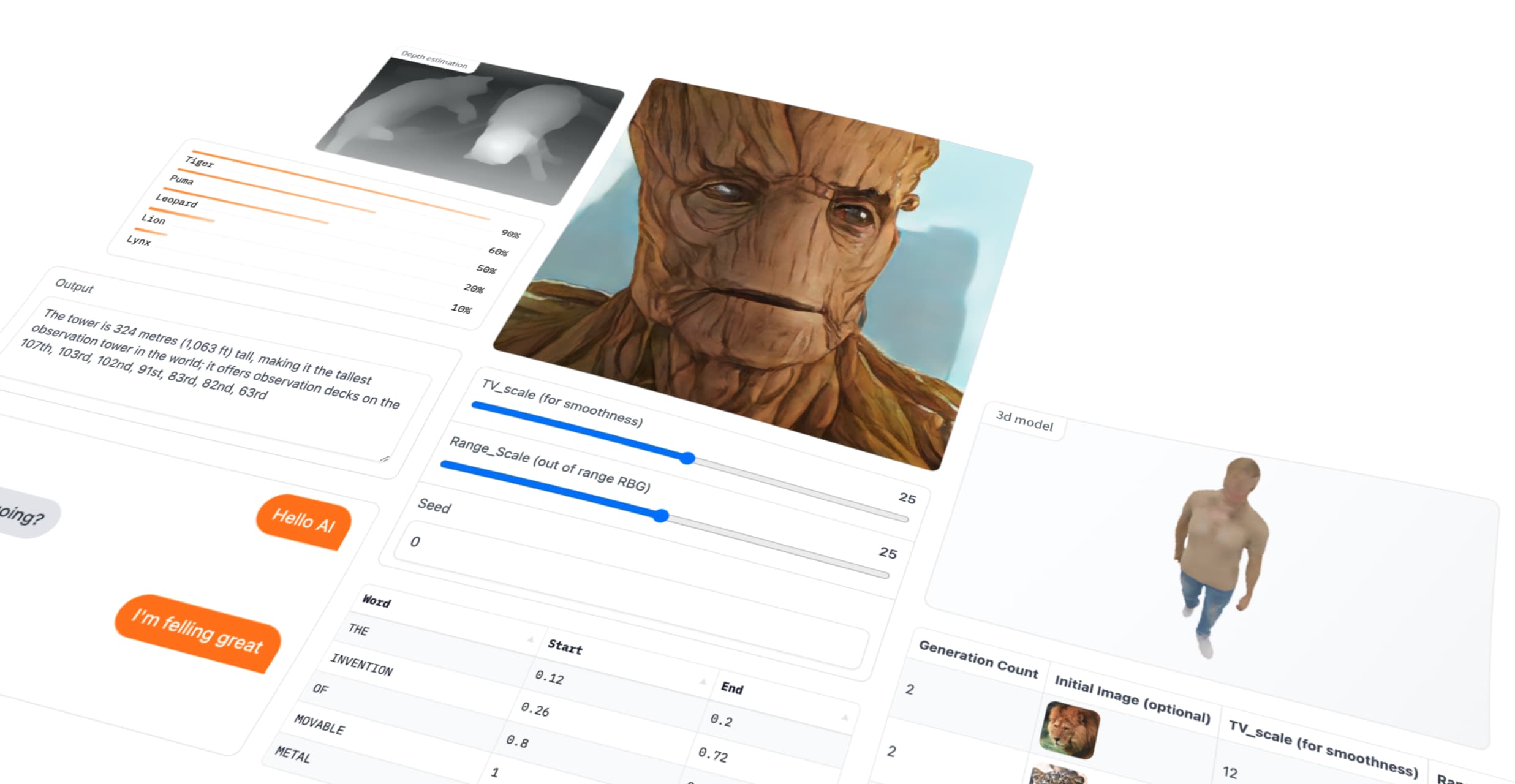 Gradio is useful for:

What Does Gradio Do?

One of the best ways to share your machine learning model, API, or data science workflow with others is to create an interactive app that allows your users or colleagues to try out the demo in their browsers.

Gradio allows you to build demos and share them, all in Python. And usually in just a few lines of code! So let's get started.

To get Gradio running with a simple "Hello, World" example, follow these three steps:

2. Run the code below as a Python script or in a Jupyter Notebook (or Google Colab):

3. The demo below will appear automatically within the Jupyter Notebook, or pop in a browser on http://localhost:7860 if running from a script:

You'll notice that in order to make the demo, we created a gradio.Interface. This Interface class can wrap any Python function with a user interface. In the example above, we saw a simple text-based function, but the function could be anything from music generator to a tax calculator to the prediction function of a pretrained machine learning model.

The core Interface class is initialized with three required parameters:

Let's take a closer look at these components used to provide input and output.

We saw some simple Textbox components in the previous examples, but what if you want to change how the UI components look or behave?

Let's say you want to customize the input text field — for example, you wanted it to be larger and have a text placeholder. If we use the actual class for Textbox instead of using the string shortcut, you have access to much more customizability through component attributes.

Suppose you had a more complex function, with multiple inputs and outputs. In the example below, we define a function that takes a string, boolean, and number, and returns a string and number. Take a look how you pass a list of input and output components.

Gradio supports many types of components, such as Image, DataFrame, Video, or Label. Let's try an image-to-image function to get a feel for these!

When using the Image component as input, your function will receive a NumPy array with the shape (width, height, 3), where the last dimension represents the RGB values. We'll return an image as well in the form of a NumPy array.

You can also set the datatype used by the component with the type= keyword argument. For example, if you wanted your function to take a file path to an image instead of a NumPy array, the input Image component could be written as:

Also note that our input Image component comes with an edit button 🖉, which allows for cropping and zooming into images. Manipulating images in this way can help reveal biases or hidden flaws in a machine learning model!

You can read more about the many components and how to use them in the Gradio docs.

1. Interface, that provides a high-level abstraction for creating demos that we've been discussing so far.

2. Blocks, a low-level API for designing web apps with more flexible layouts and data flows. Blocks allows you to do things like feature multiple data flows and demos, control where components appear on the page, handle complex data flows (e.g. outputs can serve as inputs to other functions), and update properties/visibility of components based on user interaction — still all in Python. If this customizability is what you need, try Blocks instead!

Let's take a look at a simple example. Note how the API here differs from Interface.

Here's an app to give you a taste of what's possible with Blocks:

A lot more going on here! We'll cover how to create complex Blocks apps like this in the building with blocks section for you.

Congrats, you're now familiar with the basics of Gradio! Go to our next guide to learn more about the key features of Gradio.

Gradio is built with many wonderful open-source libraries, please support them as well!

Gradio is licensed under the Apache License 2.0 found in the LICENSE file in the root directory of this repository.

Also check out the paper Gradio: Hassle-Free Sharing and Testing of ML Models in the Wild, ICML HILL 2019, and please cite it if you use Gradio in your work.