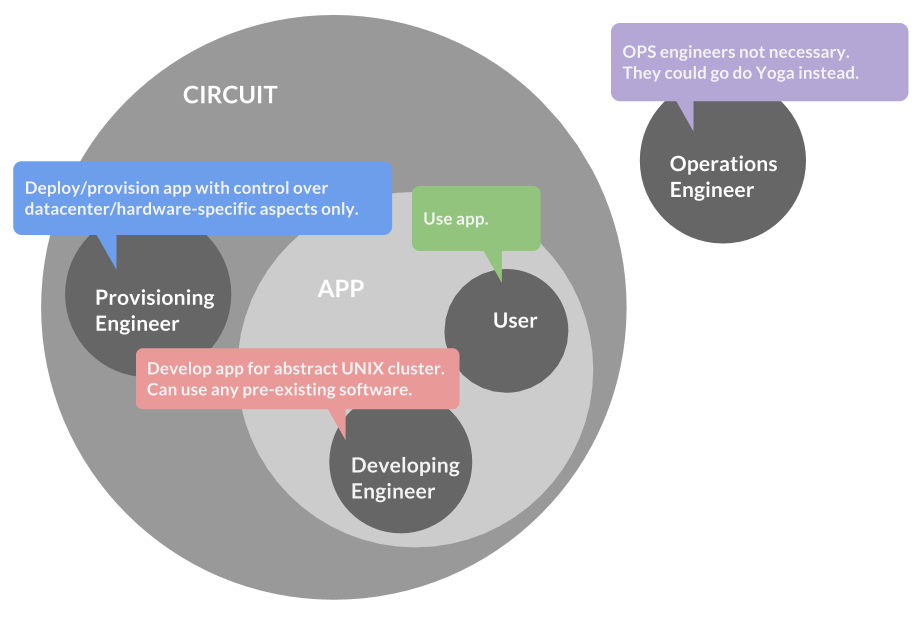 The CIRCUIT is a new way of thinking. It is deceptively similar to existing software, while being quite different.

Circuit is a programmable platform-as-a-service (PaaS) and/or Infrastructure-as-a-Service (IaaS), for management, discovery, synchronization and orchestration of services and hosts comprising cloud applications.

Circuit was designed to enable clear, accountable and safe interface between the human engineering roles in a technology enterprise, ultimately increasing productivity. Engineering role separation in a typical circuit-based architecture is illustrated above. 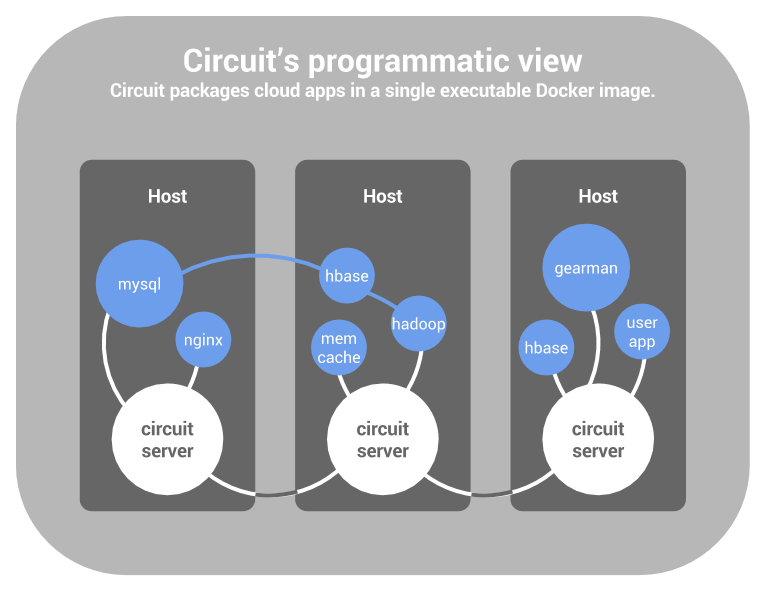 Users of circuit are

A few technical features of circuit:

In a typical circuit scenario:

None of these related products sees the cluster as a closed system. In this way, the circuit is different than all. This is explained in precise terms in the next section.

The circuit is a tiny server process which runs instances on a cluster of machines to form an efficient, churn-resilient network, which enables distributed process orchestration and synchronization from any one machine.

Some of the target applications of the circuit are:

Dive straight into it with the Quick Start slide deck.

For a conceptual introduction to The Circuit, check out the GopherCon 2014 Video. Since this video was recorded, the API-via-file-system approach was abandoned in favor of a simpler command-line tool and a Go client library.

Also take a look at the faux animated illustration of the Advanced Tutorial: Watchbot with a back channel.

The circuit is a tool for executing and synchronizing UNIX processes across entire clusters by means of a command-line tool and a client library.

The circuit comes as one binary, which serves the purpose of a server and a command-line client.

The Circuit comprises one small binary. It can be built for Linux and Darwin.

Given that the Go Language compiler is installed, you can build and install the circuit binary with one line:

The same command is used for all instances. The -if option specifies the desired network interface to bind to, while the -discover command specifies a desired IP address of a UDP multicast channel to be used for automatic server-server discover.

The -discover option can be omitted by setting the environment variable CIRCUIT_DISCOVER to equal the desired multicast address.

To run the circuit server on the first machine, pick a public IP address and port for it to listen on, and start it like so

The circuit server will print its own circuit URL on its standard output. It should look like this:

Copy it. We will need it to tell the next circuit server to “join” this one in a network, i.e. circuit.

Log onto another machine and similarly start a circuit server there, as well. This time, use the -j option to tell the new server to join the first one:

You now have two mutually-aware circuit servers, running on two different hosts in your cluster. 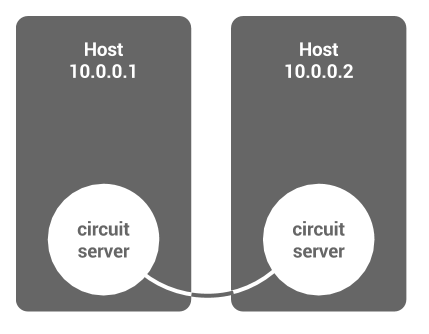 You can join any number of additional hosts to the circuit environment in a similar fashion, even billions. The circuit uses a modern expander graph-based algorithm for presence awareness and ordered communication, which is genuinely distributed; It uses communication and connectivity sparingly, hardly leaving a footprint when idle.

The purpose of each circuit server is to host a collection of control primitives, called elements, on behalf of the user. On each server the hosted elements are organized in a hierarchy (similarly to the file system in Apache Zookeeper), whose nodes are called anchors. Anchors (akin to file system directories) have names and each anchor can host one circuit element or be empty.

The hierarchies of all servers are logically unified by a global circuit root anchor, whose children are the individual circuit server hierarchies. A typical anchor path looks like this

The first component of the path is the ID of the circuit server hosting the leaf anchor.

Creating and interacting with circuit elements is the mechanism through which the user controls and reflects on their distributed application. This can be accomplished by means of the included Go client library, or using the command-line tool embodied in the circuit executable itself.

Process elements are used to execute, monitor and synchronize OS-level processes at the hosting circuit server. They allow visibility and control over OS processes from any machine in the circuit cluster, regardless of the physical location of the underlying OS process.

Channel elements are a synchronization primitive, similar to the channels in Go, whose send and receive sides are accessible from any location in the circuit cluster, while their data structure lives on the circuit server hosting their anchor.

Clients (the tool or your own) dial into a circuit server in order to interact with the entire system. All servers are equal citizens in every respect and, in particular, any one can be used as a choice for dial-in. 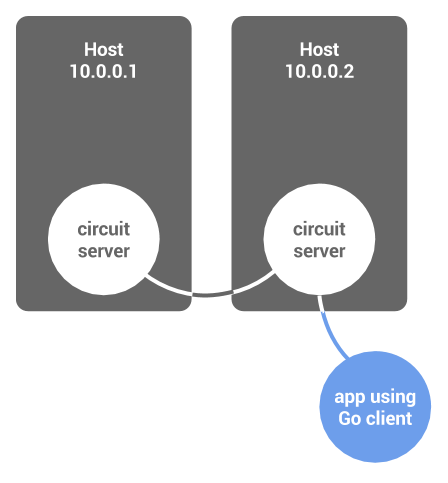 The tool (described in more detail later) is essentially a set of commands that allow you to traverse the global hierarchical namespace of circuit elements, and interact with them, somewhat similarly to how one uses the Zookeeper namespace.

For example, to list the entire circuit cluster anchor hierarchy, type in

The two root-level anchors correspond to the two circuit servers. 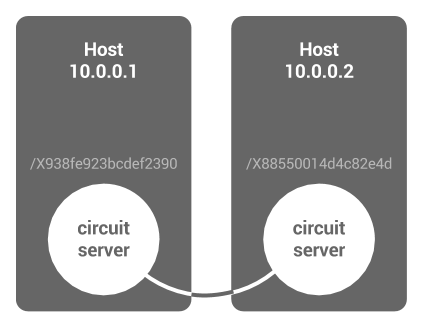 Pointing the tool to your circuit cluster

Before you can use the circuit tool, you need to tell it how to locate one circuit server for us a dial-in point.

There are two ways to provide the dial-in server address to the tool:

Or, equivalently, by setting the environment variable CIRCUIT to point to a file whose contents is the desired dial-in address. For example, (in bash):

A more detailed explanation of their meaning and function can be found in the documentation of the client package, github.com/gocircuit/client.

Here are a few examples. To run a new process on some chosen cluster machine, first see what machines are available: 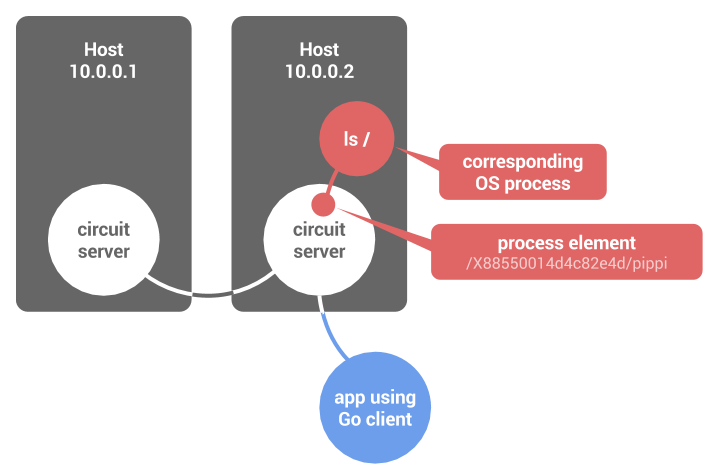 Close the standard input to indicate no intention to write to it:

Read the output (note that the output won't show until you close the standard input first, as shown above):

Remove the process element from the anchor hierarchy

Much like for the case of OS processes, the circuit can create, manage and synchronize Docker containers, and attach the corresponding docker elements to a path in the anchor file system.

To allow creation of docker elements, any individual server must be started with the -docker switch. For instance:

To create and execute a new docker container, using the tool: 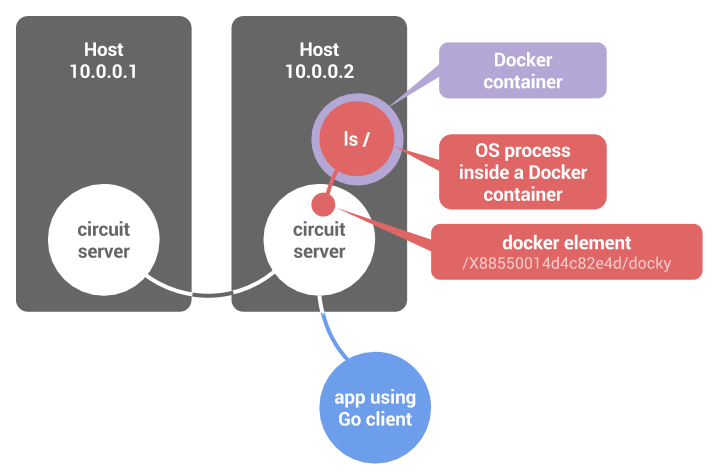 The remaining docker element commands are identical to those for processes: stdin, stdout, stderr, peek and wait. In one exception, peek will return a detailed description of the container, derived from docker inspect.

Again, take a look at what servers are available:

The last argument of this line is the channel buffer capacity, analogously to the way channels are created in Go. 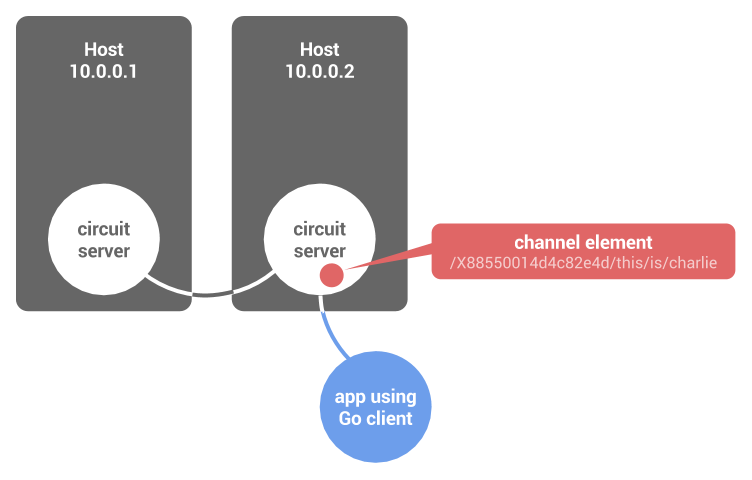 Verify the channel was created:

Sending a message to the channel is accomplished with the command

The contents of the message is read out from the standard input of the command above. This command will block until a receiver is available, unless there is free space in the channel buffer for a message.

When the command unblocks, it will send any data to the receiver. If there is no receiver, but there is a space in the message buffer, the command will also unblock and consume its standard input (saving it for an eventual receiver) but only up to 32K bytes.

Receiving is accomplished with the command

The received message will be produced on the standard output of the command above.

Circuit allows you to create and dynamically configure one or more DNS server elements on any circuit server.

As before, pick an available circuit server, say X88550014d4c82e4d. Create a new DNS server element, like so

This will start a new DNS server on the host of the given circuit server, binding it to an available port. Alternatively, you can supply an IP address argument specifying the bind address, as in

Either way, you can always retrieve the address on which the DNS server is listening by peeking into the corresponding circuit element:

This command will produce an output similar to this

Once the DNS server element has been created, you can add resource records to it, one at a time, using

Resource records use the canonical syntax, described in various RFCs. You can find a list of such RFCs as well as examples in the DNS Go library that underlies our implementation: github.com/miekg/dns/dns.go

All records, associated with a given name can be removed with a single command:

The current set of active records can be retrieved by peeking into the element:

Assuming that a name has multiple records associated with it, peeking would produce an output similar to this one:

The circuit provides two special element types @join and @leave, called subscriptions. Their job is to notify you when new circuit servers join the systems or others leave it. Both of them behave like receive-only channels.

The join subscription delivers a new message each time a cicruit server joins the system. The received message holds the anchor path of the new server.

Similarly, the leave subscription delivers a new message each time a circuit server disappears from the system.

The circuit allows for unusual flexibilities in process orchestration. Take a look, for instance, at the two “watchbot” tutorials which demonstrate how to implement a semi-resilient self-sustained mechanism within a cluster. Find the simpler one here

And the more elaborate one, which demonstrate use of channels, here

By default, circuit servers and clients communicate over plaintext TCP. A HMAC-based symmetric authentication, followed by an asymmetric RC4 stream cipher is supported.

To enable encryption, use the -hmac command-line option to point the circuit executable to a file containing the private key for your circuit. For instance:

Or, if you are invoking the tool:

Alternatively, you can set the environment CIRCUIT_HMAC to point to the private key file.

To generate a new private key for your circuit, use the command

From a networking and protocol standpoint, circuit servers and clients are peers: All communications (server-server and server-client) use a common RPC framework which often entails a server being able to reverse-dial into a client.

For this reason, circuit clients (the circuit tool or your apps) CANNOT be behind a firewall with respect to the servers they are dialing into.

The Go client for writing circuit apps is package

The public interface of this package is self-contained. Other packages in the circuit repo are internal.

Tutorials can be found within the client package directory

Additionally, the circuit binary directory contains the implementation of the circuit tool, which is itself built using the client and is another comprehensive example of a circuit app. It can be found in

To stay up to date with new developments, documentation and articles, follow The Circuit Project on Twitter @gocircuit or me @maymounkov.

Please, tweet about the circuit (mention @gocircuit). Tweets are a much appreciated donation and they help us and our sponsors gauge the interest in this unconventional idea.