This is a Torch implementation of "Deep Residual Learning for Image Recognition",Kaiming He, Xiangyu Zhang, Shaoqing Ren, Jian Sun the winners of the 2015 ILSVRC and COCO challenges.

What's working: CIFAR converges, as per the paper.

What's not working yet: Imagenet. I also have only implemented Option (A) for the residual network bottleneck strategy.

For this test, our goal is to reproduce Figure 6 from the original paper: 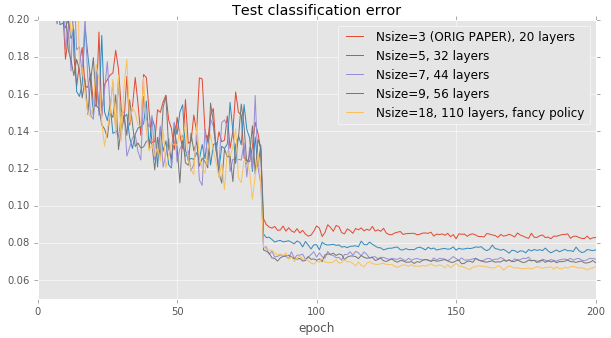 We can reproduce the results from the paper to typically within 0.5%. In all cases except for the 32-layer network, we achieve very slightly improved performance, though this may just be noise.

¹: For this run, we started from a learning rate of 0.001 until the first 400 iterations. We then raised the learning rate to 0.1 and trained as usual. This is consistent with the actual paper's results.

²: Note that the paper reports the best run from five runs, as well as the mean. I consider the mean to be a valid test protocol, but I don't like reporting the 'best' score because this is effectively training on the test set. (This method of reporting effectively introduces an extra parameter into the model--which model to use from the ensemble--and this parameter is fitted to the test set)

This experiment explores the effect of different NN architectures that alter the "Building Block" model inside the residual network. 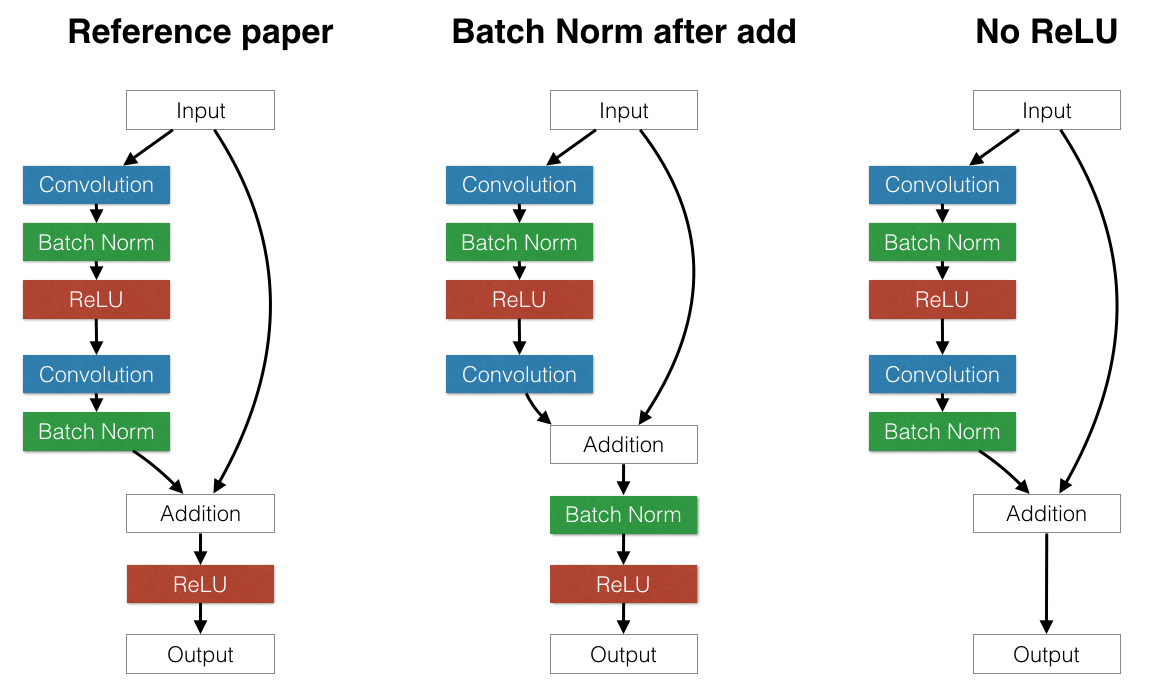 To test these strategies, we repeat the above protocol using the smallest (20-layer) residual network model.

(Note: The other experiments all use the leftmost "Reference" model.) 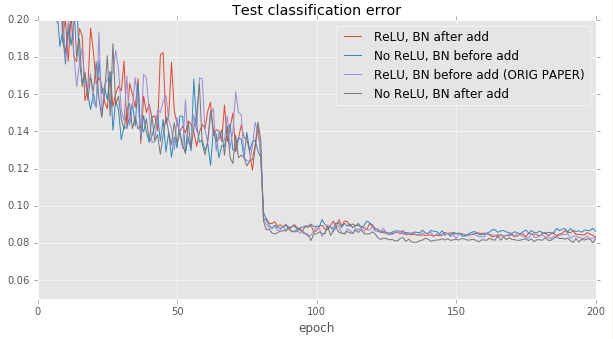 All methods achieve accuracies within about 0.5% of each other. Removing ReLU and moving the batch normalization after the addition seems to make a small improvement on CIFAR, but there is too much noise in the test error curve to reliably tell a difference. 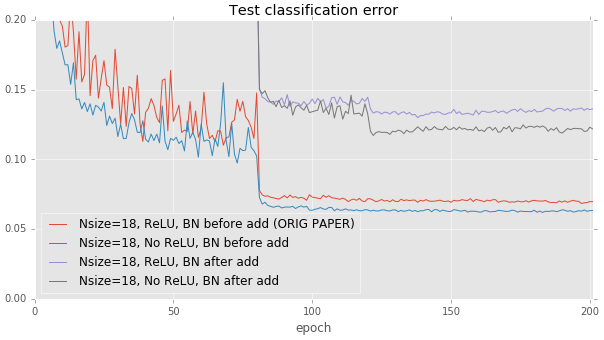 @ducha-aiki is performing preliminary experiments on imagenet. For ordinary CaffeNet networks, @ducha-aiki found that putting batch normalization after the ReLU layer may provide a small benefit compared to putting it before.

Can we improve on the basic SGD update rule with Nesterov momentum? This experiment aims to find out. Common wisdom suggests that alternate update rules may converge faster, at least initially, but they do not outperform well-tuned SGD in the long run. 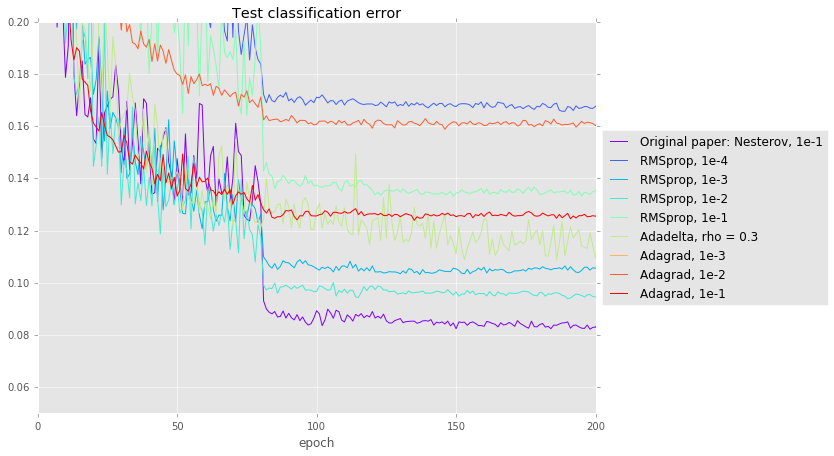 In our experiments, vanilla SGD with Nesterov momentum and a learning rate of 0.1 eventually reaches the lowest test error. Interestingly, RMSPROP with learning rate 1e-2 achieves a lower training loss, but overfits.

¹: Adadelta does not use a learning rate, so we did not use the same learning rate policy as in the paper. We just let it run until convergence.

See Andrej Karpathy's CS231N notes for more details on each of these learning strategies.

Deeper networks are more prone to overfitting. Unlike the earlier experiments, all of these models (except Adagrad with a learning rate of 1e-3) achieve a loss under 0.1, but test error varies quite wildly. Once again, using vanilla SGD with Nesterov momentum achieves the lowest error.

The strictest interpretation of the original batch normalization paper is to calculate the mean and standard deviation across the entire training set at every update. This takes too long in practice, so the exponential average is usually used instead.

We attempt to see whether batch normalization momentum affects anything. We try different values away from the default, along with a "dynamic" update strategy that sets the momentum to 1 / (1+n), where n is the number of batches seen so far (N resets to 0 at every epoch). At the end of training for a certain epoch, this means the batch normalization's running mean and standard deviation is effectively calculated over the entire training set.

None of these effects appear to make a significant difference. 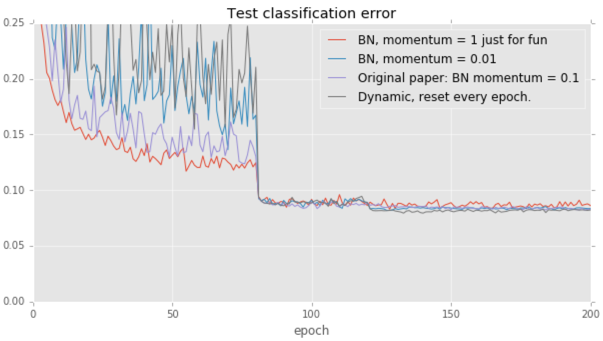 This is a Torch implementation of ["Deep Residual Learning for Image Recognition",Kaiming He, Xiangyu Zhang, Shaoqing Ren, Jian Sun](http://arxiv.org/abs/1512.03385) the winners of the 2015 ILSVRC and COCO challenges.