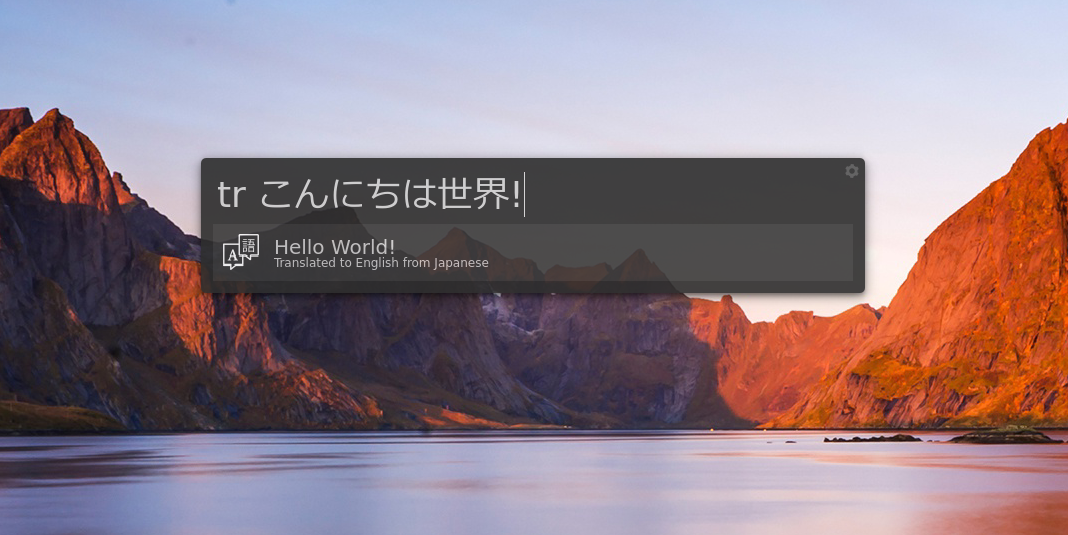 Albert Translate utilises version 3 of the Google Cloud Translate API -- provided by the google-cloud-translate Python package -- which can be installed with Pip before cloning this extension:

You can then install Albert Translate either globally or for only your user:

Once installed, open Albert's config window and enable Translate in the Python section of the Extensions tab.

The above steps will install a white icon by default which should work well with most dark-themed Albert instances. If you're using a theme that shows dark icons better, you can instead install the black icon:

While the v3beta version of Google Cloud's Translation API has a free tier, it requires a Service Account in order to use it. Follow the steps below to create a project and service account for use with Albert Translate:

The trigger for Albert Translate is tr -- the same as the Google Translate extension it replaces. Without changing any of the extension options in your configuration, you can translate any text into English simply by typing tr The text you wish to translate into Albert. The API will automatically detect the source language.

When you've translated some text, there are two actions available. The primary action when you press enter will copy the translated text to your clipboard so that you can paste it into another application.

While this extension can be useful without setting any special options, it can be much more powerful when used with the inline to and from options. The following examples highlight some common scenarios:

There may be times where Google Translate detects the wrong language, particularly if the text you're translating contains more than one language or is similar to another language.

To get around this, you can use from:<language-code> to set your own source language:

Translating Into a Different Language

You can translate text into multiple languages by separating supported language codes with a comma:

Unlike the Google Translate extension included with Albert, the to and from options can be given in any order -- or indeed omitted entirely: 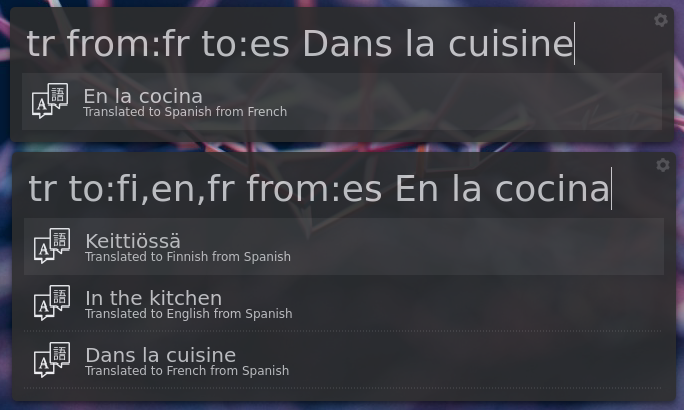 If you commonly translate between two languages, Albert Translate can be configured in such a way that you won't need to pass the to: and from: options every time you translate something.

For example, you may want to translate between English and French. If you set target_lang = en,fr in your config file then -- as long as source_lang is set to auto -- you can translate seamlessly between the two:

When Albert Translate is installed and enabled, it will create its config file in ~/.config/albert/translate.ini.

It will automatically be filled with sensible defaults for the translation options, but you will need to set the required options yourself. Type tr into Albert (followed by a space) to trigger the extension, then press enter to run the default action which is to open the config file in your editor.

The config file is written in an INI format with two sections. For details of each option, see Available Options.

Your Project ID can be obtained from the project's Dashboard on Google Cloud Platform.
Before you use the project for this extension, make sure you have enabled the Cloud Translation API.

If you don't yet have a project, see Authenticating with Google Cloud API for more details.

For information on how to create a Service Account, see Authenticating with Google Cloud API.

The [extension] section contains options used to customise the default behaviour of the extension itself.

This option's value will be used as a fallback when you don't specify from:<lang_code> before the text you want to translate in Albert. If you often translate from different languages, this is best set to auto so that the Translation API can automatically detect the source language.

This is a list of languages to translate into by default when you don't specify to:<lang_code> in the query. Multiple languages can be set by using a comma-separated list such as en,fr,de to translate into more than one language without having to trigger the extension once for each language.

If you have any ideas you'd like to see implemented, feel free to open an issue -- or send a pull request if you know how to code in Python. Hopefully there are no bugs, but if you do manage to find one, run Albert from the command line so you can see any error messages then create an issue. I'll respond as soon as I can, but please provide as much detail as possible so that it's easier to reproduce and fix the bug.

Found this project useful? Please consider donating via Beerpay or Liberapay. All donations are appreciated, no matter how small. If you'd prefer to just say thanks, my GitHub username is also my nick on Freenode.