What it is: a library facilitating complex TUIs on modern terminal emulators, supporting vivid colors, multimedia, threads, and Unicode to the maximum degree possible. Things can be done with Notcurses that simply can't be done with NCURSES. It is furthermore fast as shit. What it is not: a source-compatible X/Open Curses implementation, nor a replacement for NCURSES on existing systems.

for more information, see dankwiki and the man pages. in addition, there is Doxygen output. there is a mailing list which can be reached via [email protected] i wrote a coherent guidebook, which is available for free download (or paperback purchase).

i've not yet added many documented examples, but src/poc/ and src/pocpp/ contain many small C and C++ programs respectively. notcurses-demo covers most of the functionality of Notcurses.

If you're running Notcurses applications in a Docker, please consult "Environment notes" below.

Notcurses abandons the X/Open Curses API bundled as part of the Single UNIX Specification. For some necessary background, consult Thomas E. Dickey's superb and authoritative NCURSES FAQ. As such, Notcurses is not a drop-in Curses replacement.

Wherever possible, Notcurses makes use of the Terminfo library shipped with NCURSES, benefiting greatly from its portability and thoroughness.

Notcurses opens up advanced functionality for the interactive user on workstations, phones, laptops, and tablets, possibly at the expense of e.g. some industrial and retail terminals. Fundamentally, Curses assumes the minimum and allows you (with effort) to step up, whereas Notcurses assumes the maximum and steps down (by itself) when necessary. The latter approach probably breaks on some older hardware, but the former approach results in new software looking like old hardware.

Why use this non-standard library?

Much of the above can be had with NCURSES, but they're not what NCURSES was designed for. On the other hand, if you're targeting industrial or critical applications, or wish to benefit from time-tested reliability and portability, you should by all means use that fine library.

Minimum versions generally indicate the oldest version I've tested with; it may well be possible to use still older versions. Let me know of any successes!

If you wish to use a language other than C to work with Notcurses, numerous wrappers are available. Several are included in this repository, while others are external.

Eight binaries are installed as part of Notcurses:

To run notcurses-demo from a checkout, provide the data directory via the -p argument. Demos requiring data files will otherwise abort. The base delay used in notcurses-demo can be changed with -d, accepting a floating-point multiplier. Values less than 1 will speed up the demo, while values greater than 1 will slow it down.

notcurses-tester likewise requires that data, populated with the necessary data files, be specified with -p. It can be run by itself, or via make test.

With -DUSE_PANDOC=on (the default), a full set of man pages and XHTML will be built from doc/man. The following Markdown documentation is included directly:

If you (understandably) want to avoid the large Pandoc stack, but still enjoy manual page goodness, I publish a tarball with generated man/XHTML along with each release. Download it, and install the contents as you deem fit.

Glyph width, and indeed whether a glyph can be displayed at all, is dependent in part on the font configuration. Ideally, your font configuration has a glyph for every Unicode EGC, and each glyph's width matches up with the C library's wcswidth() result for the EGC. If this is not the case, you'll likely get blanks or � (U+FFFD, REPLACEMENT CHARACTER) for missing characters, and subsequent characters on the line may be misplaced.

It is worth knowing that several terminals draw the block characters directly, rather than loading them from a font. This is generally desirable. Quadrants and sextants are not the place to demonstrate your design virtuosity. To inspect your environment's rendering of drawing characters, run notcurses-info. The desired output ought look something like this: 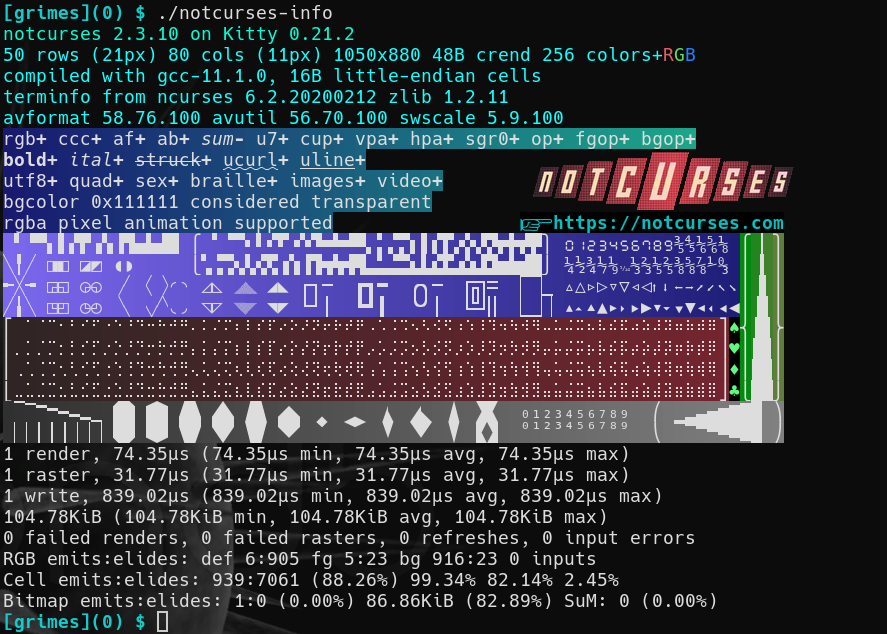 If things break or seem otherwise lackluster, please consult the Environment Notes section! You need to have a correct TERM and LANG definition, and probably want COLORTERM.