View a working demo over on readthedocs.org.

This is a mobile-friendly sphinx theme I made for readthedocs.org.

If you'd like to update the theme, please make your edits to the SASS files here, rather than the .css files on checked into the repo. 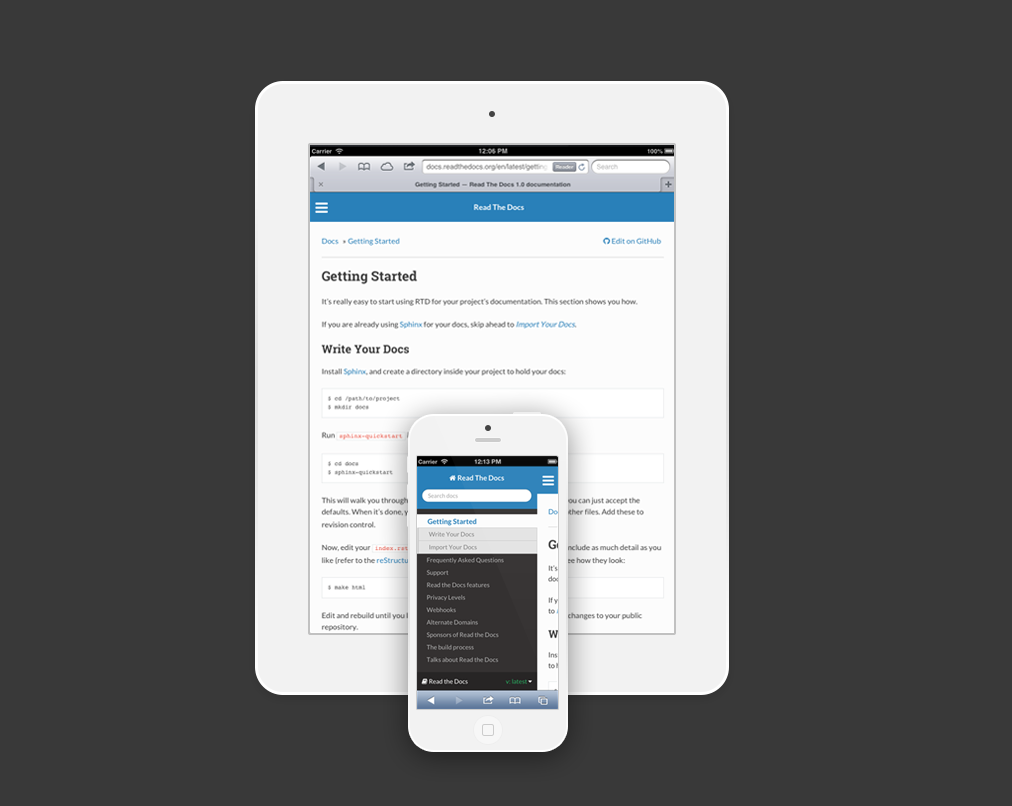 Download the package or add it to your requirements.txt file:

You can configure different parts of the theme.

The theme's project-wide options are defined in the sphinx_rtd_theme/theme.conf file of this repository, and can be defined in your project's conf.py via html_theme_options. For example:

The following options are available:

Pages support metadata that changes how the theme renders. You can currently add the following:

This is a pre-release version

How the Table of Contents builds

Currently the left menu will build based upon any toctree(s) defined in your index.rst file. It outputs 2 levels of depth, which should give your visitors a high level of access to your docs. If no toctrees are set the theme reverts to sphinx's usual local toctree.

It's important to note that if you don't follow the same styling for your rST headers across your documents, the toctree will misbuild, and the resulting menu might not show the correct depth when it renders.

Also note that the table of contents is set with includehidden=true. This allows you to set a hidden toc in your index file with the hidden property that will allow you to build a toc without it rendering in your index.

By default, the navigation will "stick" to the screen as you scroll. However if your toc is vertically too large, it will revert to static positioning. To disable the sticky nav altogether change the setting in conf.py.

Contributing or modifying the theme

The sphinx_rtd_theme is primarily a sass project that requires a few other sass libraries. I'm using bower to manage these dependencies and sass to build the css. The good news is I have a very nice set of grunt operations that will not only load these dependencies, but watch for changes, rebuild the sphinx demo docs and build a distributable version of the theme. The bad news is this means you'll need to set up your environment similar to that of a front-end developer (vs. that of a python developer). That means installing node and ruby.

Set up your environment

Now that our environment is set up, make sure you're in your virtual environment, go to this repository in your terminal and run grunt:

This default task will do the following very cool things that make it worth the trouble:

Before you create an issue

I don't have a lot of time to maintain this project due to other responsibilities. I know there are a lot of Python engineers out there that can't code sass / css and are unable to submit pull requests. That said, submitting random style bugs without at least providing sample documentation that replicates your problem is a good way for me to ignore your request. RST unfortunately can spit out a lot of things in a lot of ways. I don't have time to research your problem for you, but I do have time to fix the actual styling issue if you can replicate the problem for me.

When you release a new version, you should do the following: