It is provided as an open-source BSD-licensed C library. For other programming languages, you can consult a list of known ports on Zstandard homepage.

As a reference, several fast compression algorithms were tested and compared on a Core i7-3930K CPU @ 4.5GHz, using lzbench, an open-source in-memory benchmark by @inikep compiled with GCC 5.4.0, with the Silesia compression corpus.

Zstd can also offer stronger compression ratios at the cost of compression speed. Speed vs Compression trade-off is configurable by small increments. Decompression speed is preserved and remains roughly the same at all settings, a property shared by most LZ compression algorithms, such as zlib or lzma.

The following tests were run on a Core i7-3930K CPU @ 4.5GHz, using lzbench, an open-source in-memory benchmark by @inikep compiled with GCC 5.2.1, on the Silesia compression corpus.

Several algorithms can produce higher compression ratios, but at slower speeds, falling outside of the graph. For a larger picture including very slow modes, click on this link .

The case for Small Data compression

Previous charts provide results applicable to typical file and stream scenarios (several MB). Small data comes with different perspectives. The smaller the amount of data to compress, the more difficult it is to achieve any significant compression.

To solve this situation, Zstd offers a training mode, which can be used to tune the algorithm for a selected type of data, by providing it with a few samples. The result of the training is stored in a file called "dictionary", which can be loaded before compression and decompression. Using this dictionary, the compression ratio achievable on small data improves dramatically: 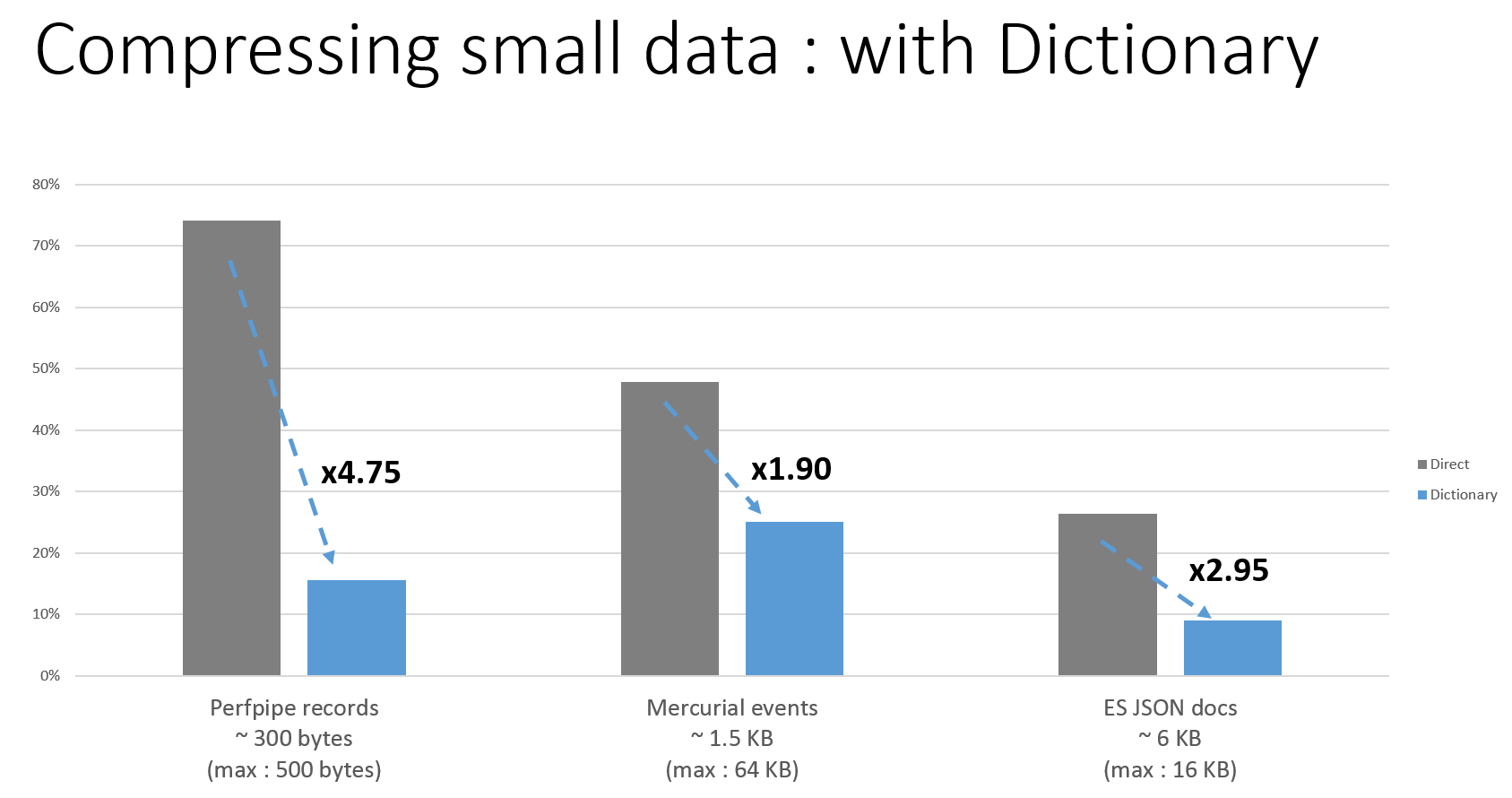 Dictionary works if there is some correlation in a family of small data (there is no universal dictionary). Hence, deploying one dictionary per type of data will provide the greatest benefits. Dictionary gains are mostly effective in the first few KB. Then, the compression algorithm will rely more and more on previously decoded content to compress the rest of the file.

Dictionary compression How To :

Zstandard is currently deployed within Facebook. It is used daily to compress and decompress very large amounts of data in multiple formats and use cases. Zstandard is considered safe for production environments.

Zstandard is BSD-licensed. We also provide an additional patent grant.

The "dev" branch is the one where all contributions will be merged before reaching "master". If you plan to propose a patch, please commit into the "dev" branch or its own feature branch. Direct commit to "master" are not permitted. For more information, please read CONTRIBUTING.