Run one simple command to install and use the interactive project generator. You'll need Node v10 or later.

The interactive CLI will help you create and configure your project automatically.

Since this repo includes the CLI and it's tests, you'll only need to fork or clone this project if you want to contribute. If you find this project useful, please consider leaving a star so others can find it. Thanks!

So we can have nice things:

But first, a good editor

Before you start, consider using an editor with good typescript support.

VS Code (below) is a popular option. Editors with typescript support can provide helpful autocomplete, inline documentation, and code refactoring features.

Also consider installing editor extensions for ESLint and Prettier. These extensions automatically format your code each time you save, and may quickly become invaluable. 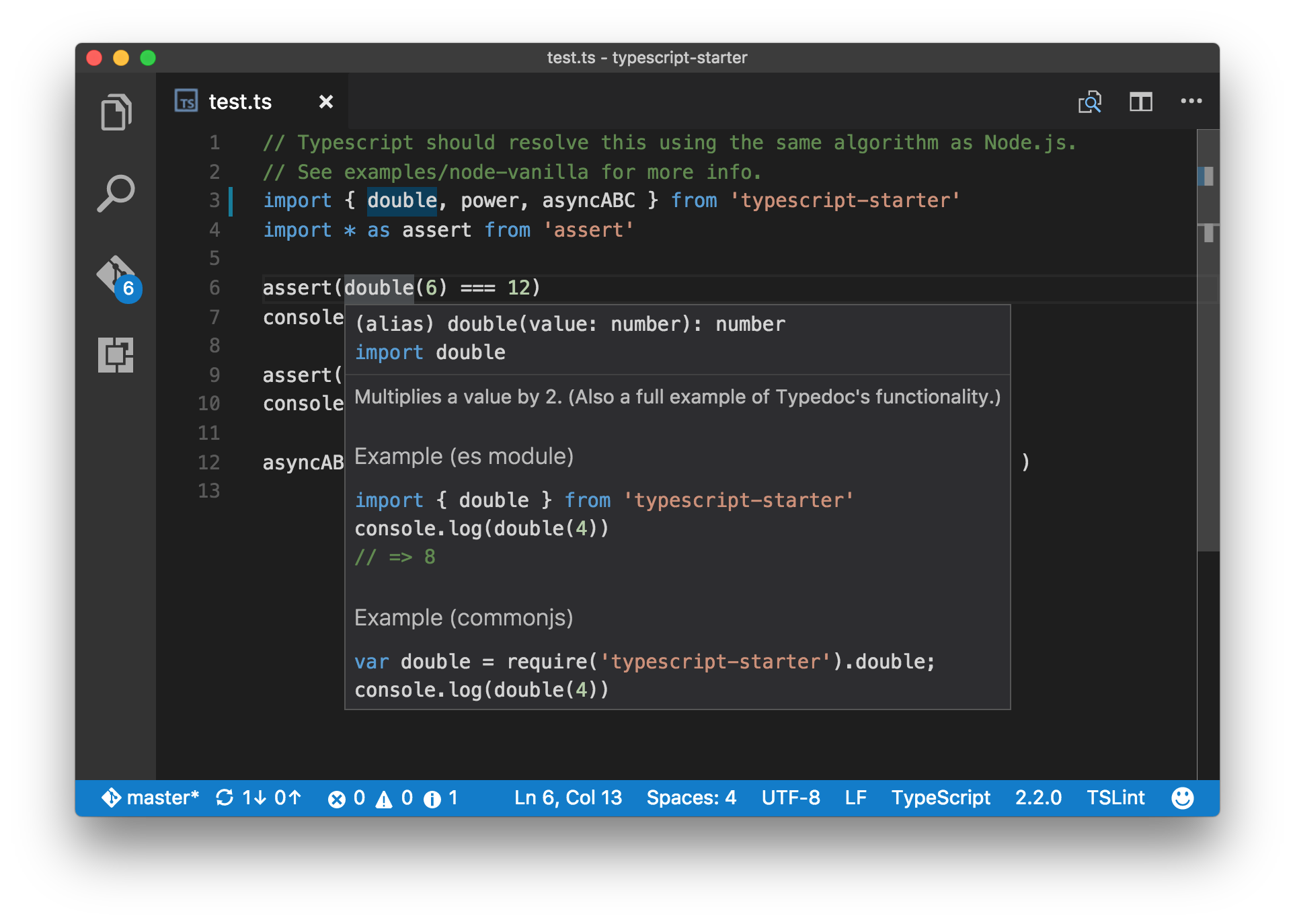 In another terminal tab/window, run the watch:test task:

These watch tasks make development much faster and more interactive. They're particularly helpful for TDD/BDD workflows.

These watch tasks will build and watch the entire project for changes (to both the library source files and test source files). As you develop, you can add tests for new functionality – which will initially fail – before developing the new functionality. Each time you save, any changes will be rebuilt and retested.

Since only changed files are rebuilt and retested, this workflow remains fast even for large projects.

To make getting started easier, the default tsconfig.json is using a very flexible configuration. This will allow you to get started without many warnings from Typescript.

This will create an HTML report of test coverage – source-mapped back to Typescript – and open it in your default browser.

The src folder is analyzed and documentation is automatically generated using TypeDoc.

This command generates API documentation for your library in HTML format and opens it in a browser.

Since types are tracked by Typescript, there's no need to indicate types in JSDoc format. For more information, see the TypeDoc documentation.

To generate and publish your documentation to GitHub Pages use the following command:

Once published, your documentation should be available at the proper GitHub Pages URL for your repo. See typescript-starter's GitHub Pages for an example. 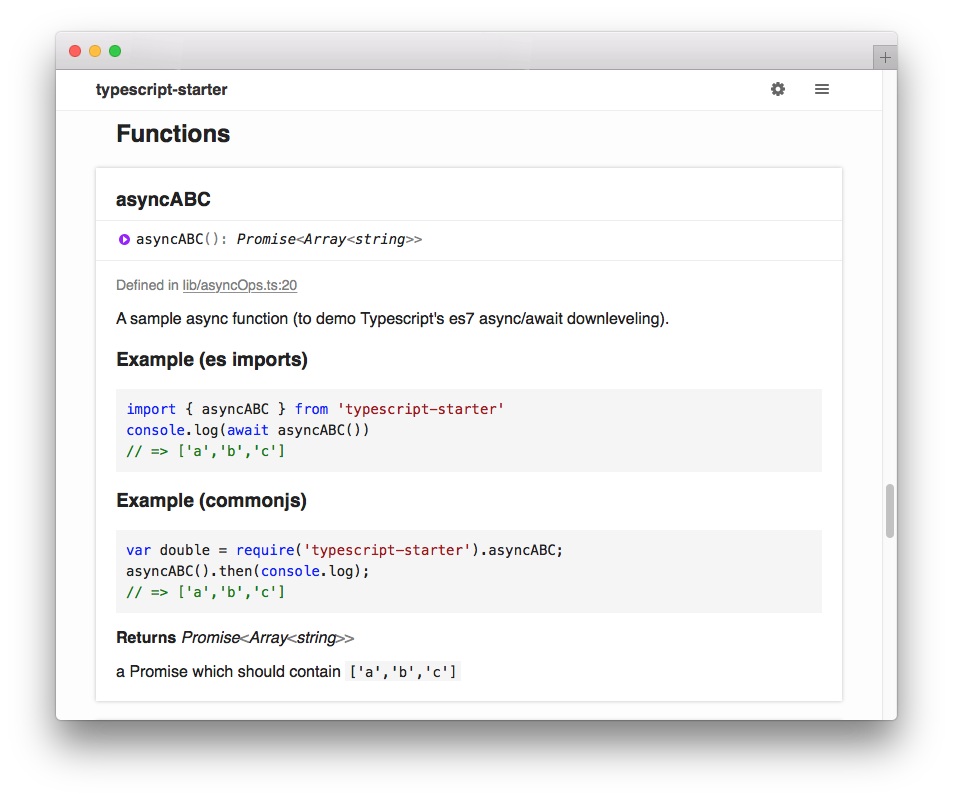 It's recommended that you install commitizen to make commits to your project.

This project is tooled for conventional changelog to make managing releases easier. See the standard-version documentation for more information on the workflow, or CHANGELOG.md for an example.

You may find a tool like wip helpful for managing work in progress before you're ready to create a meaningful commit.

Bringing together many of the steps above, this repo includes a one-step release preparation command.

This command runs the following tasks:

When the script finishes, it will log the final command needed to push the release commit to the repo and publish the package on the npm registry:

Look over the release if you'd like, then execute the command to publish everything.

You can also prepare a non-standard release:

Why are there two builds? (main and module)

The src of typescript-starter is compiled into two separate builds: main and module. The main build is configured to use the CommonJS module system. The module build uses the new es6 module system.

Because Node.js LTS releases do not yet support the es6 module system, some projects which depend on your project will follow the main field in package.json. Tools which support the new system (like Rollup, Webpack, or Parcel) will follow the module field, giving them the ability to statically analyze your project. These tools can tree-shake your module build to import only the code they need.

Why put tests next to the source code?

By convention, sample tests in this project are adjacent to the files they test.

Can I move the tests?

Yes. For some projects, separating tests from the code they test may be desirable. This project is already configured to test any *.spec.ts files located in the src directory, so reorganize your tests however you'd like. You can put them all in a single folder, add tests that test more than one file, or mix and match strategies (e.g. for other types of tests, like integration or e2e tests).

Can I use ts-node for all the things?

Tests are compiled and performed on the final builds in the standard Node.js runtime (rather than an alternative like ts-node) to ensure that they pass in that environment. If you are build a Node.js application, and you are using ts-node in production, you can modify this project to use ts-node rather than a build step.

However, if you're building any kind of library, you should always compile to javascript.

Library authors sometimes make the mistake of distributing their libraries in typescript. Intuitively, this seems like a reasonable course of action, especially if all of your intended consumers will be using typescript as well.

How do I bundle my library for the browser?

The short answer is: don't pre-bundle your library.

Previous versions of typescript-starter included browser bundling using Rollup. This feature has since been removed, since very few libraries should ever be pre-bundled.

If the consumer of your library is using Node.js, bundling is especially unnecessary, since Node.js can reliably resolve dependencies, and bundling may even make debugging more difficult.

If the consumer of your library is a browser application, the application likely has its own build tooling. Very few serious applications are manually bundling their javascript, especially with easy to use, no configuration tools like Parcel available.

Your library is most useful to downstream consumers as a clean, modular codebase, properly exporting features using es6 exports. Consumers can import the exact es6 exports they need from your library, and tree-shake the rest.

How can my library provide different functionality between Node.js and the browser?

In the past, complex javascript libraries have used solutions like Browserify to bundle a version of their application for the browser. Most of these solutions work by allowing library developers to extensively configure and manually override various dependencies with respective browser versions.

For example, where a Node.js application might use Node.js' built-in crypto module, a browser version would need to fall back to a polyfill-like alternative dependency like crypto-browserify.

See hash.ts for a complete example. Two different functions are exported, sha256, and sha256Native. Browser consumers will not be able to import sha256Native, since their bundler will be unable to resolve the built-in Node.js dependency (their bundler will throw an error). Node.js users, however, will be able to import it normally. Each consumer can import the exact functionality they need.

One perceived downside of this solution is that it complicates the library's API. Browser consumers will sometimes import one feature while Node.js users import another. While this argument has merit, we should weigh it against the benefits.

Providing a public API where consumer code is the same between browsers and Node.js is desirable, but it comes at the cost of significant configuration and complexity. In many cases, it requires that code be aware of its environment at runtime, requiring additional complexity and testing.

A better way to provide this developer experience is to provide similar APIs for each environment, and then encourage the use of es6 import aliasing to standardize between them.

For example, in the documentation for typescript-starter, we encourage Node.js users to import sha256Native as sha256. With this convention, we get a standard API without loaders or dependency substitution hacks.

What about Git hooks to validate commit messages?

This project uses standard-version to automatically update the changelog based on commit messages since the last release. To do this, each relevant commit must be properly formatted.

To ensure all commits follow the proper conventions, you can use a package like commitlint with Husky. However, keep in mind that commit hooks can be confusing, especially for new contributors. They also interfere with some development tools and workflows.

If your project is private, or will primarily receive contributions from long-running contributors, this may be a good fit. Otherwise, this setup may raise the barrier to one-off contributions slightly.

Note, as a maintainer, if you manage your project on GitHub or a similar website, you can now use the Squash and Merge option to add a properly formatted, descriptive commit messages when merging each pull request. This is likely to be more valuable than trying to force one-time contributors to adhere to commit conventions, since you can also maintain a more consistent language style. Because this is the best choice for the vast majority of projects, typescript-starter does not bundle any commit message validation.

Quickly create and configure a new library or Node.js project