msbot is a game bot for the MMORPG MapleStory v62. Previous bots only allowed keyboard input to be sent to the foreground window (the window with focus). This bot solves that problem by being able to send keystrokes to the window in the background.

A view of the bot: 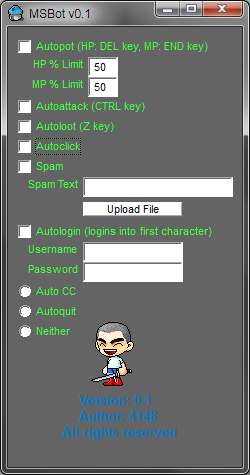 As shown in the image above, the bot supports features that require image recognition, like autologin, autopot, autoCC, etc. This was done by simply capturing the game window into a BMP file and parsing it accordingly. Because of this dependence the result is not guaranteed to work in other versions of the game. Image recognition is done by calculating the squared euclidean distance (SED) using the RGB pixels of the snapshot image and corresponding template. If the SED is below a certain threshold, then it matches the template, and the bot takes an action accordingly.

Keystrokes are sent using the PostMessage Win32 API function. This is what made sending keystrokes to a background process possible.

To use, download the latest release and run the executable. Since the bot uses the resources in the images folder to parse game snapshots, do not modify anything inside that folder.

From there, usage is intuitive: simply check the checkboxes corresponding to the desired functionality.

This bot works on Windows 7 64-bit. It likely works for other versions of Windows.

msbot is distributed under the GNU General Public License.