TL;DR: A shell script to allow you to use Touch ID on a Mac with sudo.

Pro MacBook Pro Tip: have a Touch Bar with Touch ID? If you edit /etc/pam.d/sudo and add the following line to the top…

…you can now use your fingerprint to sudo!

Which is awesome if you have a Mac with Touch ID, or one of the new Magic Keyboard with Touch ID for Mac models with Apple silicon (including the new M1-based iMac).

However what is not awesome is that each update to macOS (as in “11.5.0” and “11.5.1”, etc) will remove this customization (and some others) so I was continually having to re-add it, which meant googling for this tweet, finding the right file, making the change, etc.

Obviously this demands to be automated! So I wrote a shell script.

Look, I'll be honest, it's not the most robust thing in the world. Here's what it does (the script itself is also thoroughly commented).

If you have done some extensive customization of your /etc/pam.d/sudo file, you might want to double-check this doesn't break it.

If you use the default /etc/pam.d/sudo this should work fine (but see disclaimer below).

If you use iTerm2, you should know that one of its defaults is incompatible with this setting.

The setting is called “Allow sessions to survive logging out and back in” and defaults to “Yes” but needs to be set to “No” as shown here: 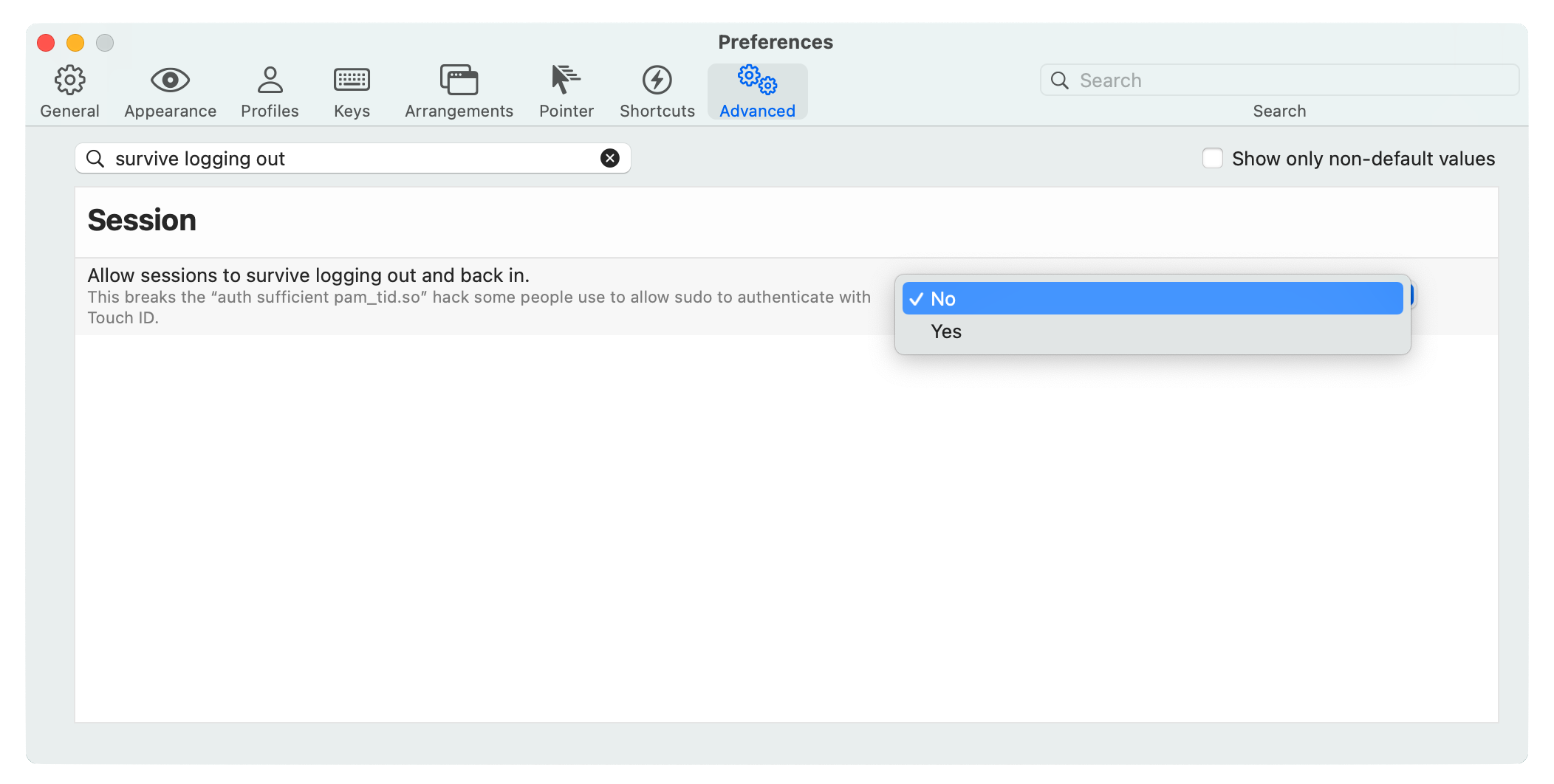 To find this setting, go to iTerm’s Preferences, then click on “Advanced” and scroll down to “Session” or search for “survive logging out” (as I’ve done in the image above).

Note that iTerm's developer even notes in the comment about this setting:

This breaks the “auth sufficient pam_tid.so” hack some people use to allow sudo to authenticate with Touch ID.

I wouldn’t call it a ‘hack’ but you get the gist.

If no, the script will exit.

If yes, the script will check to see if this has been set properly.

It does this by running

and if it gets the answer 0 (zero) then it considers it set properly. If it is unset or otherwise not-zero, then it will tell the user to change it.

This script does not automatically change iTerm’s settings because I consider that up to the user to decide. Plus, if you are using iTerm when you run this script, changing the setting via defafults write might not even work properly. So it's best to change it via the Preferences window, IMO.

How to use this

This works for me and has never deleted my important files or posted illicit pictures to the Internet, but if that happens to you, all you will get from me is an apology. (Plus a “What? How?”)

The short URL for this page is: https://luo.ma/sudo-touch-id.