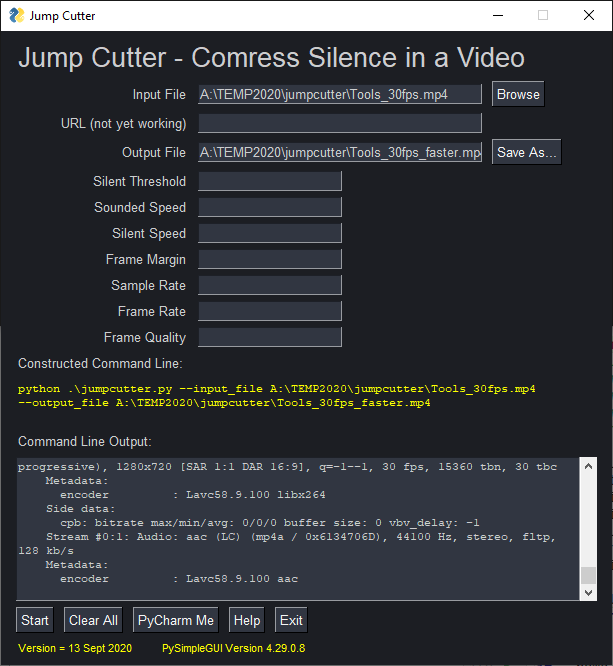 This project is a mashup between jumpcutter, by carykh, and a front-end GUI using PySimpleGUI.

The original jumpcutter.py code has had a single line modification, not because of the GUI, but because of an error that's generated if a sample rate is chosen. This error is likely due to a change in one of the packages being used by jumpcutter. The argparse definition says it's a float, but it should have said int.

Code was changed to:

To start the GUI, run the file jumpcutter_gui.py. This GUI integrates with the jumpcutter.py file by "running" it as if it were a command line program. It's launched as a subprocess with the parameters collected using the GUI being passed as arguments to the program.

When GUI is initially started it looks like this, with default parameters filled in. These are the same defaults as the jumpcutter.py file has specified, so it's safe for you to clear them all if you don't need to change any of them. A handy "Clear All" button is provided to do this. 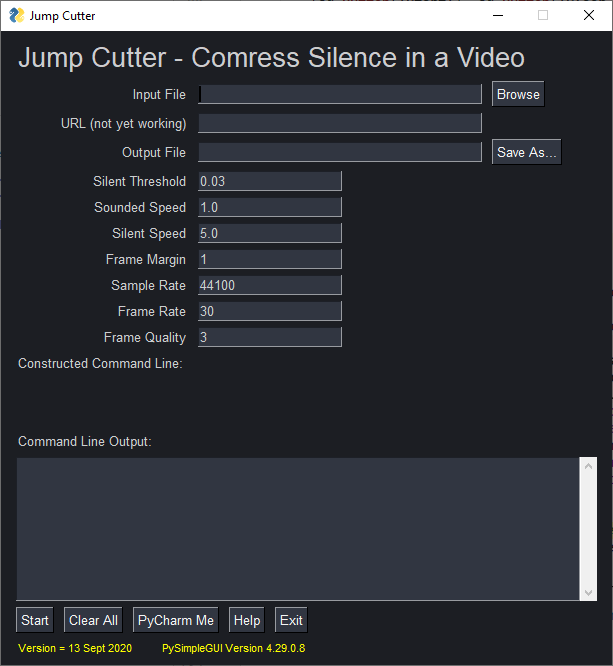 If you want to be able to launch PyCharm to edit the code using the "PyCharm Me" button, you will need to change the PYCHARM constant located at the top of the program. It's currently set to:

If you locate your PyCharm folder, you should be able to locate the batch file in the bin folder. If it's not an important feature to you, simply delete the button.

There is currently one limitation...

OK, so the reason this tool has a GUI added is that it's a miraculous tool in my opinion. At least it was for my videos. They all feel "tighter" to me. The time I spend fumbling around typing, trying not to make mistakes, all the while not talking adds up to about 18% - 20% of my videos. That's the amount of time, on average, each video was compressed. Over the whole series, that's quite a bit of time. Not only do they sound better, but viewers actually save real time viewing them. It's a win win.

Hopefully your videos will get the same kind of benefits mine did.

Side By Side Examples

I am so enamored by this tool that I processed my entire 18 part series of PySimpleGUI lessons.

Here is the original playlist:

And here is a new playlist with all of the videos modified:

I don't have a total amount of time saved, but I can tell you that each video is 17-20% shorter. That's quite a bit of a difference! Not only are they shorter, but they "feel tighter". I appear to have my act together when in fact I'm fumbling around trying to type with as few errors as possible, with the keyboard being obscured by my microphone.

I'm going to make an experimental "typical how-to video" to show the potential power of this tool. The idea is to be as fumbling and lost as possible and see if the tool will correct things to be much more direct and to the point.

If you're a video creator, it's really easy to use this tool. YouTube provides you a link to download your video. You can then run the video through this tool, using the GUI, and upload the new video as a new YouTube video.

If you have good results using the tool, I would love to hear from you. Please open an Issue on this GitHub and post somelinks. This will give visiblity to other users of your results.

The remainder of the readme is from Cary's original repo:

This program relies heavily on ffmpeg. It will start subprocesses that call ffmpeg, so be aware of that!

As the program runs, it saves every frame of the video as an image file in a temporary folder. If your video is long, this could take a LOT of space. I have processed 17-minute videos completely fine, but be wary if you're gonna go longer.

I want to use pyinstaller to turn this into an executable, so non-techy people can use it EVEN IF they don't have Python and all those libraries. Jabrils recommended this to me. However, my pyinstaller build did not work. :( HELP

nix-build to get a script with all the libraries and ffmpeg, nix-build -A bundle to get a single binary.