MacDown is an open source Markdown editor for OS X, released under the MIT License. The author stole the idea from Chen Luo’s Mou so that people can make crappy clones.

Visit the project site for more information, or download MacDown.app.zip directly from the latest releases page.

Download, unzip, and drag the app to Applications folder. MacDown is also available through Homebrew Cask: 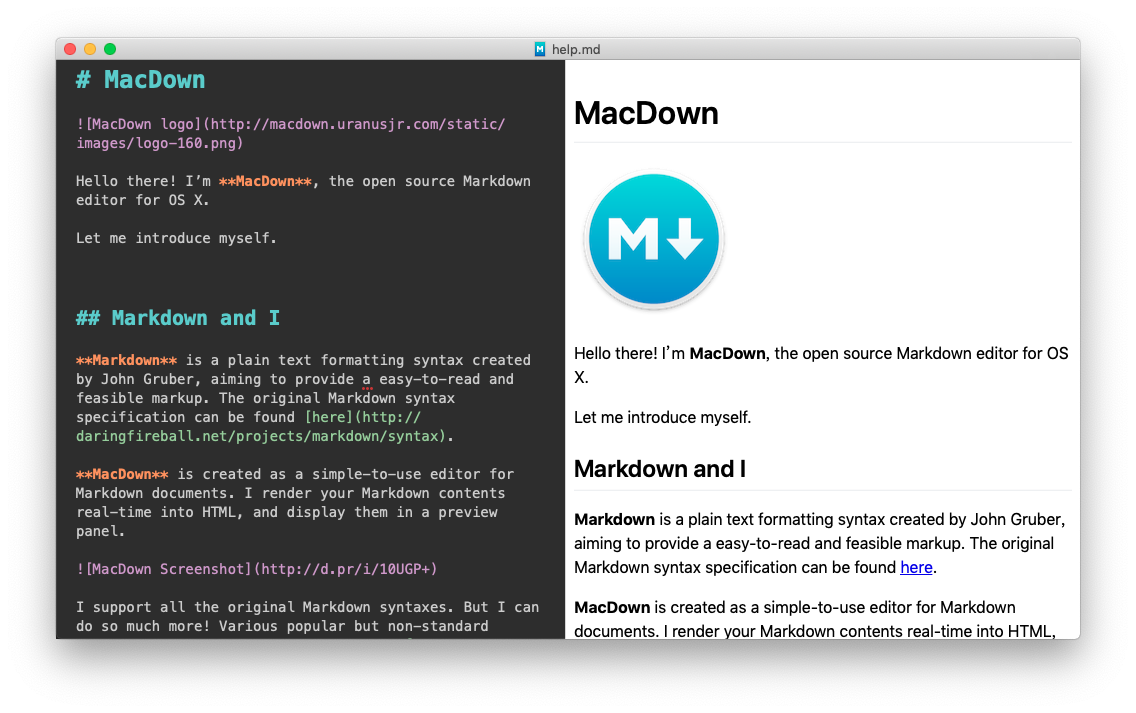 MacDown is released under the terms of MIT License. You may find the content of the license here, or inside the LICENSE directory.

You may find full text of licenses about third-party components in the LICENSE directory, or the About MacDown panel in the application.

The following editor themes and CSS files are extracted from Mou, courtesy of Chen Luo:

If you wish to build MacDown yourself, you will need the following components/tools:

Note: Old versions of CocoaPods are not supported. Please use Bundler to execute CocoaPods, or make sure your CocoaPods is later than shown in Gemfile.lock.

Note: The Command Line Tools (CLT) should be unnecessary. If you failed to compile without it, please install CLT with

An appropriate SDK should be bundled with Xcode 5 or later versions.

and open MacDown.xcworkspace in Xcode. The first command initialises the dependency submodule(s) used in MacDown; the second one installs dependencies managed by CocoaPods.

Refer to the official guides of Git and CocoaPods if you need more instructions. If you run into build issues later on, try running the following commands to update dependencies:

Join our Gitter channel if you have any problems with MacDown. Any suggestions are welcomed, too!

You can also file an issue directly on GitHub if you prefer so. But please, search first to make sure no-one has reported the same issue already before opening one yourself. MacDown does not update in your computer immediately when we make changes, so something you experienced might be known, or even fixed in the development version.

MacDown depends a lot on other open source projects, such as Hoedown for Markdown-to-HTML rendering, Prism for syntax highlighting (in code blocks), and PEG Markdown Highlight for editor highlighting. If you find problems when using those particular features, you can also consider reporting them directly to upstream projects as well as to MacDown’s issue tracker. I will do what I can if you report it here, but sometimes it can be more beneficial to interact with them directly.

If you find MacDown suitable for your needs, please consider giving me a tip through PayPal. Or, if you prefer to buy me a drink personally instead, just send me a tweet when you visit Taipei, Taiwan, where I live. I look forward to meeting you!