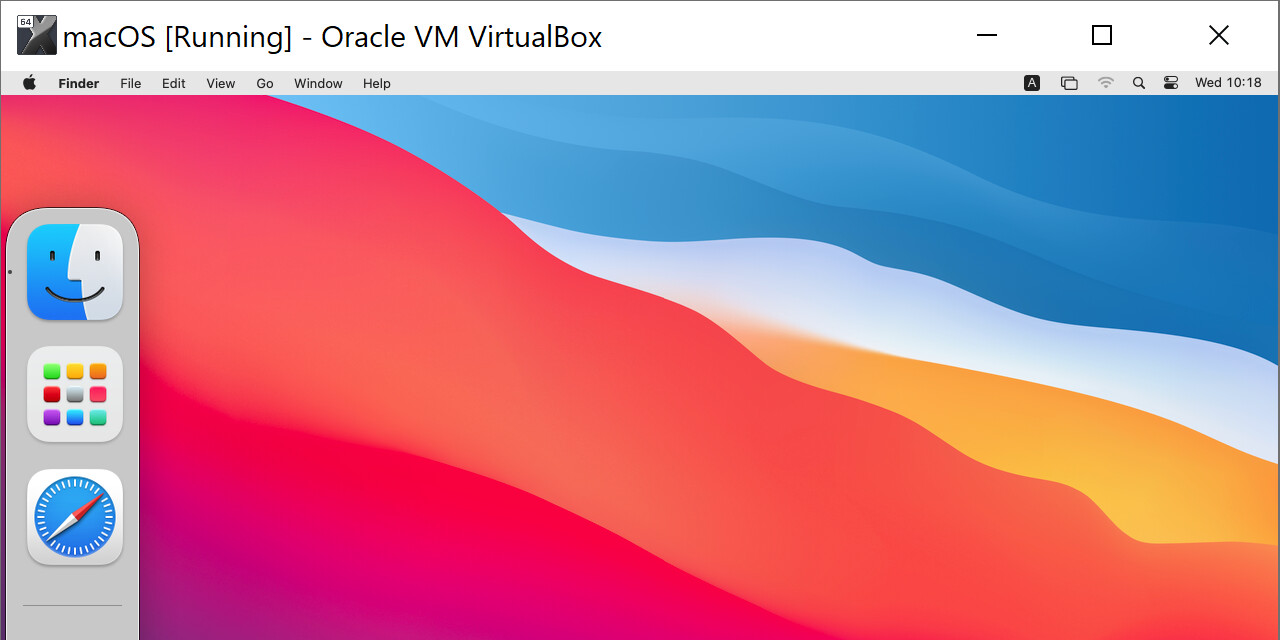 Push-button installer of macOS on VirtualBox

A default install only requires the user to sit patiently and, less than ten times, press enter when prompted by the script, without interacting with the virtual machine.

Tested on bash and zsh on Cygwin. Works on macOS, CentOS 7, and Windows. Should work on most modern Linux distros.

Documentation can be viewed by executing the command ./macos-guest-virtualbox.sh documentation

The majority of the script is either documentation, comments, or actionable error messages, which should make the script straightforward to inspect and understand.

iCloud and iMessage connectivity and NVRAM

iCloud, iMessage, and other connected Apple services require a valid device name and serial number, board ID and serial number, and other genuine (or genuine-like) Apple parameters. These can be set in EFI and NVRAM by editing the script. See the documentation command for further information.

The script by default assigns a target virtual disk storage size of 80GB, which is populated to about 25GB on the host on initial installation. After the installation is complete, the storage size may be increased. See the documentation command for further information.

Developing and maintaining VirtualBox or macOS features is beyond the scope of this script. Some features may behave unexpectedly, such as USB device support, audio support, FileVault boot password prompt support, and other features.

macOS guests on VirtualBox are incompatible with some CPU models. If the guest macOS boot process hangs on “LoadKernelFromStream”, “EndRandomSeed”, or "EXITBS", see the documentation command regarding VirtualBox CPU profiles and CPUID settings. Some CPU models released in 2020 and later may fail to start or complete the installer, and may require manually adjusting the CPUID settings.

After successfully creating a working macOS virtual machine, consider importing it into more performant virtualization software, or packaging it for configuration management platforms for automated deployment. These virtualization and deployment applications require additional configuration that is beyond the scope of the script.

QEMU with KVM is capable of providing virtual machine hardware passthrough for near-native performance. QEMU supports the VMDK virtual disk image storage format, which can be configured to be created by the script. See the documentation command for further information. QEMU and KVM require additional configuration that is beyond the scope of the script.

The VirtualBox Native Execution Manager (NEM) is an experimental VirtualBox feature. VirtualBox uses NEM when access to VT-x and AMD-V is blocked by virtualization software or execution protection features such as Hyper-V, WSL2, WSLg, Windows Sandbox, memory integrity protection, Application Guard, Credential Guard, Device Guard, and other features and software. macOS and the macOS installer have memory corruption issues under NEM virtualization. The script checks for NEM and exits with an error message if it is detected.

VirtualBox can run on WSL2 and WSLg with some kernel module compilation, though performance is extremely low. At the point that kernel module compilation is required, it's preferable to use QEMU/KVM. QEMU/KVM on WSL2 and WSLg is orders of magnitude faster than VirtualBox. WSL2, WSLg, QEMU, and KVM require additional configuration that is beyond the scope of the script.

The macOS VirtualBox guest is loaded without extra bootloaders, but it is compatible with OpenCore. OpenCore requires additional configuration that is beyond the scope of the script.

macOS may not support any built-in VirtualBox audio controllers. The bootloader OpenCore may be able to load open-source or built-in audio drivers in VirtualBox, providing the configuration for STAC9221 (Intel HD Audio) or SigmaTel STAC9700,83,84 (ICH AC97) is available.

VirtualBox does not supply an EDID for its virtual display, and macOS does not enable display scaling (high PPI) without an EDID. The bootloader OpenCore can inject an EDID which enables display scaling.

The VirtualBox EFI implementation does not properly load the FileVault full disk encryption password prompt upon boot. The bootloader OpenCore is able to load the password prompt with the parameter ProvideConsoleGop set to true. See sample config.plist