Features at a glance

The aim of the EU FP7 research project SPENCER was to develop algorithms for service robots that can guide groups of people through highly dynamic and crowded pedestrian environments, such as airports or shopping malls, while behaving in a socially compliant manner by e.g. not crossing in between families or couples. Exemplary situations that such a robot could encounter are visualized in below image on the right. To this end, robust and computationally efficient components for the perception of humans in the robot's surroundings needed to be developed. 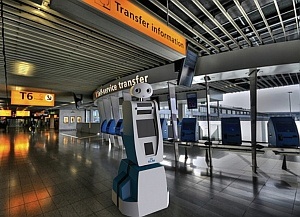 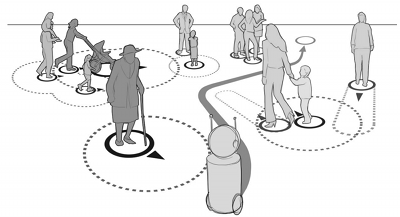 The following figure shows the real-time people and group detection and tracking pipeline developed in the context of the SPENCER project:

The entire communication between different stages of our pipeline occurs via ROS messages which encourage reuse of our components in custom setups. The modular architecture allows for easy interchangeability of individual components in all stages of the pipeline.

We provide a set of reusable ROS message type definitions, which we have successfully applied across various people detection and tracking scenarios, over different sensor modalities and tracking approaches. Most relevant messages can be found inside the spencer_tracking_msgs package.

We highly encourage reuse of these messages to benefit from our rich infrastructure of detection, tracking, filtering and visualization components! Existing detection and tracking algorithms can often easily be integrated by publishing additional messages in our format, or by writing a simple C++ or Python node that converts between message formats.

We have integrated the following person detection modules:

Further external detectors which output geometry_msgs/PoseArray or people_msgs/PositionMeasurementArray messages can easily be integrated into our framework using the scripts from this package. Examples of such detectors include:

For detection-to-detection fusion, we have implemented a series of nodelets which can be used to flexibly compose a fusion pipeline by means of roslaunch XML files. Details can be found in the spencer_detected_person_association package. The following figure shows an example configuration which was used during experiments in SPENCER: 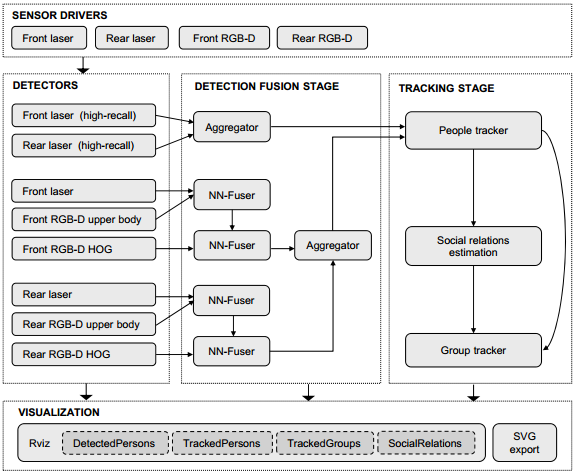 For person and group tracking, we currently provide exemplary code based upon a nearest-neighbor standard filter data association, which is robust enough in most use cases (especially if multi-modal detectors are being used). The people tracker has been enhanced with a track initiation logic and 4 different IMM-based motion models (constant velocity with low process noise, high process noise, coordinated turn and Brownian motion) to make tracking more robust.

The group tracker relies on social/spatial relations determined via the same coherent motion indicator features as described in [1].

Internally, we have already integrated more advanced methods, including a track-oriented multi-hypothesis person tracker [2], and a hypothesis-oriented multi-model multi-hypothesis person and group tracker [1]. These components use exactly the same ROS message definitions, however, they are not yet publicly available. The components available here were originally implemented as baseline methods for comparison.

The spencer_tracking_utils package contains a number of standalone ROS nodes that can filter an incoming set of TrackedPerson messages based upon different criteria, e.g. distance to the sensor/robot, visually confirmed tracks only, etc.

In spencer_tracking_metrics, we have wrapped publicly available implementations of different tracking metrics, such as CLEAR-MOT and OSPA, such that they are compatible with our message definitions. These are useful for evaluating tracking performance for a given groundtruth.

The srl_tracking_logfile_import package provides a Python script for importing old 2D laserscan logfiles in CARMEN format that have been annotated with groundtruth person tracks, such as these datasets.

The srl_tracking_exporter package contains a useful Python script for rendering track trajectories, detections and robot odometry from a 2D top-down perspective as scalable vector graphics (SVGs). These can optionally be animated to visualize the evolution of one or multiple tracks over time.

One major highlight of our framework is a reusable and highly configurable set of custom RViz plugins for the visualization of:

As an example, some features of the tracked persons display are:

All of the following screenshots have been generated using these plugins.

Example screenshots of our system in action

The following screenshots show our system in action, while playing back recorded data from a crowded airport environment:

Group tracking via coherent motion indicator features, as described in [1]

Videos of the people detection and tracking system in action can be found on the SPENCER YouTube Channel:

On the SPENCER robot platform, which is equipped with front and rear RGB-D sensors (Asus Xtion Pro Live) and two SICK LMS500 laser scanners, we distributed the people and group detection & tracking system over two high-end gaming laptops (Intel Core i7-4700MQ, nVidia GeForce 765M). The detectors for the frontal sensors were executed on one laptop along with the detection-fusion pipeline. The detectors for the rear-facing sensors and the people and group tracking modules were executed on the second laptop. Both laptops were connected with each other and the rest of the platform via gigabit ethernet.

With this configuration, the components run in real-time at 20-25 Hz (with visualization off-loaded to a separate computer), even in crowded environments where more than 30 persons are concurrently visible.

A packaged version of the entire framework for ROS Kinetic on Ubuntu 16.04 (Xenial) is kindly provided by the Lincoln Research Centre for Autonomous Systems (L-CAS) and built by their continuous integration system. You must first add their package repository to your apt/sources.list as described here. Then, install the framework via

Note that the groundHOG detector in the packaged version is non-functional.

The people and group detection and tracking framework has been tested on Ubuntu 14.04 / ROS Indigo and Ubuntu 16.04 / ROS Kinetic. For more information on the Robot Operating System (ROS), please refer to ros.org.

As we currently do not yet provide any pre-built Debian packages, you have to build our framework from source code. As a first step, create a folder for a new catkin workspace and clone the GitHub repository into the src subfolder:

Assuming you have ROS Indigo or ROS Kinetic already installed, we recommend installing the required depencencies of our framework via:

Next, we suggest to use catkin (available via sudo apt-get install python-catkin-tools) to setup the workspace:

Finally, build all packages via:

After building the workspace, source it via:

Special note on CUDA SDK for the groundHOG detector

The cudaHOG library used by rwth_ground_hog requires an nVidia graphics card and an installed CUDA SDK (recommended version: 6.5). As installing CUDA (especially on laptops with Optimus/Bumblebee) and compiling the library is not straightforward, detailled installation instructions are provided here. Once these instructions have been followed, the rwth_ground_hog package needs to be rebuilt using catkin. If no CUDA SDK is installed, the ROS package will still compile, but it will not provide any functionality.

The following demo and three tutorials help you to easily get started using our framework.

Demo: Multimodal tracking in RGB-D and 2D laser from a bagfile

Then, you can launch

which will start playing back a bagfile (as soon as you unpause by pressing SPACE) and run Rviz for visualization.

Using the PCL people detector instead of the upper-body detector

As an alternative to the depth template-based upper-body detector, you can choose to use our slightly modified version of the person detector from the Point Cloud Library. This detector first performs a Euclidean clustering and head subcluster extraction, before validating the candidate ROIs using a HOG SVM. To do so, pass use_pcl_detector:=true to the launch file.

If you have compiled the cudaHOG library (see description further above), you can optionally enable the groundHOG detector by passing use_hog_detector:=true to the launch file. The detection-to-detection fusion pipeline will then automatically fuse the detections from both detectors.

This is the easiest way to get started using just a single RGB-D sensor connected locally to your computer. Place your Asus Xtion Pro Live sensor horizontally on a flat surface, and connect it to your computer (or play the example bagfile linked in a section further below). Then run the following launch file from your people tracking workspace (make sure that you have sourced it, e.g. source devel/setup.bash):

This will do the following:

The original MS Kinect v1 sensor does not support OpenNi2. In this case, append use_openni1:=true to the above command-line of the launch file to fall back to OpenNi1.

If you cannot see any detection bounding boxes, first check if the point cloud is displayed properly in RViz. If not, there is probably a problem with your RGB-D sensor (USB or OpenNi issues).

To try out a sensor configuration similar to the SPENCER robot platform, run:

This assumes the RGB-D sensors mounted horizontally at about 1.6m above ground, and sensor data to be published on the following topics:

The launch file starts a pipeline similar to that from tutorial 1 (above), but includes a second set of RGB-D detectors for the rear sensor, as well as person detectors for the two 2D laser scanners. Sensor drivers which publish the RGB-D and laser data listed above are not started automatically by this launch file. Also, you manually have to start Rviz.

Using a subset of these sensors

Note that the fusion pipeline reconfigures automatically if only a subset of the person detectors is running. If e.g. you don't have a rear RGB-D sensor, just comment out the line which includes rear_rgbd_detectors.launch in tracking_on_robot.launch.

The multi-modal "Motion Capture" sequence from our ICRA 2016 paper is available upon request to let you evaluate your own detection / tracking algorithms on our dataset. For a fair comparison, please use the CLEAR-MOT metrics implementation contained in this repository, if possible. The raw data from the airport sequence cannot be shared for privacy reasons, though we might provide the extracted detections at a later point.

Credits, license & how to cite

The software in this repository is maintained by:

Credits of the different ROS packages go to the particular authors listed in the respective README.md and package.xml files. See also the AUTHORS.md file for a list of further contributors.

This work has been supported by the European Commission under contract number FP7-ICT-600877 (SPENCER), and has received additional funding from the European Union's Horizon 2020 research and innovation programme under grant agreement No 732737 (ILIAD).

If you use the software contained in this repository for your research, please cite the following publication:

Most of the software in this repository is released under a BSD license. For details, however, please check the individual ROS packages.

[2] Jafari O. Hosseini and Mitzel D. and Leibe B.. Real-Time RGB-D based People Detection and Tracking for Mobile Robots and Head-Worn Cameras. IEEE International Conference on Robotics and Automation (ICRA'14), 2014.

Multi-modal ROS-based people detection and tracking framework for mobile robots developed within the context of the EU FP7 project SPENCER.