This is a demonstration of deploying a complete jenkins master + build agent environment to AWS EC2 which is pre-configured to build the LSST Stack. The principle goal is to demonstrate a possible migration path away from LSST DM's existing CI infrastructure. The key feature improvements over the existing buildbot driven system are:

A secondary objective is provide an example of deploying a moderately complex application onto a modern cloud infrastructure. 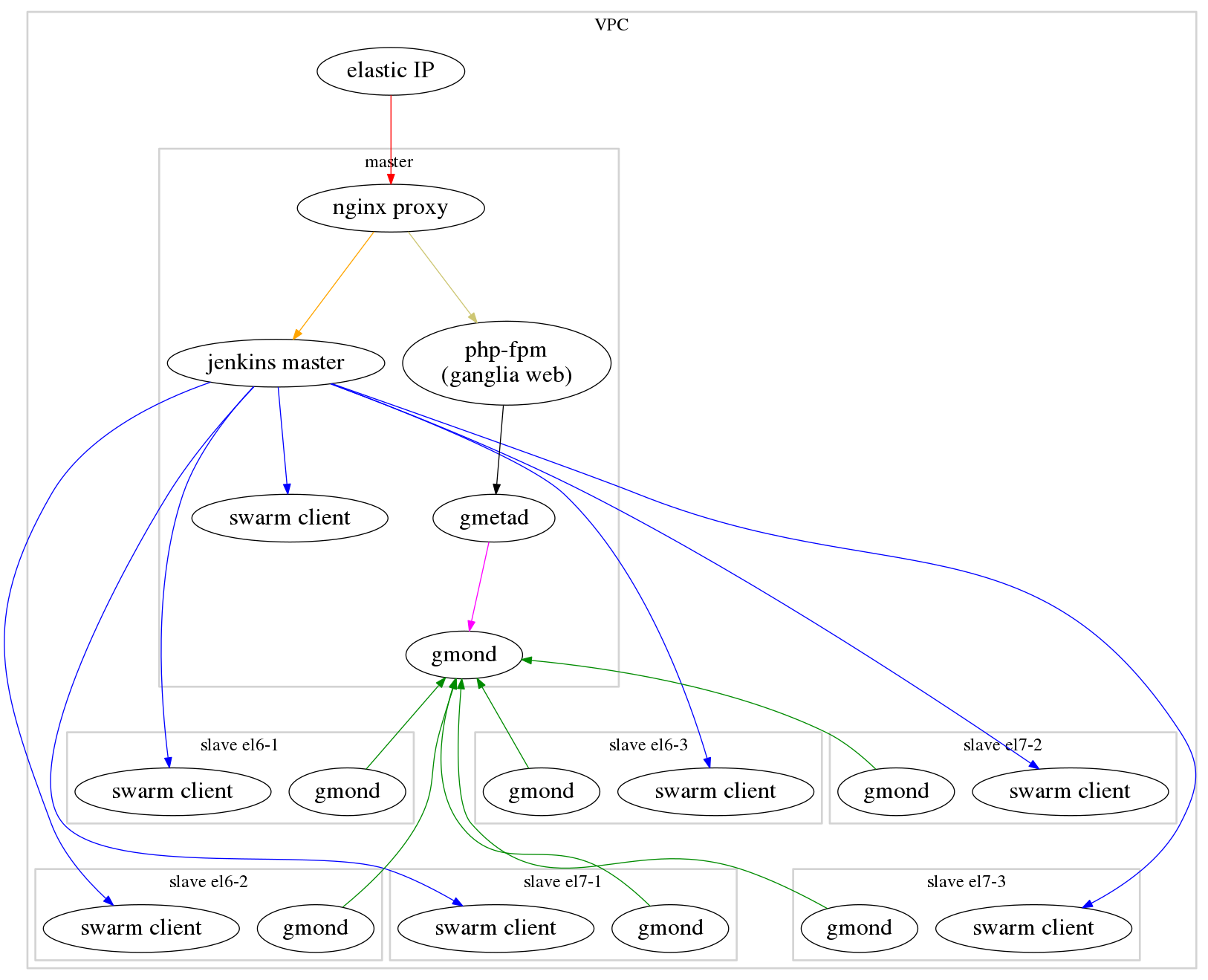 The instances running the jenkins master and agent processes are deployed into an AWS "Virtual Private Cloud" or VPC. Using a non-default VPC (historically, AWS had separate classic and VPC environments; all newly created AWS accounts have a default VPC in each region that more or less emulates the "classic" behavior) allows for direct control over the RFC1918 private address space. A benefit of this is that the master instance can have a fixed IP address which the agents can locate by convention instead of requiring either the address to be injected or use of a service discovery mechanism.

The Centos project supplies "official" x86_64 HVM Amazon Machine Images (AMIs) for both Centos 6 and 7 in all EC2 regions. However, the images are slightly out of date, 6.5 vs. 6.7 and 7.0 vs. 7.1, and the Centos 6 image does not include cloud-init or is it compatible with vagrant. The popular chef/bento packer templates were modified to install/configure cloud-init for Centos 6, update the images to the current minor releases, and make both images more friendly for usage with vagrant.

As with any network environment, a VPC requires a fair amount of configuration. Instead of requiring manual interaction via the AWS console, terraform is used to configure fully configure the VPC. Note that terraform has the capability to spawn EC2 instances and could completely replace vagrant at the expense of loosing a convenient development/debugging mechanism.

The terraform configuration files are under the 'tf' directory.

EC2 instances are created/destroyed via vagrant. Vagrant is also used to pass "User Data" to cloud-init and to run puppet on each node in "masterless" mode.

Vagrant is configured via the 'Vagrantfile'.

There are a number of low-level configurations needed in a cloud environment. Including:

cloud-init is relied upon to provide those functions in demo.

The bulk of the "heavy lifting" (configuring the instances) in this demo is done by a composition of puppet modules. This is implemented via a bundled "site" module that implements the Roles and Profiles pattern.

A full production deployment would likely involve additional jenkins plugins for metric collection and instance level metrics collected external to jenkins which are then made available to end users via a web interface.

The ganglia monitoring system is used to collect general host metrics from the build agents and are accessible from the web interface as https://<jenkins-master>/ganglia/.

A possible improvement would be to create gmetric values from jenkins when certain events occur, such as the start and finish of jobs.

The demo enables cloud watch metric collection about the instances which is completely external to jenkins and not visible without AWS account credentials.

A simple backup solution is provided via a jenkins job named jenkins-ec2-snapshot that will create EBS snapshots of the jenkins-master using the ec-snapshot script.

Note that this requires valid AWS credientials to be present in common.yaml.

jenkins does not have any access control enabled. This means that anyone can change anything, include the jenkins configuration, essentially allowing arbitrary code to be executed under the jenkins role account.

There is on going development to improve the rtyle/jenkins puppet module so that is can handle the complete set of security configuration needed for a production deployment without requiring manual configuration by the administrator.

The demo attaches an elastic IP address (public IP) but does not manage DNS configuration for this address. There are a number of ways of automatically handling this including via the terraform AWS provider.

There are a number of plugins that are not configured via this demo as it would require exposing secrets. This includes github oauth integration and email notifications.

Select Official Centos AMI to use as base image

EC2 AMI IDs are per region so you need to select the correct AMI ID for the region in which you plan to build. Note that it is possible to copy AMIs between EC2 regions after they are built. However, each region will still have a unique AMI ID

To be used by vagrant.

This demo uses a simple hiera configuration for providing configuration data to the puppet manifests used to provision the nodes. The literal configuration file used by hiera/puppet, if present, is hieradata/common.yaml.

However, some configuration data, such as the hipchat API token, must be kept confidential. A rubygem named hiera-eyaml is used to maintain a "shadow" hiera configuration hieradata/common.eyaml that contains mixed plaintext and encrypted values. Confidential data that is specific to LSST/DM is present in this file and the correct private key ring needs to be present under the ./keys/ directory in order to decrypt it.

If you do not have access to LSST/DM keys, you can either copy common.yaml to common.eyaml and manually edit it or generate a new eyaml key set to maintain your own version of common.eyaml (the LSST/DM encrypted values would need to be removed).

It is essential that the eyaml keys are kept confidential and not published in this repository.

A Gemfile is provided to install hiera-eyaml. A working ruby + bundler install is assumed.

The ssh key pair is required for both terraform and vagrant.

One of the vagrant plugins currently in use is not compatible with vagrant parallel providers. That means vagrant is unable to create EC2 instances in parallel.

Start up the build agents first so there isn't state created by the master attempting to create jobs.

The shell snippet below will store all of the important environment variables that have been set into a script called creds.sh, intended to be sourced before performing vagrant/terraform operations in a clean shell.