This project aims to bring back a productive working environment on Windows 11. 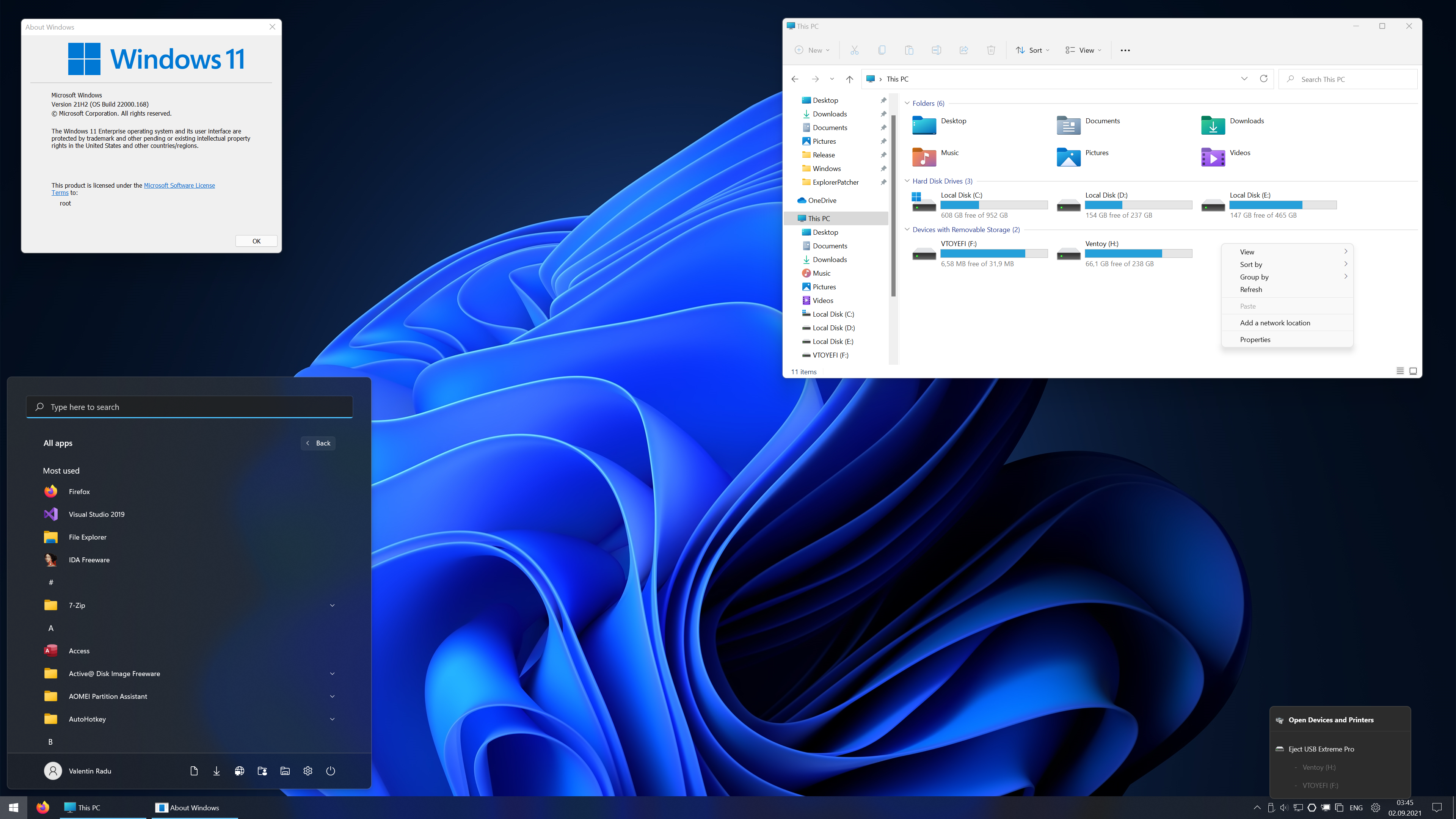 The functionality of this software includes:

In the Releases section, you will find a download for a DLL called dxgi.dll. It has been tested on the latest stable build of Windows 11 (22000.258), but it may work just fine on newer builds too. This is the runtime part of the application. You need to place this DLL in the following location: C:\Windows.

After you have completed the above setup, make sure you have an active Internet connection and restart the Explorer process using Task Manager or by issuing the following command: taskkill /f /im explorer.exe. Once File Explorer restarts, some necessary files (symbol files) will be downloaded from Microsoft (around 50MB). This should be relatively quick, depending on your Internet connection speed. When this is done, File Explorer will restart again and will be ready for use. Notifications should show up informing you about the progress, and you can also use Task Manager to watch for network activity. This process only happens when a new Windows 11 build is installed on the machine.

Now, the classic taskbar should be enabled. Still, there is some more setup to do, depending on your preferences.

To configure the most common options, the application now comes with a configuration user interface. To open it, right click the Start button (or press Win+X) and choose "Properties".

All of the options described above, and more, can be configured using the GUI. Below is a screenshot of the main page ("Taskbar") of the configuration interface. 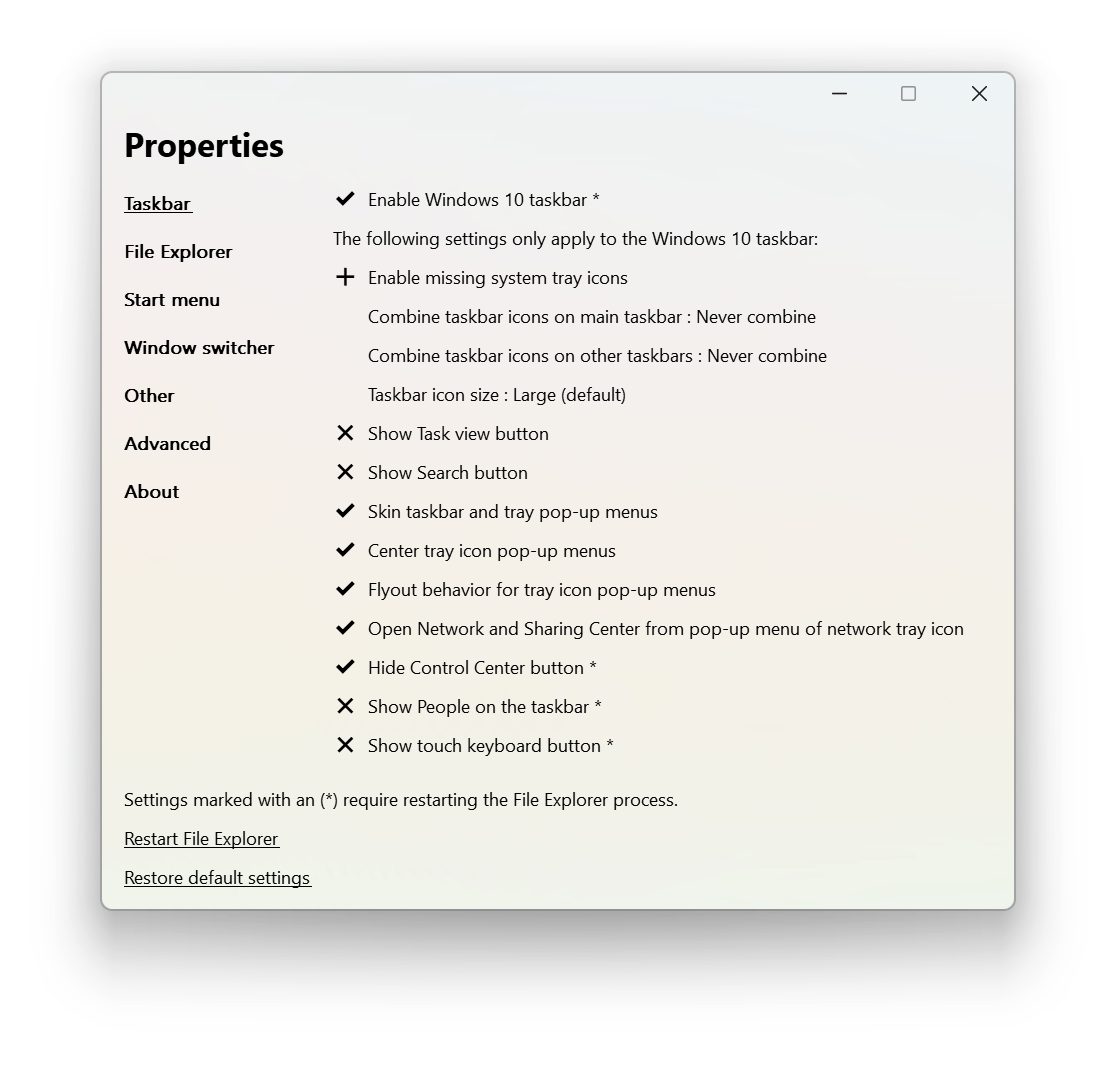 The icon near an option signifies its current state:

Here is a list of things you may want to try to fix/enhance a few of the aspects which are not addressed by this patcher directly:

As you will notice, the battery flyout in the taskbar is broken in Windows 11. You can replace it with a much better alternative called Battery Mode which has all the stock options and more.

To disable the blue highlight in the context menu and return to the classic gray highlight from early Windows 11 builds, read here.

If you want the same behavior as the default one in Windows 11, which is to have the icons centered along with the Start button, but would like to use this proper classic taskbar which has features like button labels, toolbars and more, you can use my fork of the popular TaskbarX program which fixes compatibility with Windows 11 and adds this behavior; a guide about how to set it up is available here.

You can try one of my other utilities available here.

You can manually configure the application by setting registry values. The registry entries supported by this application are described in this file.

Even more registry configuration settings are described in the following document, make sure to take a look on it here.

First, move the taskbar to the bottom, if you have moved it to the top or to the sides. This is so that the Windows 11 taskbar can render correctly.

A changelog is available here.

Hooking is done using the excellent funchook library (GPLv2 with linking exception), which in turn is powered by the diStorm3 (3-clause BSD) disassembler. Thus, I am offering this under GNU General Public License Version 2.0, which I believe is compatible.

The following prerequisites are necessary in order to compile this project:

That's it. later, if you want to recompile, make sure to update the repository and the submodules first: