Questions? Comments? Feedback? Chat with us on gitter!

A library for manipulating pitch and duration in an algorithmic way, for resynthesizing speech.

This library can be used to resynthesize pitch in natural speech using pitch contours taken from other speech samples, generated pitch contours, or through algorithmic manipulations of the source pitch contour.

What can you do with this library?

Apply the pitch or duration from one speech sample to another.

"Mary" in "mary1.wav" is produced with more emphasis than in "mary2.wav". It is longer and carries a more drammatic pitch excursion. Using ProMo, we can make mary1.wav spoken similar to mary2.wav, even though they were spoken in a different way and by different speakers.

Duration and pitch carry meaning. Change these, and you can change the meaning being conveyed.

Note that modifying pitch and duration too much can introduce artifacts. Such artifacts can be heard even in pitch morphing mary1.wav to mary2.wav.

The following image shows morphing of pitch from mary1.wav to mary2.wav on a word-by-word level in increments of 33% (33%, 66%, 100%). Note that the morph adjusts the temporal dimension of the target signal to fit the duration of the source signal (the source and generated contours are equally shorter than the target contour). This occurs at the level of the file unless the user specifies an equal number of segments to align in time (e.g. using word-level transcriptions, as done here, or phone-level transcriptions, etc.) 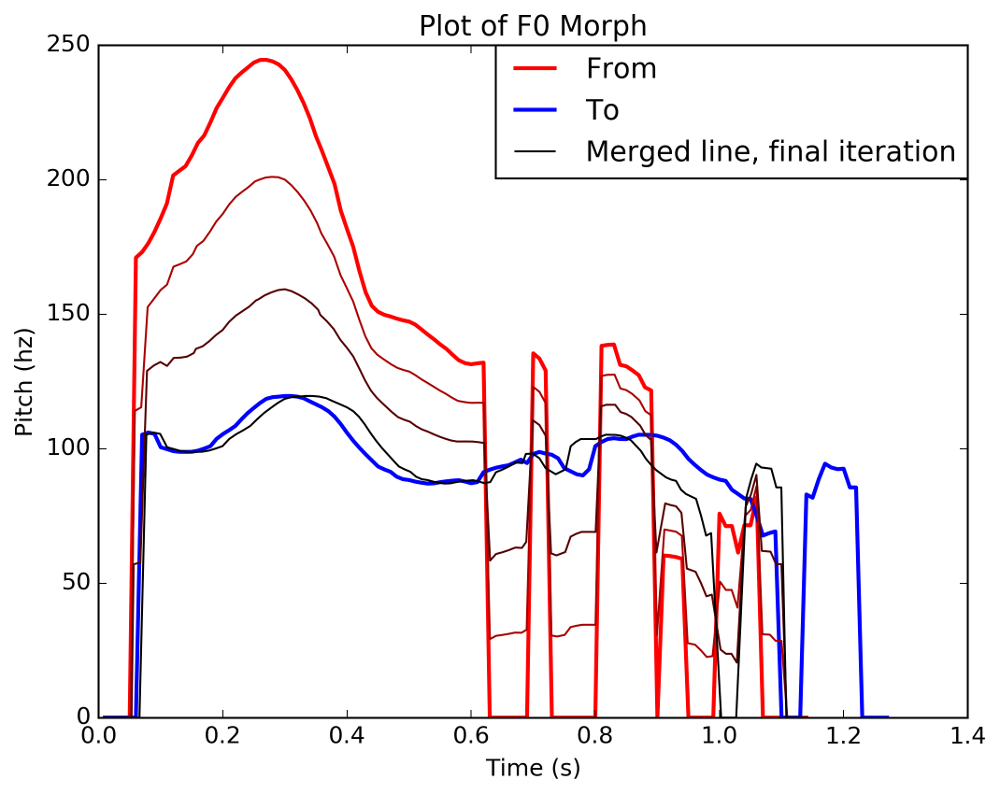 With the ability to morph pitch range and average pitch, it becomes easier to morph contours produced by different speakers:

The following image shows four different pitch manipulations. On the upper left is the raw morph. Notice that final output (black line) is very close to the target. Differences stem from duration differences.

The longer the speech sample, the more representative the pitch range and mean pitch will be of the speaker. In this example both are skewed higher by the pitch accent on the first word. 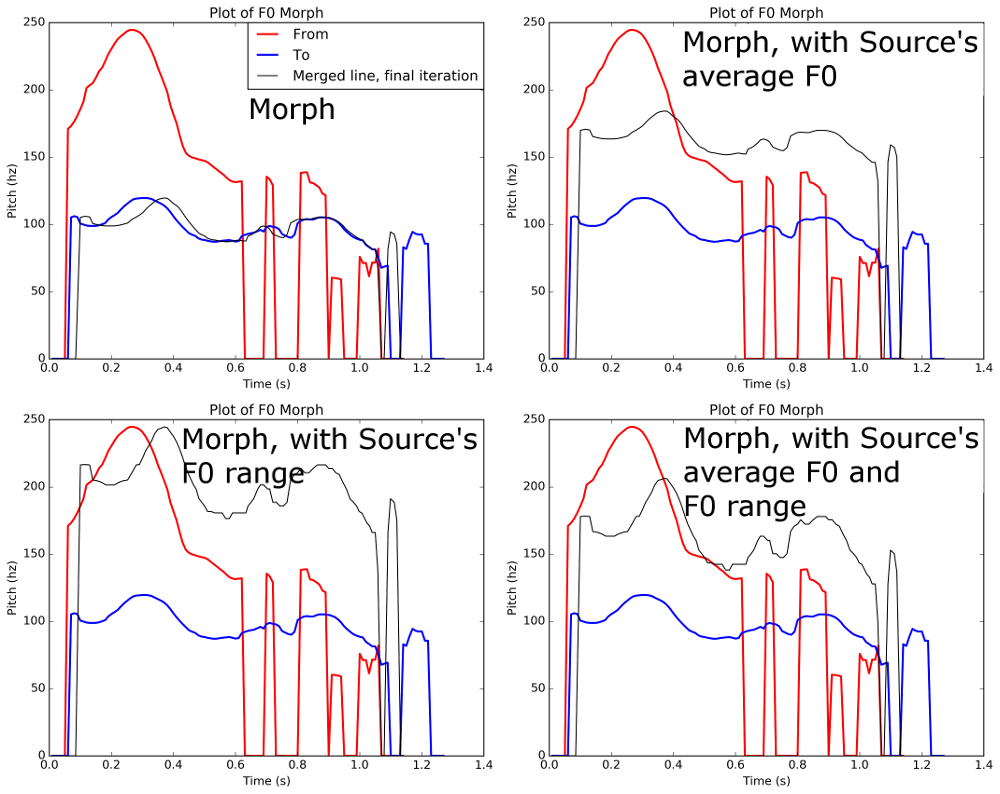 The following image shows morphing of duration from mary1.wav to mary2.wav on a word-by-word basis in increments of 33% (33%, 66%, 100%). This process can operate over an entire file or, similar to pitch morphing, with annotated segments, as done in this example. 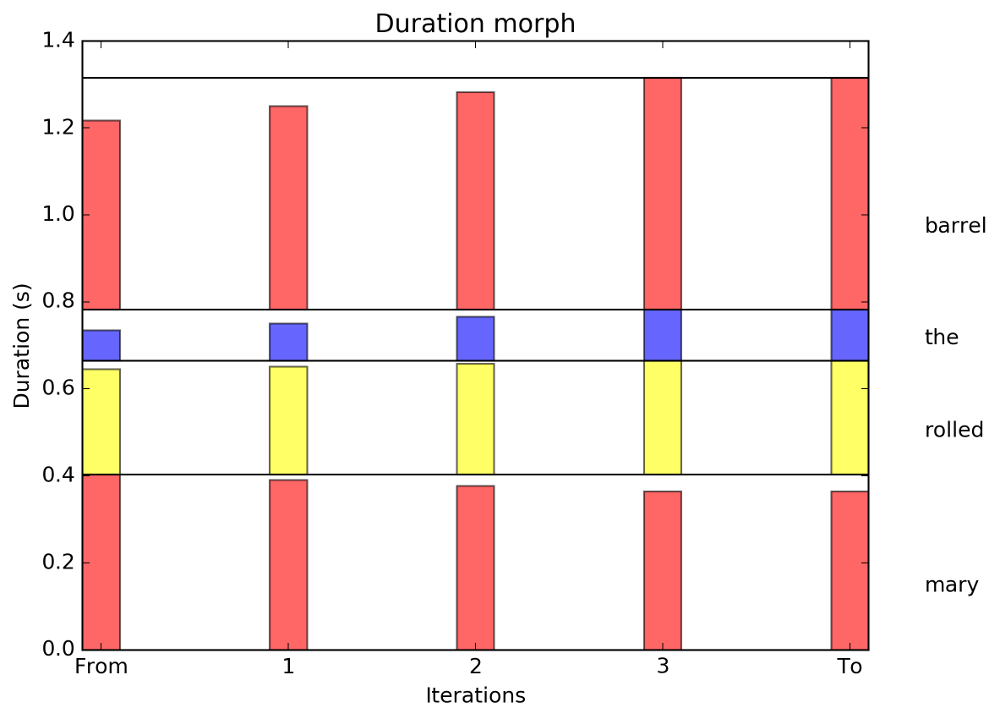 Tutorials for learning about prosody manipulation and how to use ProMo are available.

My praatIO library is used extensively and can be downloaded here

Matplotlib is needed if you want to plot graphs. Matplotlib website

Matplotlib and SciPy are non-trivial to install, as they depends on several large packages. You can visit their websites for more information. I recommend the following instructions to install matplotlib which uses python wheels. These will install all required libraries in one fell swoop.

On Mac, open a terminal and type:

On Windows, open a cmd or powershell window and type:

If you on Windows, you can use the installer found here (check that it is up to date though) Windows installer

PraatIO is on pypi and can be installed or upgraded from the command-line shell with pip like so:

Otherwise, to manually install, after downloading the source from github, from a command-line shell, navigate to the directory containing setup.py and type:

If python is not in your path, you'll need to enter the full path e.g.:

If you use ProMo in your research, please cite it like so:

Development of ProMo was possible thanks to NSF grant BCS 12-51343 to Jennifer Cole, José I. Hualde, and Caroline Smith and to the A*MIDEX project (n° ANR-11-IDEX-0001-02) to James Sneed German funded by the Investissements d'Avenir French Government program, managed by the French National Research Agency (ANR).

Prososdy Morph: A python library for manipulating pitch and duration in an algorithmic way, for resynthesizing speech.