There are two complications to hosting multiple applications in a single APK:

If you are eager to jump into the code without reading the docs. Here is quick overview of the modules:

To build the sample, open the project in Android Studio or run ./gradlew :sample:installDebug.

The Structure of a Stuffed APK 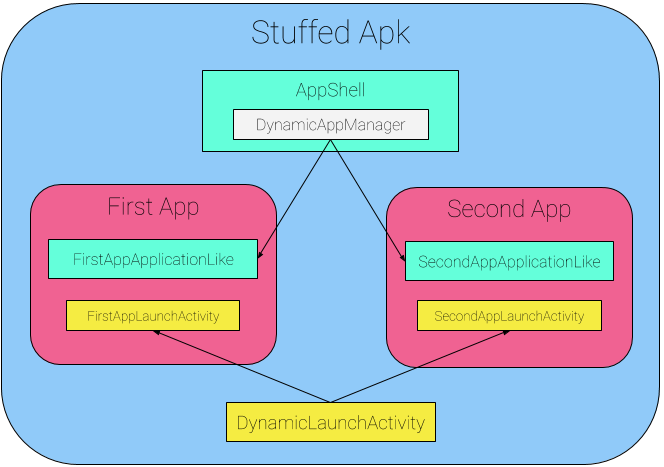 An ApplicationLike is type that adheres to roughly the same interface as the Android framework Application type. It acts as a delegate for any application-related functionality in the application lifecycle and manages the global state for an app family.

DynamicLaunchActivity serves as the primary entry point for the stuffed application. Given that the Android system doesn’t know which app family is active when launching the app, Stuffing provides a layer of indirection/routing via this special activity. When this activity starts, it uses the DynamicAppManager to determine which child Activity should be launched

DynamicAppManager is the heart of stuffing as it’s responsible for managing the multiple application stuffed into the APK:

There are two discrete implementations of this interface:

The primary reason for have two implementation is provide an easy way to build multiple flavors of the app. For instance, while the primary flavor of the app could include both apps, it is useful to have an additional build flavor for testing that only include your new app. Swapping different implementations of DynamicAppManager makes this easy.

When DynamicAppManager.switchToAppFamily is called, the class will iterate through all manifest components using PackageManager and disable/enable the right set of components depending on the target app family. Switching between app families can take a while if your app has a lot of components. While the switch is in progress, a special AppSwitchActivity is displayed to the user.

This activity runs in a separate process, and it waits to receive a Intent.ACTION_PACKAGE_CHANGED] before allowing the transition to continue. This Intent signals that the package manager has finished updating with the app switch changes. If we don't wait for this signal to be received before switching to the new application, the OS might close that application once it receives that signal since it thinks the app has changed.

AppSwitchActivity works around that by waiting for this signal, and then kicking off the launch of the new intended Activity once it has been processed.

Using Stuffing in an Existing App

Let’s assume that you have two android-application modules in your Gradle project: :app and :new-app. - :new-app contains the code for your new Android application that you would like to stuff into your primary application :app.

The next step would be to annotate all components in the AndroidManifests of both apps with appFamiles metadata. - The value will be one of two strings: old or new, depending on which app the component belongs to. - Side note: if had a module with some components that are being shared between both apps, the appFamilies metadata can be omitted, which would automatically include the Component into both application. - Example:

To create a new entry point for both apps, add DynamicLaunchActivity in the top level manifest of :app:

Once DynamicLaunchActivity is added, define a default Activity for each app family in thier respective manifests:

Create a new top level application in :app, which is responsible for creating and initializing MultiDynamicAppManager that will delegate execution to the right application.

In order to make the DynamicAppManager injectable with Dagger, some special treatment is needed. Since it is created very early in the application lifecycle, even before the Dagger application component is created, it needs to be manually bound to the DI graph

Add a switcher for Applications

Now that DynamicAppManager is available in your application’s dagger graph, it can be used to provide a way to manually switch from your old application to your new application. For instance, you can trigger this code when a use clicks on the “Try New App” somewhere in settings: