This is an implemenation of a simple side scrolling platformer game running on an Arduino Atmega328 inspired by classic 80s games like Giana Sisters or Super Mario Bros.

The game was written as a gift and introduction to programming and Arduinos for my Son's 10th birthday, but it may be of interest to others, so here goes.. 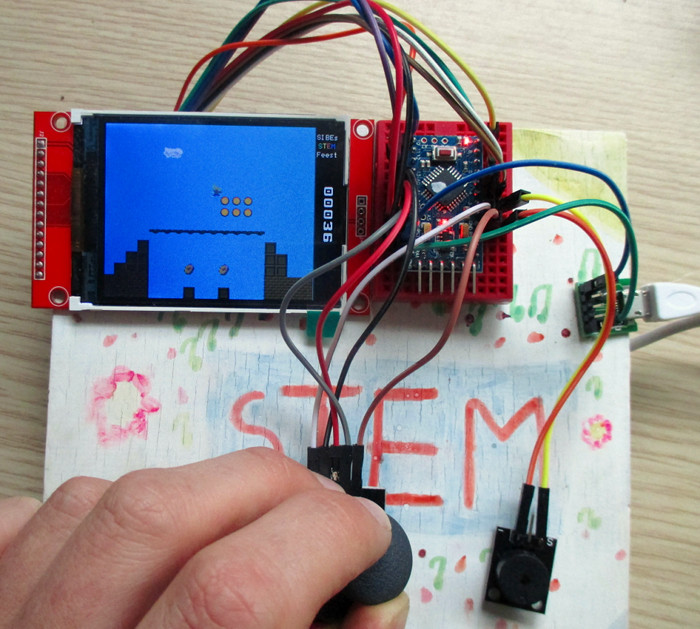 I got the inspiration for this from João Vilaça's Handheld-Color-Console, so the hardware is very similar to that:

In total, around 10-15 euros if sourced from Ebay or Aliexpress.

Wiring is idential to João Vilaça's setup, except that a USB power bank and Micro-B USB breakout is used for power instead of a battery box and AA batteries.

While the hardware is based on João Vilaça's work, the software has been written from scratch. The main game logic is in game.c.

Like most of classic games, the rendering is structured around tiles, E.G. 16x16 blocks of pixels.

The hardware scrolling feature of the ILI9341 is used to scroll the background, so only a single column of background pixels (and the player) needs to be redrawn when scrolling.

The content of the world (E.G. background and powerups) is described in a world map, E.G. a description of what graphics tile should be rendered where and what should happen if the player enters the tile.

The world map and tile graphics is stored in flash (PROGMEM) to save RAM, and the currently displayed part of the world is copied into RAM for easier processing (see the screen array).

The world map and tiles are stored as 4 bits per pixel arrays, which are generated from the PNG images under gfx/ by png2h.py. The player and background tiles are 16x16 pixels. The world map is from gfx/world.png, which makes is very easy to tweak the world map with E.G. The Gimp:

And then a few tiles for the player (boy/girl) and digits for the points.

At each frame of the game, the new player position and speed is calculated based on gravity and joystick actions, and collissions with the world are checked and resolved (for solid, E.G. tile 1..5) or the points are updated and powerup removed (tile 12..15) based on world map. Finally the screen is scrolled if needed.

Currently around 21KB of flash and 1090B RAM is used, so there's still room for quite some additions.

Arduino-Makefile is used to build the game. The grahics tiles under gfx/ are converted into the native format using png2h.py, which needs Python and Python-Pillow. On Debian systems, doing the following should be sufficient:

Once that is taken care of, building is simply:

For ease of development the hardware can also be emulated on a PC. This emulation needs SDL 2.x. To Build, simply do:

To run in fullscreen mode, export FULLSCREEN=1 to the environment:

The joystick is emulated by the arrow keys and space bar. Escape or Q quits. Audio is currently not emulated.