Notice: If you want to test new features and enhancements before they are considered stable and do not mind to encounter bugs, feel free to use the development version. When encountering wrong behavior, consider opening issues in the GitHub repository to help improving the overall stability of aurman.

Stopped development for public use

I am not willing to continue developing aurman for public use. The GitHub issues are closed, I am not interested in feedback, feature requests or bug reports anymore. aurman is going to be developed for myself only from now on, I suggest migrating to yay.

And also a clarification about the yay recommendation:

I am recommending yay instead of aurman, because from a users point of view, it may be nicer to have the possibility to give feedback. From a pure technical point of view, there is no need to switch, if you are happy with aurman as of now. Since I need an AUR helper myself, aurman development will continue. Do not expect frequent updates however, because current aurman fulfills all of my needs. If I do not encounter bugs, or other changes are needed in order for aurman to work properly, there is nothing to be done for me. In case that this situation changes, the README in the GitHub repository will inform about it.

Even though it may seem like an AUR helper is targeted at inexperienced users, the opposite is the case. aurman is targeted at advanced users, who are familiar with pacman, makepkg and most of all with the AUR.

aurman is an AUR helper, it can't and will never be a replacement for the sometimes needed concept of "human interaction". If you ever encounter an issue whereby aurman e.g. is not able to find a dependency solution, and you do not know how to solve the problem either, you should not use an AUR helper. Even though the specific problem may be a bug in the aurman implementation, it is always expected that you as a Turing-complete user know what to do.

If you do not, do not use aurman.

Also: If you are already failing to install aurman, because you do not know e. g. how to import PGP keys or how to fulfill aurman dependencies manually, you should not use aurman. Last but not least: The GitHub issues are not for support, they are only for feature requests, bug reports or general discussions. To reduce the noise by users who should not use aurman, but still do, users who fill out issues in a non-sensible way may be banned from this repository without further warning.

Notice: The only supported way to install aurman, is to install it from the AUR. There are linux distributions, shipping prebuilt aurman versions, that is not supported in any way.

aurman is a pacman wrapper. All pacman operations are supported, and calling aurman with an operation besides --sync or -S passes the arguments to pacman.

Native pacman options for --sync or -S that are passed to pacman:

Native pacman options for --sync or -S that are also used by aurman:

Options for --sync or -S exclusive to aurman:

aurman conforms to the XDG Base Directory Specification:

Notice: Use of optimistic_versioning is not recommended since this flag should only be used when needed.

Notice: Use of ignore_versioning is not recommended since this flag should only be used when needed.

By default aurman assumes the following priorities in a case where multiple packages with the same names are available (high to low):

The order of repositories in the configuration file matters; repositories listed first will take precedence over those listed later in the file when packages in two repositories have identical names, regardless of version number.

Overriding this priority has to be done via the aurman config.

Notice: These packages will be excluded from the pacman --sysupgrade by --ignore. Otherwise pacman would replace these packages.

Create a key called no_notification_unknown_packages in the section [miscellaneous].

You may also disable the notification for certain packages.

Create a section [no_notification_unknown_packages] and list the names of the packages.

Create a key called no_sudo_loop in the section [miscellaneous].

Set the preselected answer for the question: Do you want to see the changes of x? to yes.

Create a key called default_show_changes in the section [miscellaneous].

Notice: Not setting this option retains the default, which is no.

Ignore missing or incomplete arch fields in the build script, (passing -A to makepkg during package building)

Create a key called ignore_arch in the section [miscellaneous].

Set packages that are to be treated as development packages

List the names of the packages in the section [devel_packages].

Specify a non-default folder to save aurman cache files

Create a key called cache_dir in the section [miscellaneous].

Specify the timeout for AUR RPC and archlinux.org feed requests (in seconds) (default is 5)

Create a key called aur_timeout in the section [miscellaneous].

Create a key called sudo_timeout in the section [miscellaneous].

Make use of the undocumented --ask flag of pacman

Create a key called use_ask in the section [miscellaneous].

aurman will use --ask=4 if this config option is set. You will not have to confirm things like the installation of packages or the removal of conflicting packages again. "Again" - meaning again for pacman. You will still see the overview of aurman, which only predicts what will happen, and you will have to confirm unless --noconfirm was set. To be clear: aurman only predicts what will happen in every case. When using --ask=4, it may be possible that a conflict will not be detected by aurman. Hence, using --ask=4 may lead to unintended removal of package(s). All in all it comes down to: "redundant" confirmations of actions (less prone to errors) or "not redundant" confirmations of actions (more prone to errors).

In order to discover available updates, search for potential packages to install and more, it is useful to get machine-readable descriptions of the potential sync/install/update transactions aurman can propose.

aurmansolver [options] answers this need, by providing a json description of the equivalent aurman [options] transaction, but without carrying out any changes.

One example use is with -Su, in order to list packages which have updates available.

See https://github.com/polygamma/aurman/wiki/Using-aurman-as-dependency-solver for a detailed explanation

aurman wants to remove packages that should not be removed - what's the matter?

Please check if the problem arises because aurman has assumed .so dependencies to be unfulfilled. E.g. libavcodec.so=57-64 which requires a specific version of the mentioned .so. This may be the case because a providing AUR package only lists libavcodec.so as being provided without specifying the version. Hence aurman cannot be sure if the version will match, since this can only be known after building the package, and thus assumes that the dependency is not fulfilled. You may change this behavior by yielding --optimistic_versioning via the commandline. Now, aurman (optimistically!) assumes the dependency will be fulfilled. However, you should make sure that the version in the built package is going to be the needed one, otherwise the optimism was misplaced and aurman's behavior when installing the packages will be undefined.

Notice: aurman will never remove packages on its own. aurman just predicts what will happen.

How do I change the editor used by aurman for editing PKGBUILDs etc.?

aurman uses the environment variables VISUAL and EDITOR, hence you will have to change these variables.

If VISUAL is set, aurman uses this,

else if EDITOR is set, aurman uses this,

How to install packages whose names are saved in a file with aurman?

aurman does not implement this functionality. Instead you may use standard shell command substitution. e.g.: aurman -S $(cat ~/packages_names.txt).

I am using Arch ARM and I am getting expac errors when executing aurman, what to do?

tl;dr - install the latest expac-git version from the AUR and everything works

How to achieve full batch interaction with aurman?

If I want to run aurman from scripts, which settings should I use?

See the answer to the previous question.

I changed dependencies in a PKGBUILD, aurman does not respect the changes. Why?

aurman relies on the AUR RPC for dependency solving. .SRCINFO and PKGBUILD files are not taken into account. 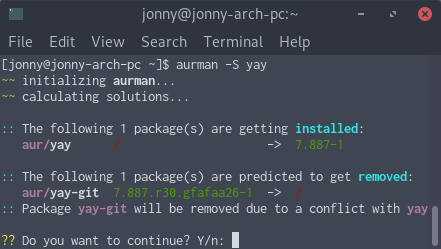 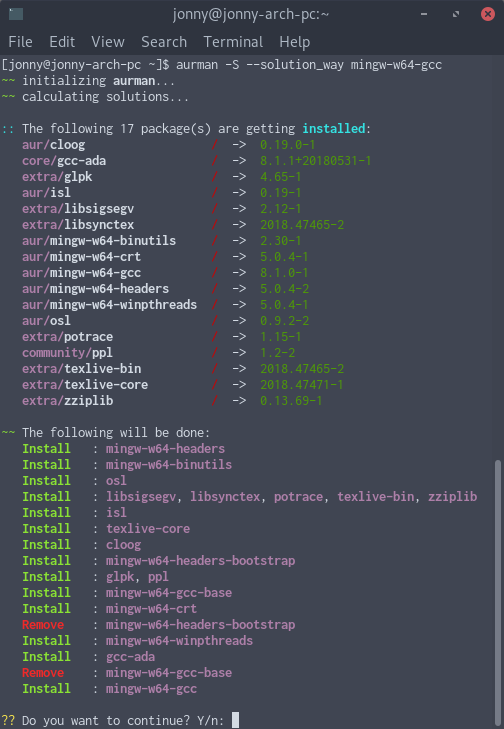 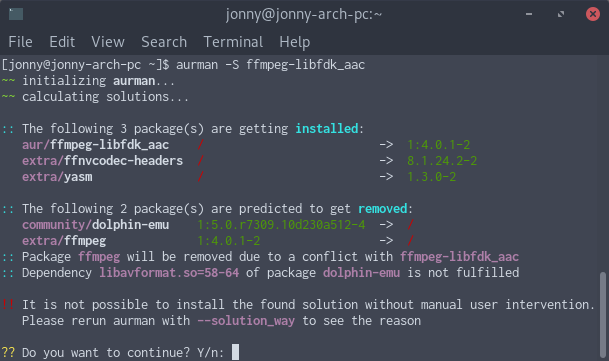 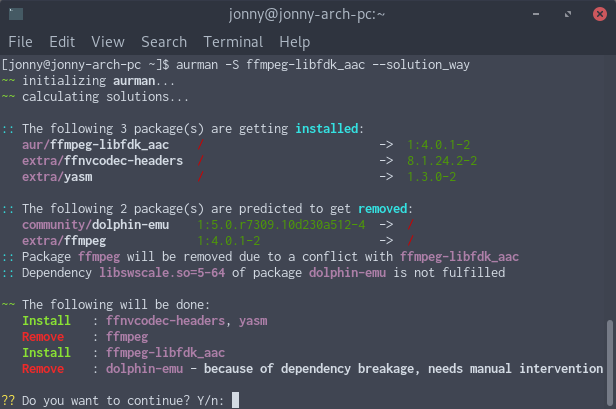