This program generates bitmaps that are locally similar to the input bitmap. 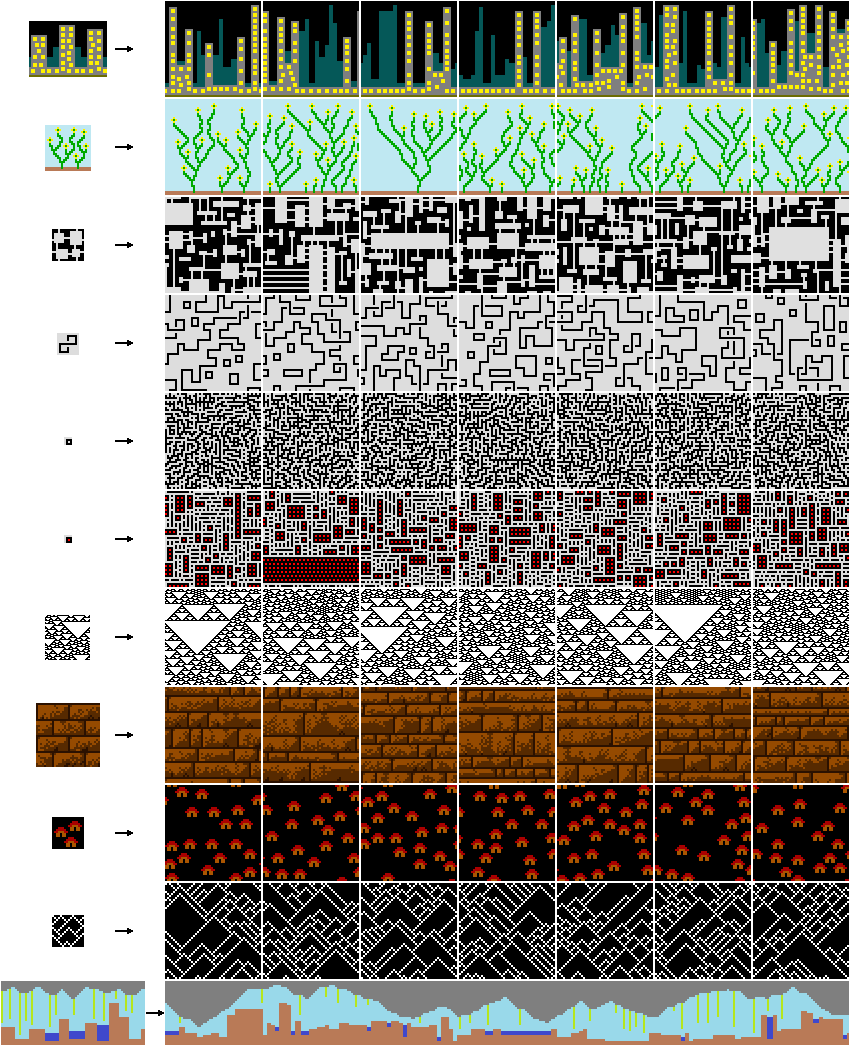 In the examples typical value of N is 3.

WFC initializes output bitmap in a completely unobserved state, where each pixel value is in superposition of colors of the input bitmap (so if the input was black & white then the unobserved states are shown in different shades of grey). The coefficients in these superpositions are real numbers, not complex numbers, so it doesn't do the actual quantum mechanics, but it was inspired by QM. Then the program goes into the observation-propagation cycle:

On each step the overall entropy decreases and in the end we have a completely observed state, the wave function has collapsed.

It may happen that during propagation all the coefficients for a certain pixel become zero. That means that the algorithm has run into a contradiction and can not continue. The problem of determining whether a certain bitmap allows other nontrivial bitmaps satisfying condition (C1) is NP-hard, so it's impossible to create a fast solution that always finishes. In practice, however, the algorithm runs into contradictions surprisingly rarely.

Wave Function Collapse algorithm has been implemented in C++, Python, Kotlin, Rust, Julia, Go, Haxe, JavaScript and adapted to Unity. You can download official executables from itch.io or run it in the browser. WFC generates levels in Bad North, Caves of Qud, several smaller games and many prototypes. It led to new research. For more related work, explanations, interactive demos, guides, tutorials and examples see the ports, forks and spinoffs section.

Watch a video demonstration of WFC algorithm on YouTube: https://youtu.be/DOQTr2Xmlz0

The simplest nontrivial case of the algorithm is when NxN=1x2 (well, NxM). If we simplify it even further by storing not the probabilities of pairs of colors but the probabilities of colors themselves, we get what we call a "simple tiled model". The propagation phase in this model is just adjacency constraint propagation. It's convenient to initialize the simple tiled model with a list of tiles and their adjacency data (adjacency data can be viewed as a large set of very small samples) rather than a sample bitmap.

Lists of all the possible pairs of adjacent tiles in practical tilesets can be quite long, so I implemented a symmetry system for tiles to shorten the enumeration. In this system each tile should be assigned with its symmetry type.

Note that the tiles have the same symmetry type as their assigned letters (or, in other words, actions of the dihedral group D4 are isomorphic for tiles and their corresponding letters). With this system it's enough to enumerate pairs of adjacent tiles only up to symmetry, which makes lists of adjacencies for tilesets with many symmetrical tiles (even the summer tileset, despite drawings not being symmetrical the system considers such tiles to be symmetrical) several times shorter. 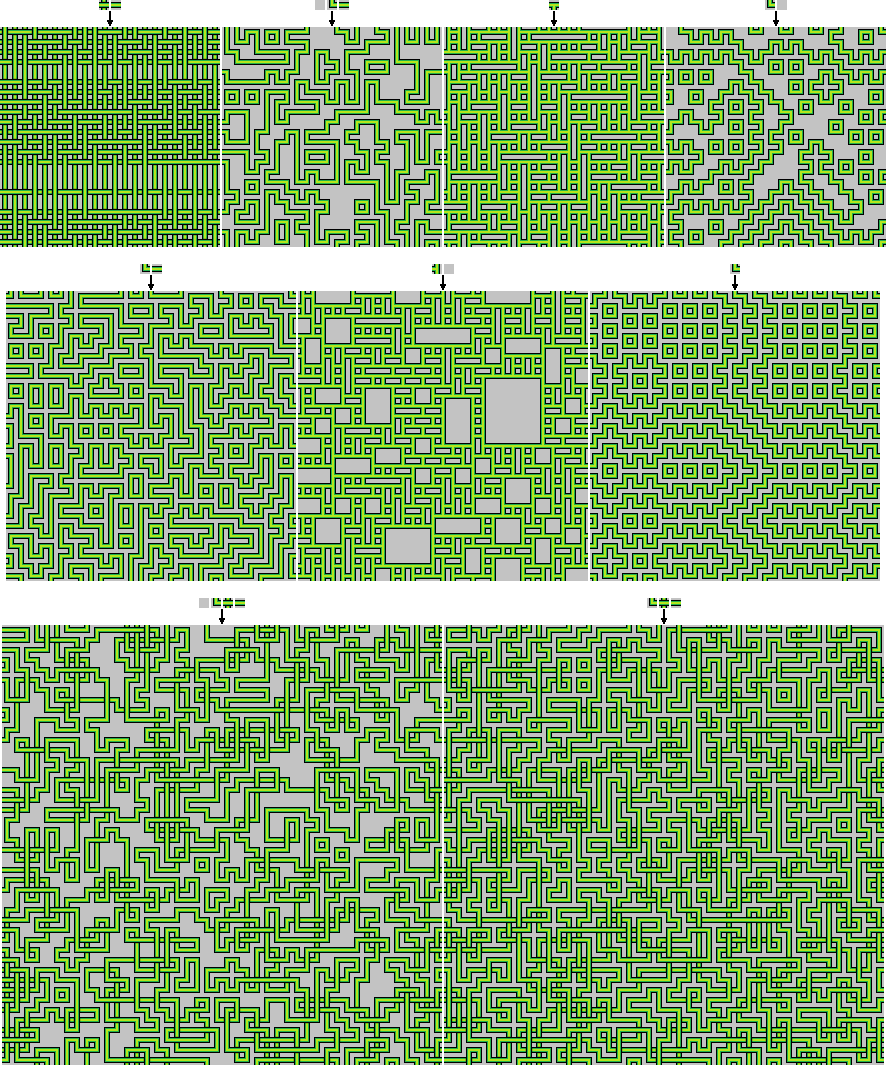 Note that the unrestrained knot tileset (with all 5 tiles being allowed) is not interesting for WFC, because you can't run into a situation where you can't place a tile. We call tilesets with this property "easy". Without special heuristics easy tilesets don't produce interesting global arrangements, because correlations of tiles in easy tilesets quickly fall off with a distance. Many easy tilesets can be found on cr31's site. Consider the "Dual" 2-edge tileset there. How can it generate knots (without t-junctions, not easy) while being easy? The answer is, it can only generate a narrow class of knots, it can't produce an arbitrary knot.

Note also that Circuit, Summer and Rooms tilesets are non-Wang. That is, their adjacency data cannot be induced from edge coloring. For example, in Circuit two Corners cannot be adjacent, yet they can be connected with a Connection tile, and diagonal tracks cannot change direction.

Voxel models generated with WFC and other algorithms will be in a separate repo.

WFC algorithm supports constraints. Therefore, it can be easely combined with other generative algorithms or with manual creation.

Here is WFC autocompleting a level started by a human:

ConvChain algorithm satisfies the strong version of the condition (C2): the limit distribution of NxN patterns in the outputs it is producing is exactly the same as the distributions of patterns in the input. However, ConvChain doesn't satisfy (C1): it often produces noticeable artefacts. It makes sense to run ConvChain first to get a well-sampled configuration and then run WFC to correct local artefacts. This is similar to a common strategy in optimization: first run a Monte-Carlo method to find a point close to a global optimum and then run a gradient descent from that point for greater accuracy.

Note that the "Simple Knot" and "Trick Knot" samples have 3 colors, not 2.

One of the dimensions can be time. In particular, d-dimensional WFC captures the behaviour of any (d-1)-dimensional cellular automata.

This project builds upon Paul Merrell's work on model synthesis, in particular discrete model synthesis chapter of his dissertation. Paul propagates adjacency constraints in what we call a simple tiled model with a heuristic that tries to complete propagation in a small moving region.

It was also heavily influenced by declarative texture synthesis chapter of Paul F. Harrison's dissertation. Paul defines adjacency data of tiles by labeling their borders and uses backtracking search to fill the tilemap.

WFC is a console application that depends only on the standard library. Get .NET Core for Windows, Linux or macOS and run

Alternatively, use build instructions from the community for various platforms from the relevant issue. Casey Marshall made a pull request that makes using the program with the command line more convenient and includes snap packaging.

Some samples are taken from the games Ultima IV and Dungeon Crawl. Circles tileset is taken from Mario Klingemann. Idea of generating integrated circuits was suggested to me by Moonasaur and their style was taken from Zachtronics' Ruckingenur II. Cat overlapping sample is taken from the Nyan Cat video, Qud sample was made by Brian Bucklew, Magic Office + Spirals samples - by rid5x, Colored City + Link + Link 2 + Mazelike + Red Dot + Smile City overlapping samples - by Arvi Teikari. Summer tileset was made by Hermann Hillmann. Voxel models were rendered in MagicaVoxel. 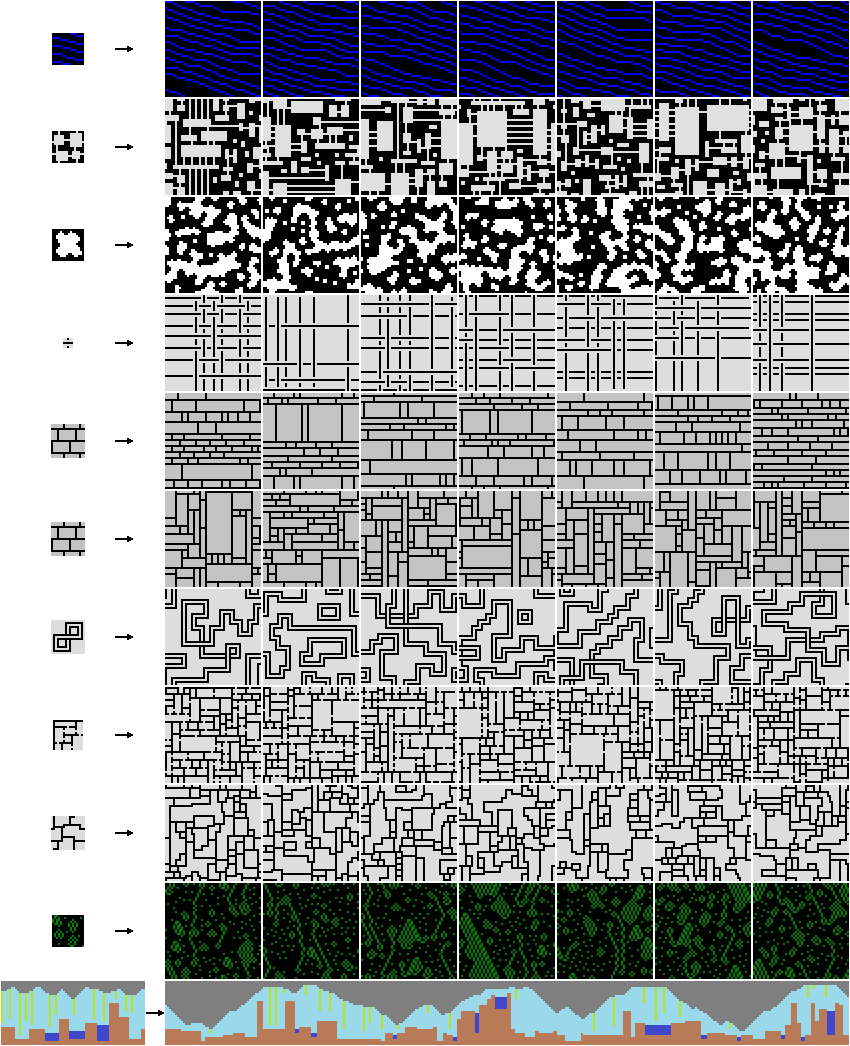 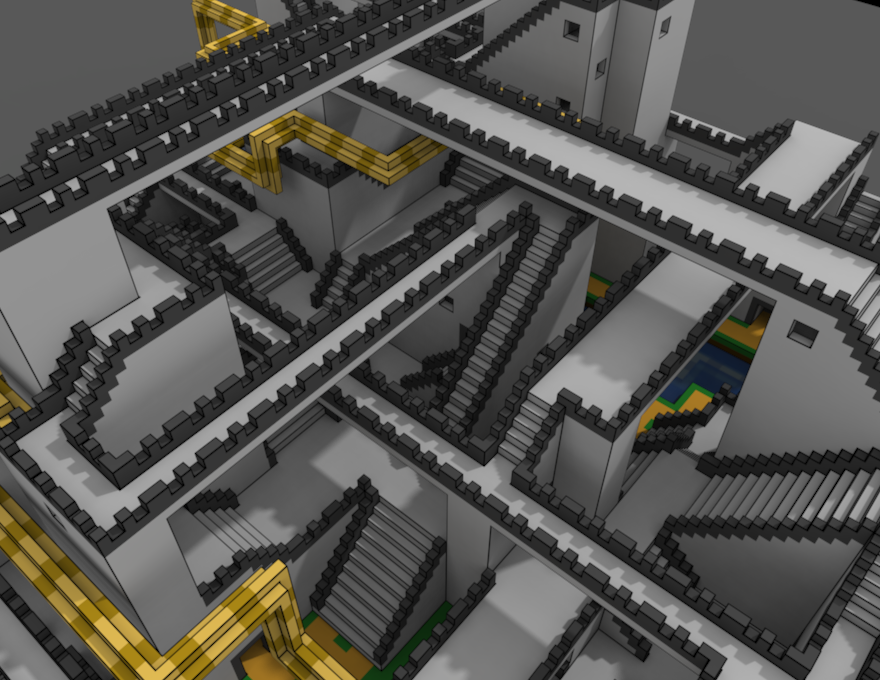 Bitmap & tilemap generation from a single example with the help of ideas from quantum mechanics.