A demonstration of text detection and recognition employed in a pipeline for scene text recognition, built as part of my Final Year Project at Nanyang Technological University. Currently able to either run text recognition through a live camera feed at an average of 20 FPS or through a sequential list of demo images.

Text recognition, which was the project focus, is done through a self-trained CRNN model, through which its implementation in PyTorch is available here. (Pre-trained model will be made available)

The CRNN model was trained over the MJSynth Dataset and fine-tuned with the COCO-Text dataset. Its performance against benchmark datasets along with their comparisons against what was reported in the paper are as tabulated below. Do note that the ICDAR13 test dataset was filtered according to constraints mentioned here when used to measure the model's accuracy.

Due to the changes in grading in response to the COVID19 situation, the presentation was conducted via a video recording which summarizes the project journey and findings 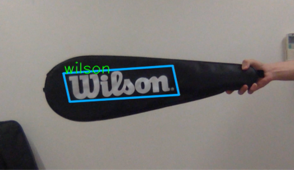 The program is also able to arrange and display the detected texts in the order which its meant to be read from the image as such. If the image contained multiple contexts of texts, the program is able to segregate them accordingly as well and not treat all of the words in the image as a single paragraph.

Ensure that you have both a trained EAST detection model and a trained CRNN model available. Placed them within the east_text_detector and crnn_text_recognizer folders respectively. Be sure to update the paths to the model in main.py.

Virtual environment can be set up via pipenv, add a --skip--lock flag to the install command if locking takes too long:

Run the program with the following command for live text recognition:

To run the recognition with static images, remove the --live flag, --sentence flag is optional to display detected texts in the order meant to be read from the image:

There's also an optional --angleCorrection flag for both live and static scenarios, which rotates texts that are detected to be angled, transforming them to be horizontal. This should help with the recognition model's accuracy, but there is yet any clearly evidence that this feature helps significantly, hence made toggle-able.

Program was built and tested on Python 3.6.5, MacOS.

Run the following command but change the path after /usr/lib to where the _C.so file of the torch library is located on your local machine, in this context I have it in a virtual env:

A live camera feed demonstration of text detection and recognition employed in a pipeline for scene text recognition, built as part of my Final Year Project at Nanyang Technological University.