A rule-based proxy app for macOS. 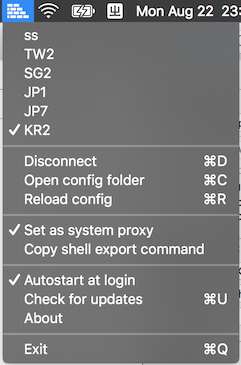 SpechtLite comes with a simple GUI that helps you switch profiles with different rule settings.

The core of SpechtLite consists just a few lines of code invoking NEKit. The app is provided as a demo of how NEKit works and let people test it though I thinks this app works well enough for real usage.

Note there is no fancy GUI configuration panel. But no worry, you simply need some YAML files to get everything running.

If you do need a fancy GUI, consider some commercial alternatives such as the Mac version of Surge.

Wingy is a free app built with NEKit available on App Store for your iDevice. Note Wingy is not created by or affiliated with me.

There is a template for Chinese users here, which is not maintained by me.

In case you do not know YAML, read first.

Below is a simple demo configuration file:

The file in list rule is a file containing a set of regular expressions to match the domain name of the host:

Click Open config folder and save you configuration into some xxxx.yaml file, then Reload config.

Finally, start proxy by click the name, and check Set as system proxy. Or you can set it yourself by setting system HTTP/HTTPS proxy to 127.0.0.1:port, SOCKS5 proxy (this will proxy things such as Mail.app) to 127.0.0.1:port+1 in System Preferences.

If you have any questions, please ask at

. And yes, you can ask in Chinese.

Do not open an issue unless it is one.

It's best if you can leave an issue relating to NEKit at NEKit issues.

Where is the "Full" version?

Here it is. Specht. It is still free and open source. The difference is that Specht takes full advantage of Network Extension.

As you can infer from the name of NEKit, it is designed for developing app based on Network Extension.

About two years ago, I wrote an iOS app called Soca which worked exactly as what SpechtLite does, but on iOS. Later, I extracted the core of Soca into SocaCore, which was the predecessor of NEKit. One drawback of Soca was that you had to use some dirty hack (play empty mp3 for every several minutes) to stay running in the background. But at that time, there was no alternatives.

That was one year before the release of Network Extension, so when Apple released iOS 9, I stopped developing Soca and changed to Surge iOS since I did not have a developer account which meant I could not apply for a Network Extension entitlement.

But there is no limit of background running on OS X and I've been using the OS X version of Soca (never released) until now. Since Surge OS X does not use Network Extension, there is no reason to switch.

Anyway, there were somethings I did not like about Surge (probably because it was not geek enough?) and I really do like to use open source things. So I decided to continue the development of Soca. I got to admit that it was harder than I thought. NEKit is the successor of Soca which is heavily refactored and enhanced to be used with Network Extension, and of cource, without it.

There were people asking for demo. And things only get better when people are using it. I'm just to lazy to write test code and even tests can not guarantee correction. So I build Specht using the exact same GUI of Soca OS X which I think is good enough.

But apple does not allow developers to distribute Mac app with network extension by themselve, which means there are only two ways to use Specht:

Well, I do not think many people would love to do the first and I'm just too lazy to do the second.

So here we are, Specht and SpechtLite. Anyone can use SpechtLite, but the limitations are:

While Specht does not have these limitations, you do have to sign the app yourself and there's nothing I can do since even Testflight does not support OS X.

Can I upload this to the Mac App Store?

SpechtLite is released under GPLv3. Considering App Store license is not compatible with GPL (see VLC for example), you probably can't.

NEKit is licensed under BSD 3-clause, so you can build an app with it and publish it on App Store instead.

If you know a way which guarantees that:

Please do let me know.

A rule-based proxy for macOS