This repository is a collection of tutorials for hosting a variety of server applications using Docker and Portainer. See the list of apps included in this template here.

Run install-docker.sh, to install docker, and add the current user to the docker usergroup.

On Oct 30, 2021 Pi OS bullseye was released and this is no longer needed. Older Pi OS buster releases run an old version of libseccomp that is causing problems with many containers that are preventing them from running. To fix this we need to manually install a newer version of libseccomp. However we first need to check and see if you are running an older version. To check please run sudo dpkg-query -W libseccomp.

If you are running a version less that 2.5 you will need to run the *upgrade script.

Reboot for changes to take effect

Click Settings, in the bottom-left corner, and paste the Portainer v2 json file link from below into the "App Templates" box. 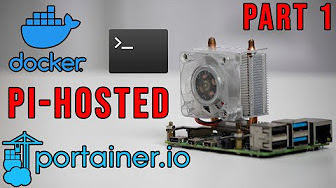 You can find more tutorials and useful information in our GitHub Docs folder.

Install, Update, Pre-Install and extra scripts can be found in our GitHub Tools folder.

See the list of contributors who participated in this project.

Raspberry Pi Self Hosted Server Based on Docker / Portainer.io