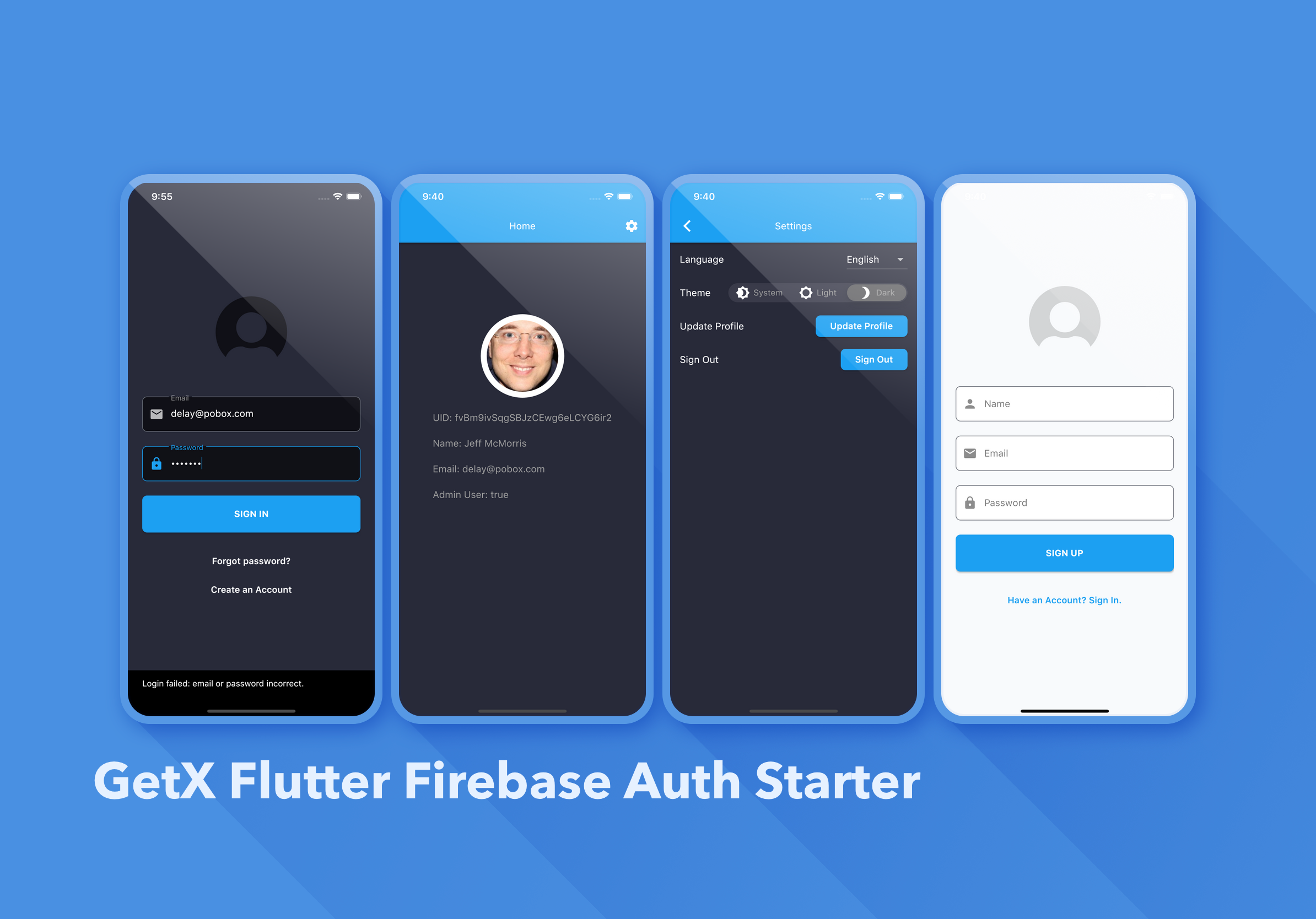 GetX is a relatively new package for Flutter that provides the missing link in making Flutter development simpler. I recently converted a firebase auth project I had created which used provider for state management. Switching to GetX simplified many of the pain points I have had with Flutter development. I no longer was having to pass context into functions. I could also better separate my logic from the UI. GetX also greatly simplifies routing, displaying snackbars and dialogs.

There are some really good projects and tutorials that I made use of in making this project. See these links for more help with GetX. GetX Documentation, Todo GetX example, Amateur Coder GetX Videos and Loading Overlay.

So why would you want to use GetX? Let me give you an example of how it simplified my own code. When I used Provider there was a lot more boilerplate code. It felt much more esoteric to use. GetX made my code easier to understand. Here is my code for main.dart original vs. GetX. 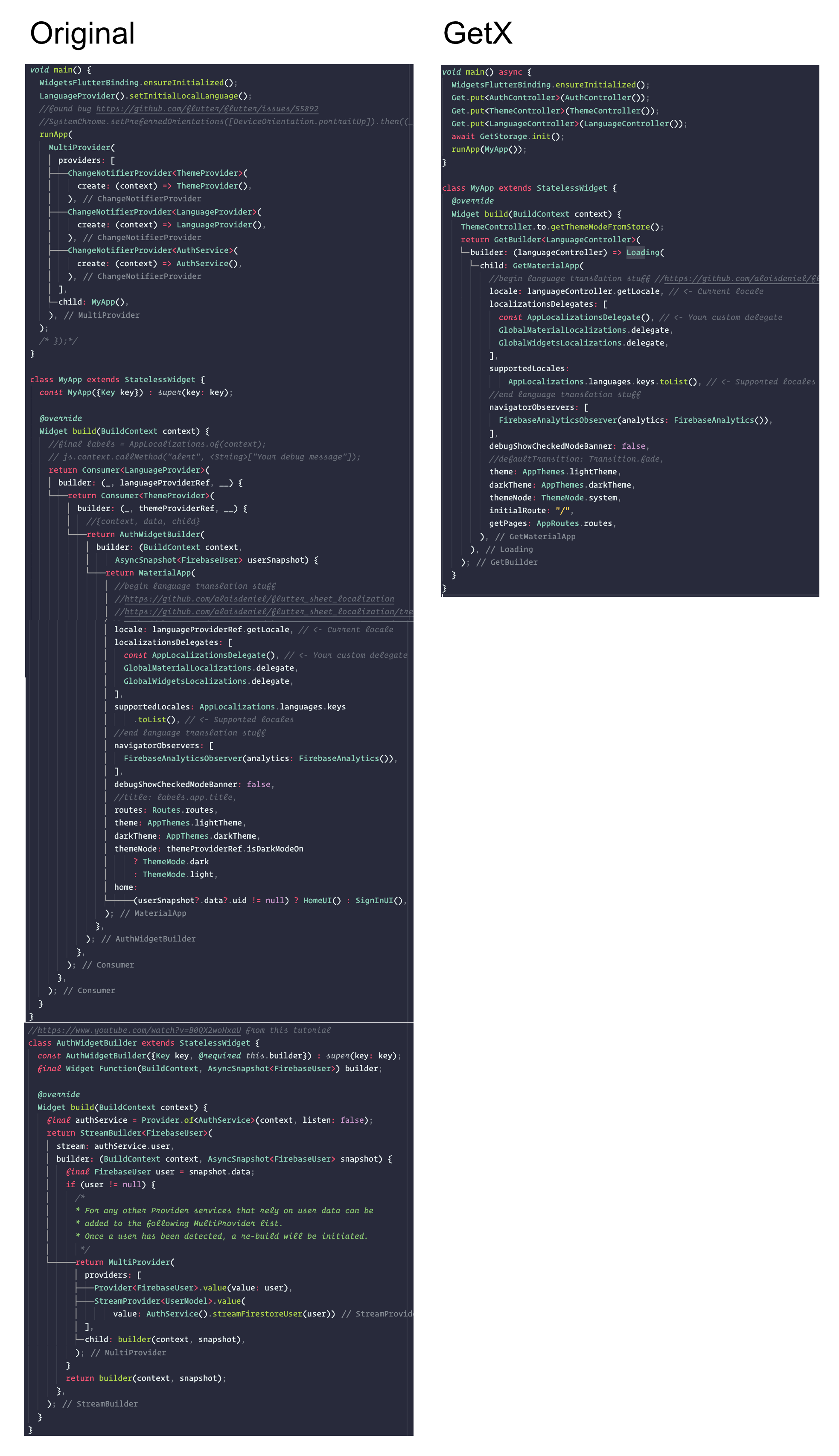 Once you understand the GetX way it becomes much easier to organize your code and separate your concerns between your UI and functions. For instance when calling a function in the UI I was having to handle the results from the function and display snackbars with the results. With GetX I was able to move the snackbars into the actual function which makes more sense since I no longer have to send success and fail messages in and out of functions. Below I show a button which signs in the user with the old way vs GetX way. I prefer the GetX way even though it isn’t a lot shorter, but I like having my logic all separated from the UI. 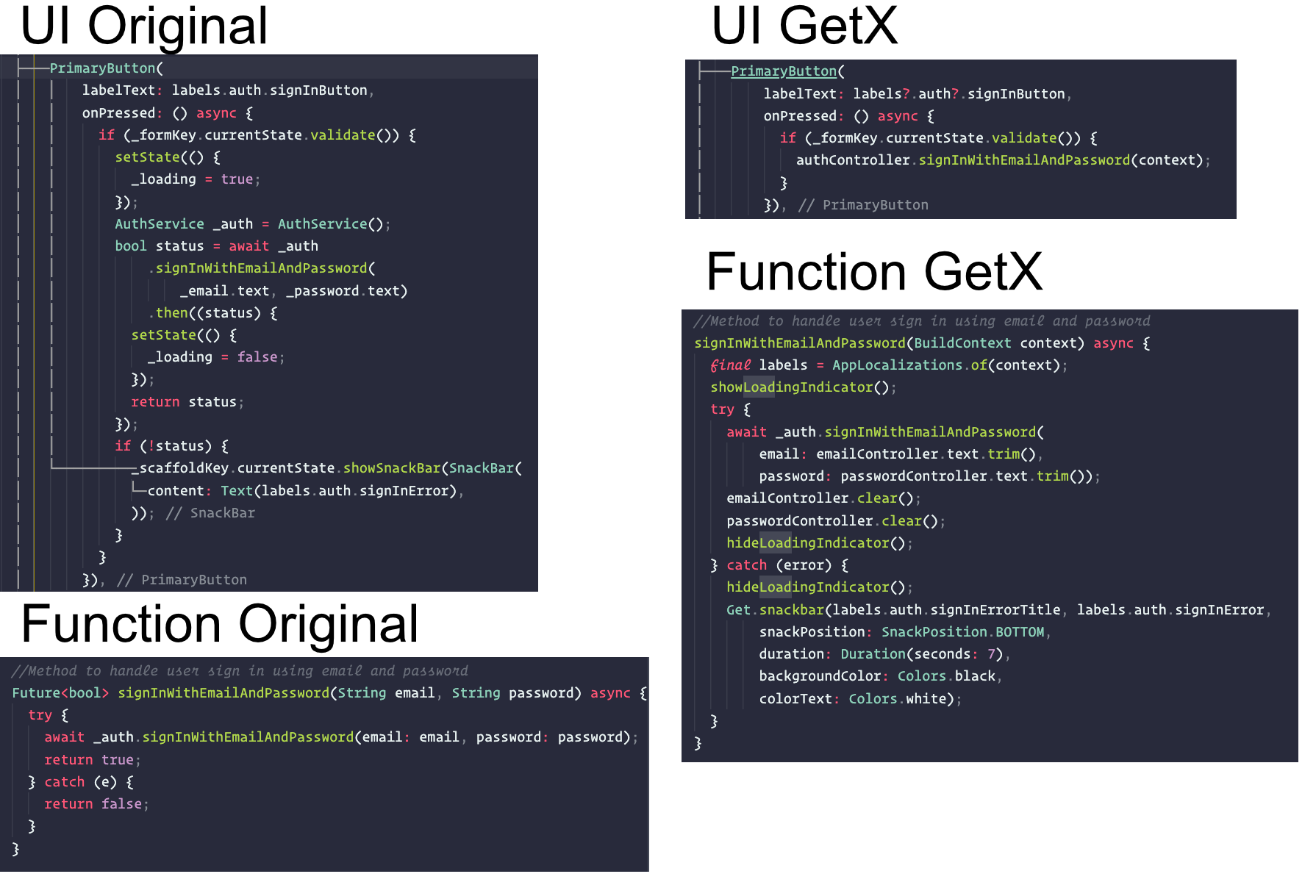 GetX also has a storage package called get_storage. It can take the place of shared preferences. It simplifies the way to store data on the device. Here is another example of before and after code.

There are many other features of GetX to make things simpler, such as working with themes, getting various device settings, etc. This package simplifies a lot of the problems developers face daily when building an app.

When building an auth project there are a lot of the features you need for a production flutter project. I wanted light and dark mode theming but also the ability to detect and switch themes automatically. I needed the ability to switch between languages easily and automatically detect the user’s language. I wanted a simple way to handle translating from english (the only language I know unfortunately). This is accomplished by running a commandline app to generate the GetX Localization class which pulls from a google sheet and easily translate into other languages. Also I needed a way to do simple user roles and it needed to be secure. I see a lot of auth packages including roles in the user’s collection in firestore which is usually editable by that same user. This would make it trivial for the user to assign himself admin privileges. I also wanted to show how to put some basic rules in firestore to secure it. Finally I wanted to have a way the user could alter their profile and change their email or password.

To handle the language translation you need to create a translation for your app in google sheets. Then open /helpers/update_localizations.dart and replace the docID and sheetId with your own documentId and sheetId. After doing that your will need to drop to the command line and go into the helpers directory. Then type: dart update_localizations.dart. This will create or overwrite the localization.g.dart file with your custom translation. There should not be a need to edit this file directly. Every time you make changes to your translation you will need to re-run this generator. 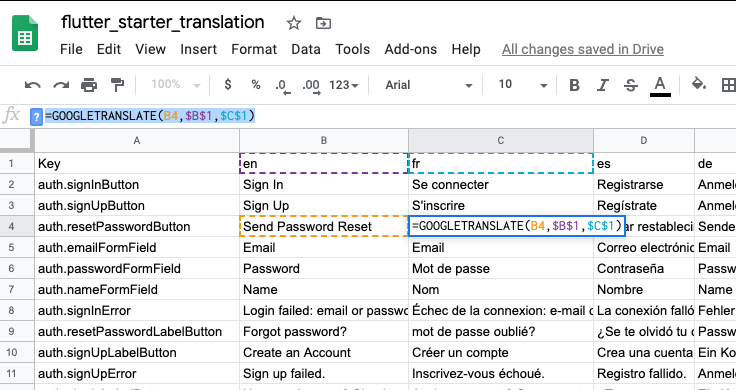 You can copy my sheet as a starting point for your own app. The cool thing about using a google sheet is you can have google translate a field with a simple google formula: =GOOGLETRANSLATE(B4,en,fr) This says translate the phrase in field B4 from english to french.

To handle user roles I created a separate admin collection and added a document with the same document id as the uid of my user. The reason to do this is to make it secure as explained in this medium article. I went with the second method explained in that article. If we had just put the roles as a field in the users collection any user could have upgraded themselves to an admin user. So by moving the admin role to a separate collection we can create some rules in firestore that allow the user to update fields about themselves without giving them access to change the role they were assigned. You can also generate other roles for the user by simply adding additional collections for the other roles.. 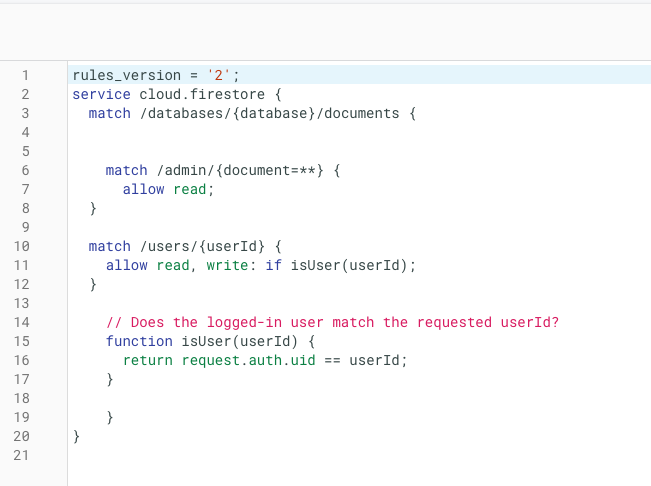 The first rule matches any user in the admin collection and allows you to read that document only. No one is allowed to write to this collection. I manually add my admin users through the firebase console. The second rule allows the user to read and write only if the user matches the currently logged in user. So a user can only change information about themselves. Here is how my collections are setup in firestore.

Finally I wanted to explain a little bit about my ui. I try to control as much as possible with the theme. You can change a lot about the look with the user interface by changing the theme. I am still learning about what all can be changed with just the theme. I also break out small ui components into a separate components folder. Then I make a custom widget instead of using the standard widget directly. This allows me to make changes in one spot if I decide to make ui changes to say a form field in my form_input_field.dart instead of changing a bunch of TextFormField widgets spread through a dozen files.

main.dart — contains info for maintaining the state of the app for the theme, language and user. It initializes language and theme settings. Sets up routing.

app_themes.dart — contains info related to our light and dark themes.

auth_controller.dart — our user and authentication functions for creating, logging in and out our user and saving our user data.

validator.dart — contains some validation functions for our form fields.

localizations.g.dart — this file is generated from our google sheet (do not manually edit this file).

user_model.dart — contains the model for our user saved in firestore.

menu_option_model.dart — contains our model for our language options and theme options in settings.

home_ui.dart — contains the ui for the home which shows info about the user.

settings_ui.dart — contains the settings screen for setting the theme and language and some user settings.

reset_password_ui.dart — sends a password reset email to the user.

sign_in_ui.dart — allows user to login with email and password.

update_profile_ui.dart — allows user to change his email or name.

form_input_field_with_icon.dart — handles our form field elements but has an icon too.

form_vertical_spacing.dart — just a space in the ui.

label_button.dart — one type of button in ui.

logo_graphic_header.dart — a graphic displayed in our ui.

primary_button.dart — another button in the ui.

segmented_selector.dart — a control used to select the theme.

Provider is also a great package and what I was using for Flutter development until I found GetX. Flutter is still new and evolving fast. It is fun to watch it progress so rapidly with the help of the Flutter community!

Anyway hopefully this project will help someone. Feel free to use any of it, I didn’t create all of this code as parts of it came from watching the tutorials and reviewing the projects mentioned above. Make sure you setup firebase with your project.