This project ties together Flask, Redis, RQ (Redis Queue) and Docker in a simple demo application. It can serve as template for other projects as well as an introduction on how to use Flask with RQ while managing it all with docker-compose.

In the web application you can launch long running jobs which are put into a RQ task queue. From there a RQ worker picks it up and executes it. During execution the job reports back some progress information and – if execution was successful – the job result. 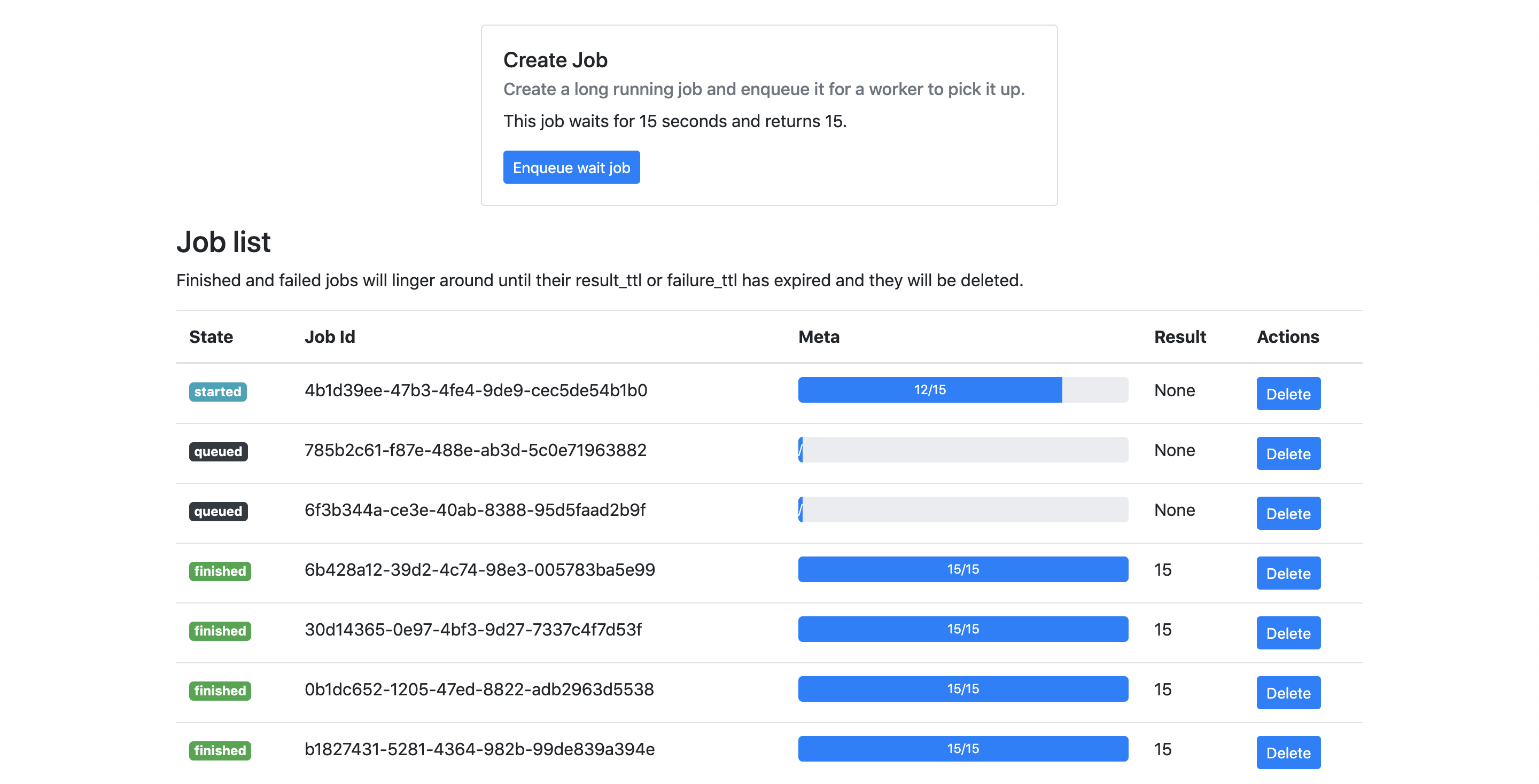 Clone the repository, cd into it and run

For each component of this project a separate docker container is afforded, controlled ("orchestrated") by docker-compose.

For the sake of simplicity, the same image is used for the separate containers. The image stems from python:3.6-stretch, which contains a debian 9 linux. Instead of debian a more lightweight image like alpine could also be used.

The are four containers in this project at work.

The image is build from project/Dockerfile. This one Dockerfile includes all the necessary python components and their dependencies from project/requirements.txt. Because we're using the same image for multiple purposes like the flask application, the rqworker and the rq-dashboard it has to contain all of these components. In an advanced use case you want to build different images which are tailored to their individual purposes.

For the redis server container the out-of-the-box redis image is used - not much use building a image for redis by ourself.

docker-compose in development and production

To run the application in a production like manner:

To start the application in a development manner:

docker-compose.yml defines a service made up of four containers. A service is a group of containers and additional settings that make up an docker-compose application.

Instead of reusing the same image we could have said build: ./project on all of the three containers and leave out the image: master-image lines. This would result in three individual but identical images being build.

However, we do specify a different command: on each container. As we set up the image in the Dockerfile to be universaly usable, no specific command is run from there. Which means that if you would run the image outside of docker-compose on its own it would do nothing and just exit.

On the web container command: gunicorn --workers 4 --bind 0.0.0.0:5000 --timeout 120 'server:create_app()' tells docker-compose to run (in the container) the gunicorn web server. -b :5000 tells gunicorn to bind to (listen to) port 5000 on whatever IPs the container has. 'server:create_app()' points gunicorn to the place where the flask app factory is. It in effect tells gunicorn to look for the python module server in its working directory (which we set to /app in the Dockerfile) and look for the app egnerating function create_app which must create a valid flask application instance. Gunicorn with its dependencies and all the files that make up our web application have been copied into the image during the Dockerfile build process.

On the worker container command: rqworker --name worker --url redis://redis:6379/0 tells docker-compose to run a rqworker process. --url redis://redis:6379/0 tells the worker where it finds the redis server from where it fetches the jobs to execute and sends back the results. As the same image is used, the working directory of the worker is also /app, which again contains a copy of the web application files placed into the image. The rqworker needs access to the jobs.py file where it find the code to excecute jobs. After all rqworker is a python program that needs to have the python modules in reach which it is supposed to execute.

For the redis container we specify that we want to use a prebuild image from Docker Hub rather than a self made one, for which a simple image: redis is sufficient. The default configuration of redis pretty much suits us, so we don't need to set any options.

docker-compose automatically sets up local network for our service where the containers can talk to each other; usually in the 172.x.x.x range. It also ensures that containers can address each other by their names. That's why we can write redis://redis:6379 without knowing the actual IP of the redis container.

docker-compose-development.yml is the overlay configuration file with works in conjunction with docker-compose.yml, so it only states the changes to it.

One thing it does is to override command: on the web container to use a different web server. Instead of gunicorn in docker-compose.yml it uses the web server bundled with flask:

For the flask web server to work we also need to set some environment variables:

This tells flask where to find the application instance and activates debug mode.

Using the bundled flask web server is not recommended for production use, but has some advantages during development. It comes with a build in debugger and it will automatically reload when you make changes to the source files – a feature we utilize in our workflow.

We also set container_name: when in development. This allows for easy reference to a container in docker commands executed from the shell. In the docker command line arguments containers can either be referenced by their container id or by their container name. Both of them have to be unique over all docker containers on a host and that's not just the ones from our project. Even though we specified web:, worker:, dashboard: and redis: in docker-compose.yml this will only be local to our service and for e.g. network name resolution, but they are not the final container names. Without the container_name: option docker-compose will auto generate a name for every container and make sure it's unique.

Explicitly naming containers however is not a good thing for production, as you might happen to have more than one called 'server' or 'redis' on the same host.

The bundled flask development web server has the ability to auto reload itself when it detects a change to a source file. This comes in handy during development because you don't have manually restart the server to see the effect of the changes you've made. But as we are running the web server inside a container changes to files on the host file system e.g. in the app/ directory must affect files in the container. This is done by mounting the the ./project directory on the host to the /app in the container.

Auto reload does not only work for the flask web server inside the web container. The rqworker will also use the latest version of a source files when it starts to execute a job. Because it will reload itself everytime it executes a job anyway (see the section about worker performance in the RQ documentation for details).

Getting a shell in a container

Stopping containers and cleaning up