pyFDA is a GUI based tool in Python / Qt for analysing and designing discrete time filters. When the migen module is installed, fixpoint implementations (for some filter types) can be simulated and exported as synthesizable Verilog netlists. 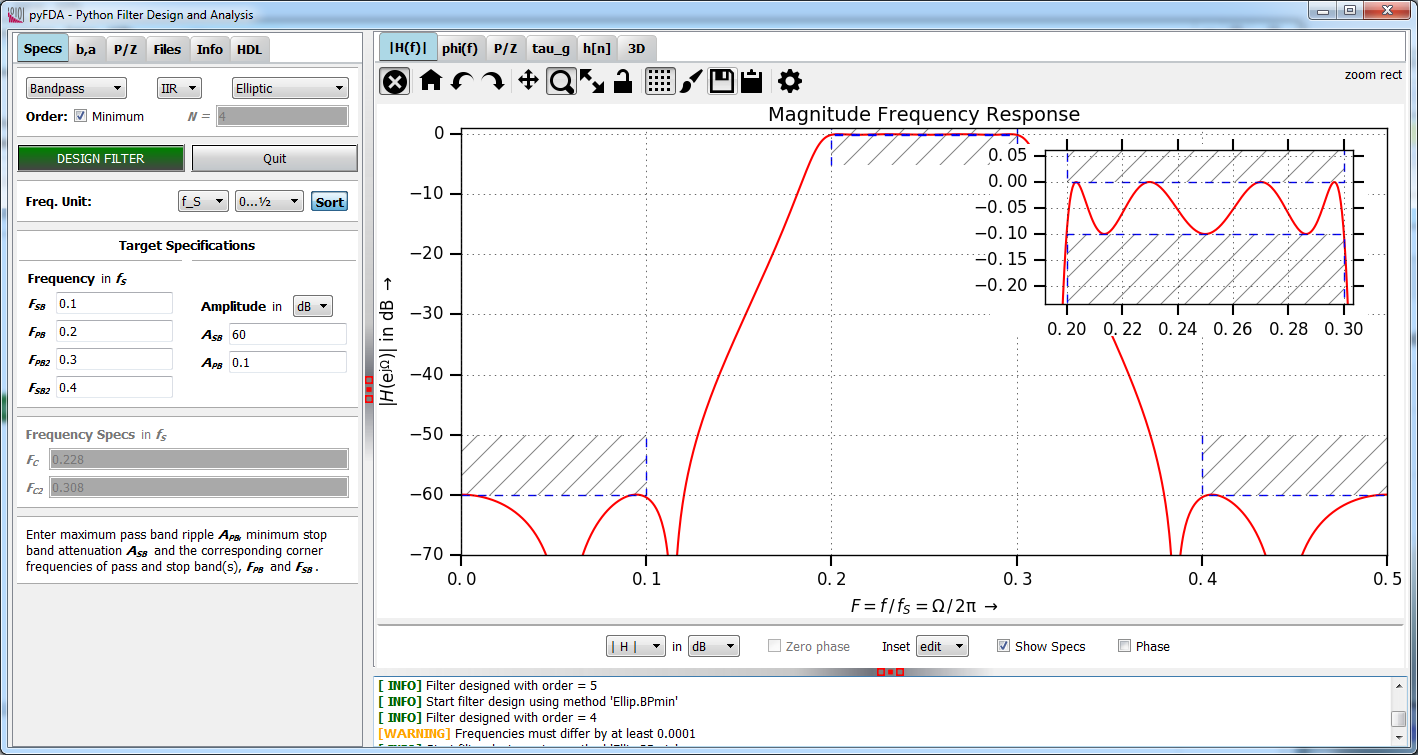 More screenshots from the current version:

All required libraries are installed automatically by conda or pip if they are missing except for PyQt5: I have not included it in the installation scripts for pyfda to prevent installing it twice accidentally. PyQt5 has to be installed manually either

If you have both installed, you're in trouble: If you do

and get a similar result as above, you probably have a corrupted system.

You need to have a working Python installation on your computer, preferrably including the libraries listed above. I plan to provide binaries / flatpacks but haven't found the time yet.

There is only one version of pyfda for all supported operating systems, Python and Qt versions. As pyfda is a pure Python project (no binaries, no compilation required), you don't need to install anything in principle: You can simply download and unpack the zip file from here and start the program from the top project directory using pyfda/pyfdax.py with

For testing purposes, most individual files from pyFDA can be run using e.g.

However, installing pyfda makes life easier by creating a run script in your path. This can be done in different ways:

If you use the Anaconda distribution, you can install / update pyfda from my Anaconda channel Chipmuenk. Don't use the base environment for installing pyfda (you shouldn't do this for any software) but rather switch to another environment (conda activate my_fancy_environment) or create a new one (conda create --name my_new_environment).

When you have one of the two installed, you can proceed with

Otherwise, you can install from PyPI (attention: pip does install PyQt5 when it is not present) using

where the specified path points to pyfda/setup.py but without including setup.py. In this case, you need to have a local copy of the pyfda project, preferrably obtained using git (see below).

To select a specific version (by default, pip selects the latest stable version) use e.g.

You can also download the zip file and extract it to a temp directory of your choice. Install it either to your <python>/Lib/site-packages subdirectory (this creates a copy) using

For development purposes, you should fork the latest version of pyfda from https://github.com/chipmuenk/pyfda.git and create a local copy using

This command creates a new folder "pyfda" at your current directory level and copies the complete pyfda project into it.

The tutorial at https://help.github.com/en/articles/fork-a-repo provides a good starting point. As described above, pyfda can be installed locally using either

Now you can edit the code and test it. If you're happy with it, push it to your repo and create a Pull Request so that the code can be reviewed and merged into the chipmuenk/pyfda repo.

In any case, a start script pyfdax has been created in <python>/Scripts which should be in your path. So, simply start pyfda using

The location of the following two configuration files (copied to user space) can be checked via the tab Files -> About:

Layout and some default paths can be customized using the file pyfda/pyfda_rc.py, at the moment you have to edit that file at its original location.

The following features are currently implemented:

Why yet another filter design tool?

Release 1.0 (planned for some time in the not so near future)