Wayfinding indoors still has not been studied to the same extent as wayfind-ing outdoors. Though some approaches have been explored in recent studies forindoor navigation, no standard methods exist. Motivated recently-emersed Augmented Reality and Mixed Reality technologies, this research demonstrates a feasible workflow of developing a Mixed Reality indoor navigation system, HoloNav,on Microsoft HoloLens 2. The system utilized Azure Spatial Anchors as virtualmarkers for labeling landmarks. A user study was conducted on the two variantsof HoloNav designed with two different navigation visualizations to help gaininformation about the kind of visualizations preferred in a Mixed Reality navigation system. Furthermore, the benefits of Mixed Reality navigation systemscompared to traditional systems are also highlighted and discussed via a user study with more than twenty users. 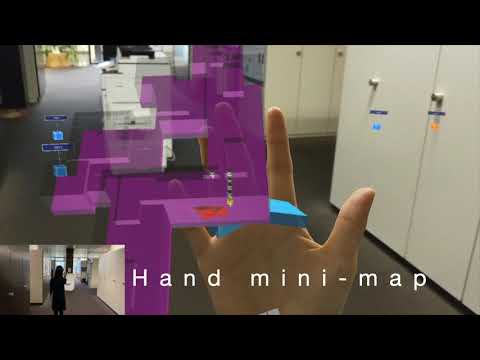 For more details about the project, checkout our report

HoloNav leverages ESRI CityEngine and Azure Spatial Anchor to provide future solution for indoor navigation. Powered by Microsoft HoloLens 2 and its advanced Mixed Reality (MR) features, HoloNav enables eﬃcient and eﬀective indoor localization and navigation as well as direct manipulation with the hand-invoked mini-map, contributing to interactive and immersive user experiences. The application explores possible interaction concepts and visualizations of MR-based indoor navigation systems on mobile devices and demonstrates a working prototypes that can be extended to further applications.

There is a known issue with the FollowMe/Solver Handler function of MRTK on HoloLens 2 with Visual Studio 2019 of version 16.5.0. This issue is claimed to be fixed with the next Visual Studio release, while prior this release, a walkaround would be using MRTK v2.5.0/v2.5.1 (or higher) Foundation together with Tools packages. For previous version of Azure Spatial Anchor SDK, where the account domain is not required, there might be problems. Please use the latest version of SDK for better consistency.

Setup the app with API Keys

Note: Azure Table Storage is a free service offer by Azure, which is sufficient for this project, yet Azure does also offer more advanced storage service Azure Cosmos DB. In addition, according to the official documentation, the Table API is integrated to Cosmos DB SDK in the newer version.

Our application is partially adapted based on the following official tutorials.