This project is the source code for a Spot Micro quadruped, a 4 legged open source robot. This code is capable of keyboard control of a spot micro robot with sit, stand, angle command, and walk capability. The software is implemented on a Raspberry Pi 3B computer running Ubuntu 16.04.

The software is composed ot C++ and python nodes in a ROS framework.

The frame utilized is the ThingVerse Spot Micro frame developed by KDY0523. See the thingverse page below for additional details for assembly hardware. The files for cls6336hv were printed which also fit the hv5523mg I used. https://www.thingiverse.com/thing:3445283

Servos should be connected in the following order to the PCA 9685 control board:

This repo is structured as a catkin workspace in a ROS Kinetic envivornment on linux. Raspberry pi images preloaded with a ROS Kinetic installation can be found via ubiquity robotics. See webpage for download, setup, and wifi setup instructions: https://downloads.ubiquityrobotics.com/. It is suggested to also install ROS Kinetic on a Ubuntu 16.04 linux installation/dual boot/virtual machine on a PC for development and for running control nodes.

NOTE It is likely required to add a SWAP partition of about 1 GB on the RPI's sd card to increase the virtual memory available beyond the hardware RAM on a RPI. In my experience the catkin compilation process would use all the onboard RAM and would not complete without adding a SWAP partition. Example instructions for how to do this can be found here: https://nebl.io/neblio-university/enabling-increasing-raspberry-pi-swap/

The provided ROS Catkin make build system can be utilized, but I used catkin tools instead (https://catkin-tools.readthedocs.io/en/latest/). Compilation commands below will be given assuming catkin tools.

This repo should be checked out to a catkin workspace on the raspberry pi so the directory structure appears as follows. If not already available, a catkin workspace can be created or transitioned from a catkin make workspace using catkin tools. Make sure to also checkout git submodules.

Configure catkin tools so cmake Release flag is added. This speeds up code execution. Alternatively, use build type Debug so debug symbols are generated so debugging can be done through a IDE such as VSCode: catkin config --cmake-args -DCMAKE_BUILD_TYPE=Release

The gait implemented on master is a 8 phase gait that incorporates body movement which helps maintain balance and stability. An alternate trot gait, where the diagonal legs move simultaneously, can achieve faster walking speeds, but is less stable and requires careful positioning of the robot's center of mass. The trot gait is the one depicted in the animation at the top of this document, and can be found on the branch to this project titled alternate_gait. The 8 phase gait can be observed in the linked Youtube video.

This section attemps to be a full set of instructions to get a spot micro robot calibrated and running with this code.

Comprehensive instructions for servo installation, calibration, and configuration can be found in servo_calibration markdown document.

Open at least 3 ssh sessions to the raspberry pi (e.g. via tmux for convenience). Start at least the the following 3 nodes, some are optional as noted:

The robot software is driven by a finite state machine of discreet control modes. On the terminal running the spot_micro_keyboard_command node, keyboard commands are issued to move through the state machine and also to command body rates and angle commands.

In angle_cmd mode, the keys w and s are used to control pitch, a and d to control roll, and q and e to control yaw. u is used to exit back to control mode input.

In walk command mode, the keys w and s are used to control forward speed, a and d to control side speed, and q and e to control yaw rate. u is used to exit back to stand mode.

Note that the software does not currently support any command limits so deleterious or even hardware damaging behavior may be experienced if commanding orienetations or body rates beyond the capability of the robot.

Typing quit at the command input will quit the program with the servos fixed at their previous commanded value. Thus is it reccomended to put the robot in idle before quitting. In idle mode servos are commanded such that they hold no fixed position and can "free wheel". 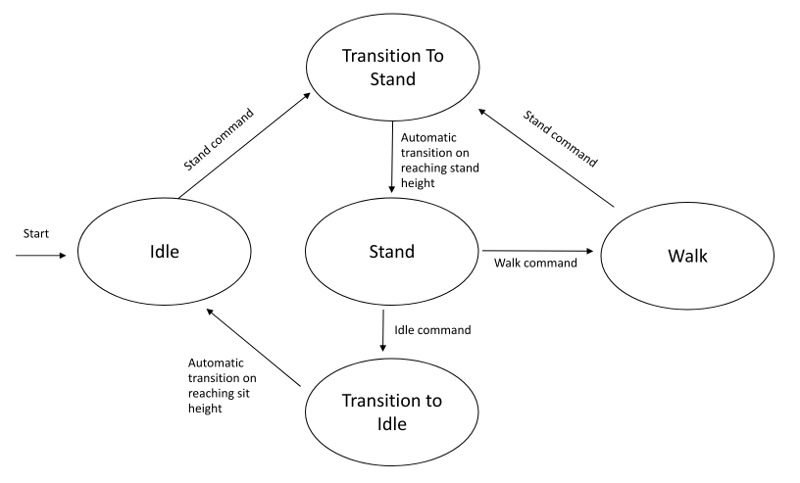 The default gait is a walk style gait that consists of 8 phases, swings only one leg at a time, and shifts the body in between leg swings to balance the body over the 3 legs that remain on the ground. No speed or angle command limits are implemented in the software, but the inverse kinematics model does cruide trigonometric domain function limiting to avoid math errors.

A yaml confguration file is used for holding various software configuration settings, including servo configuration dictionaries. Servo's can be calibrated using the servo_move_keyboard node, a calibration of angles via eye is sufficient for the reasonable performance.

My desired future goals for this project, in order of preference, are to: