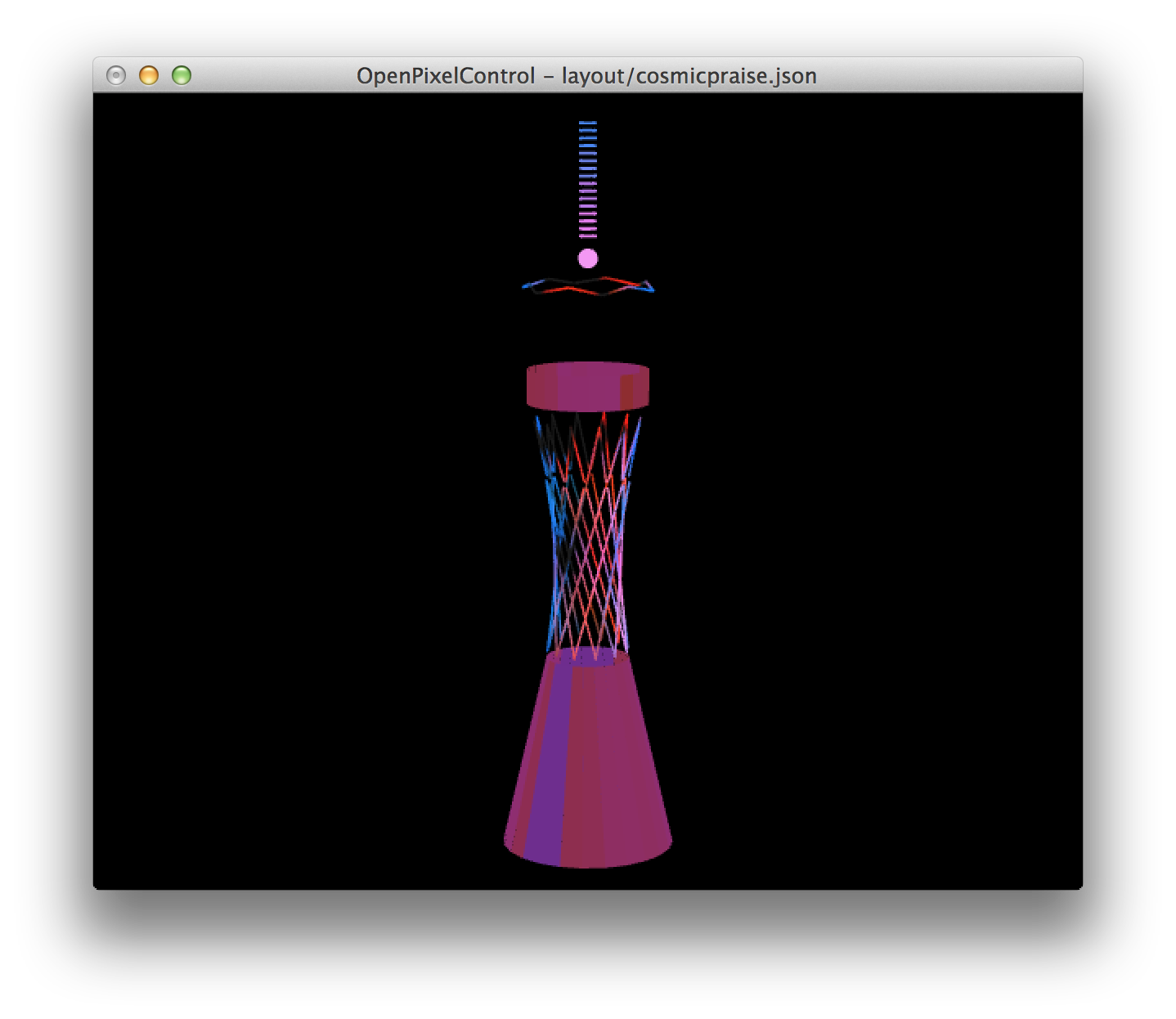 The tower structure is covered with 150 meters of WS2812 LED strip and 49 Philips Color Kinetics RGB fixtures; over 4600 individual pixels. The strips are run by LEDscape running on Beaglebone Blacks receiving OpenPixelControl (TCP), and the CK fixtures are powered by Ethernet-enabled CK power suppies communicating over Kinet (UDP).

How to contribute to Cosmic Praise

How to write LED effects

You can see the existing effect library here: https://github.com/Dewb/CosmicPraise/tree/master/client/python/effects

The simplest possible effect would be to just color every pixel in the tower the same color (in this case, hue 0 in the default palette, or red.)

Slightly more complicated is to color each pixel differently with some math based on its cylindrical coordinates, and the animation time:

An effect is just a function that takes two arguments, tower and state, and calls tower.set_pixel(pixel, chroma, luma) on whatever parts of the structure it wants to light up. tower.set_pixel expects a pixel item from an iterator, plus two values: a "chroma" and a "luma" value. These will be mapped to the current palette of the sculpture, so we can overlap or sequence multiple effects and still achieve the effect of a unified aesthetic object.

chroma and luma should both range from 0.0 to 1.0. You can think of chroma as indexing through an imaginary watercolor paintbox of unknown size, with 0.0 the left side of the box and 1.0 the right side, and luma as making it full strength at 1.0, or watering it down to transparent at 0.0.

There is also a tower.set_pixel_rgb(pixel, rgb), which expects a RGB tuple of values 0.0-1.0, for effects that must be a specific color, whether for debugging or for a specific aesthetic need. But we encourage you to use tower.set_pixel unless absolutely necessary.

The tower object also provides iterators over the entire structure, or a certain part, like tower.railing or tower.spire. Iterating over these generators gives you pixel items, each of which is a dictionary with information about the pixel including its (x,y,z) coordinates in 3D space, its (theta, r, z) coordinates in cylindrical 3D space, its strip index and address, etc. So you can color different parts of the structure with different techniques:

The tower object provides the following methods and generators at the moment:

The above generators cover the basic parts of the structure, but we have additional fancier generators just for the diagonal grid on the middle of the tower, which is sort of our main play surface. See addressOrderTest, diamondTest, and lightningTest for a demonstration of the fancier generators.

Effects can define additional named arguments after the (tower, state) arguments. Any named arguments will be slurped up into the OSC server and exposed as endpoints for timeline or interactive control. This will allow us to get a lot more variation and interest out of simple effects.

In order to use the OSC features, you'll need to install the pyOSC module.

Pypy is a new version of the Python language tools that is substantially faster that the default implementation. Virtual environments provide a nice method for keeping python projects and their dependencies locally managed and seperate from the system. Running pypy inside a virtual environment is the recommended method of running the Cosmic Praise python client.

To receive MIDI events from the spark chamber, the python-rtmidi module is required. If you don't need to use or test this feature, you can ignore this section.

Ubuntu users may need to build python-rtmidi from the source distro, see the troubleshooting section below.

Make sure you have typed the path to the layout .json file correctly. If all else fails, try building your own copy of the simulator from https://github.com/Dewb/openpixelcontrol.

Pypy client fails with an "ImportError: unable to load _rtmidi.pypy.so"

You need to reinstall python-rtmidi linked with libc++.