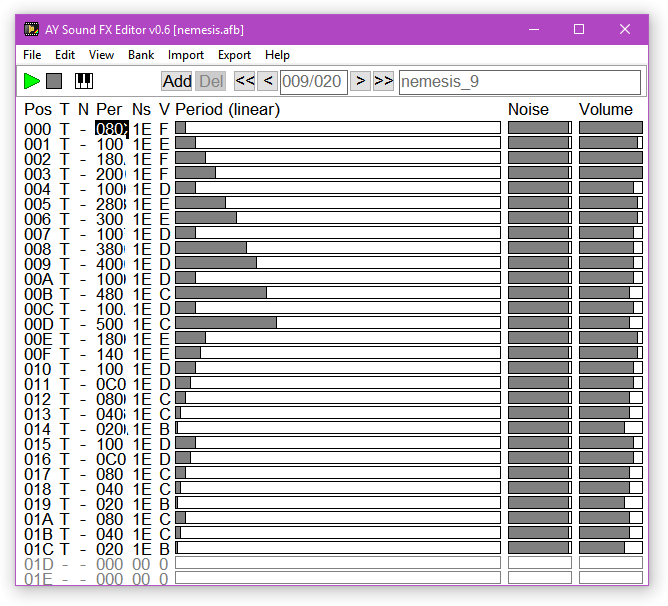 AY Sound FX Editor is a complete solution to create sound effects for the AY-3-8910 sound chip. The effects can be used in games or other software for ZX Spectrum. It is also possible to use them with other micro computers that use the AY-3-8910. The package includes a Windows cross editor, an example sound effects player with Z80 assembly source code, a compiled example, and a sound effects library.

The editor allows to create single channel sound effects with duration up to 4096 TV frames. Frame duration is 1/50s, so maximum effect duration is about 80 seconds. Volume, noise and mixer settings can be changed every frame. Data is stored in a compact format that omits repeating values. Effects are combined into banks, up to 256 effects. The effects player works with a bank, and an effect is played using its order number in the bank.

It should be noted that the editor can't create effects on its own, it only allows to edit AY registers data in easy way. It is quite similar to the sample editors in AY music trackers. You have to know how the AY sound chip works in order to get your desired results. However, the editor allows you to import data from various formats, which can make things easier.

This "improved" version is a fork of Shiru's superb ayfxedit tool and player, available here. It's not really improved in any meaningful way; the name was a good-natured nod to the Vortex II AY tracker mod made by siril/4d, called Vortex Tracker II Improved :)

I got frustrated trying to build Shiru's C++ Builder source in any of the publicly available C++ Builder versions, so I converted the project to unicode and built this fork in the free C++ Builder 10.2 Tokyo Starter Edition.

The main reason I forked ayfxedit was because I wanted to add looped sustain effects to the editor and player - my use case was a thrust sound for Jet Power Jack that ramps up when you thrust, sustains as long as you hold '''SPACE''' down, then fades away when you release SPACE. I eventually realised I could do this in the player without needing to modifiy the editor, but by then I had made some other small UI enhancements like aligning the column headers, and being able to double-click on .afx and .afb files if the file extensions are registed.

I would also like to make an enhanced player that locks certain sounds to certain channels, so thrust is panned center, and other sounds like pick up and die are panned left/right. ANn maybe even a pseudo-surround-sound mode that bounces a monophonic fx around all three channels...

I added an alternate set of z80 player and test files optimised for the Zeus Windows cross-assembler, and translated Shiru's Russian comments into English.

Basically, treat anything in this fork as experimental and possibly buggy, and go to the original source for the definitive version of ayfxedit.

Program interface is all-english. There is main menu at the top of the window. The items:

Exit - Exit from the editor.

Add new effect - Append a new effect to the end of the bank and make it current;
Delete effect - Delete current effect from the bank;
Insert new effect - Insert a new effect in place of current, the current and all subsequent will be shifted.

Below the main menu there is a bar with a number of controls. When you hover the mouse above them, a hint is displayed.

At the left of the bar there are three buttons. Play and Stop perform corresponding actions with the current effect. The button with the piano keys shows or hides the virtual piano window (see below).

At the right of the bar there are bank controls. [Add] appends an effect to the end of the bank. [Del] deletes current effect. Next four buttons with two numbers (current effect and total number of effects in bank) in between are to navigate between effects. Double arrows are to go to the first and the last effect in the bank. Last in the bar there is effect name. You can edit it by clicking it with left mouse button, entering a new name, and pressing Enter to confirm changes. Some hotkeys won't work while the name editor is active.

All remaining space of the program window is the effect editor. You can use either mouse or keyboard to edit values. There are few columns. Pos is frame number. You can select frames with LMB on the frame number or deselect them with RMB. T, N are the AY mixer bits, edited similar to the selection. Per is the tone period. Ns is the noise period. V is the volume. When you click on any of Per, NS or V value, cursor moves to the frame. In the right part of the window the same values are represented in graphic form, they can also be edited using mouse buttons. When the Ctrl button is held down, mouse won't move horizontally, allowing easier drawing a sequence of the same values.

The editor window can be resized vertically with one frame step, but can not be resized horizontally.

There is a special window to simplify creation of sound effects based on musical notes. It can be brought with the button with piano keys or through View->Piano Input item of the main menu. At the left part of the window there is a hint which keyboard buttons correspond to notes. At the right there are controls that affect to the input. The Octave field sets up the current octave (1...8). The Step field sets up the number of frames that the cursor will advance after entering a note. The Fill field sets up how many subsequent frames will be set to the same value with a single note input. The Link button links Step and Fill fields, matching up the fill value to the step. When the Set T button is down, T flag is set for frame at note input, when it is up, existing T value of a frame won't be changed. Set Volume does the same for volume column, entering value that can be changed at the right of the button.

AY registers dump. Files with complete 16-byte header are supported. These files could be created with AY Emulator or Z80Stealth. You can select channel that will be source of data before import. Auto option will select the channel where the volume changes first, with automatic skip of the pause before. Tone, noise, volume, and mixer settings of selected channel will be imported. To simplify things, it is better to use source files with single channel effects.

AY registers dump. These files could be created with AY Emulator and UnrealSpeccy. Import options are the same as for PSG.

Registers dump for SN76489 or compatibles, the sound chip that has been used in Master System, Game Gear, Sega Genesis, ColecoVision, and some other computers or game consoles. The imported data is adapted to get similar sound, but as the chip capabilities are quite different, there will be difference.

Only standard, unpacked PCM files supported, of any sample rate, bits depth, mono or stereo. Volume envelope gets imported, tone pitch gets analyzed. If it is possible to detect pitch for a frame, T flag sets along with the pitch value, otherwise N flag sets.

Vortex Tracker II instrument, which is a plain text file. Export dialogs allows to set a base note that should be used to get original pitch in the tracker.

Comma separated values in a text file. Can be handy for further parsing and processing with external tools.

When this item is checked, export functions will export current effect only, under specified filename.

When this item is checked, export functions will export all effects from the bank. The filename can have an optional prefix with effect number and name, this can be selected as the file type in the export dialog.

Every frame encoded with a flag byte and a number of bytes, which is vary depending from value change flags.

End of the effect is marked with byte sequence #D0, #20. Player should detect it before outputting it to the AY registers, by checking noise period value to be equal #20. The editor considers last non-zero volume value as the last frame of an effect, other parameters aren't matter.

The package includes a simple sound effects player. It is located at /z80player/ayfxplay.a80. This file is a text file with Z80 source code for asm80 cross assembler. There are comments on use and internals as well.

The player can play effects using all three AY channels. When there is an empty (not playing) channel, it will be used, otherwise the one that was active for longest time will be used. AY music can't play while this version of the player is active.

Besides the player, there is an example program, available as compiled SCL disk image and source code. All keys has sound effects assigned to them. Space key turns on/off music that is played on the second sound chip of TurboSound device (NedoPC version), if it is available. If the TurboSound is absent, music will play on the same chip, producing various sound artefacts. You can send bug reports, suggestions, or sound effects to include into the bundled library, at shiru@mail.ru.