A simple, configurable aerodynamic wing that applies lift and drag forces based on pre-defined curves. Includes a flyable example airplane, along with a bomb and rocket.

You can either clone the repository or download the asset package located in the root.

If you'd like to try the standalone demo, it can be downloaded from the releases page.

Note: When importing the demo content from the package, a "Yaw" axis will need to be set up in the Input Manager in order to get the rudder to work on the sample plane. This is because asset packages cannot modify the Input Manager, and the plane requires a third axis not available on the default setup.

The demo plane is best flown with an Xbox One controller. Keyboard controls will work, but because of the on/off input that comes from keys, it's not the best experience.

These wings are driven through a very abstract approximation of aerodynamics. Lift and drag coefficients are simulated through pre-defined curves created on a WingCurve ScriptableObject. As the angle of attack changes, so does the lift and drag forces incurred. Lift is always perpendicular to the air flow, while drag is always in the opposite direction of the velocity.

By putting together wings onto an object in a reasonable way, it's easy to create a physics based flyable airplane. To turn the plane (without cheating with Rigidbody.AddTorque), you will need to deflect wings to create a torque on the plane. Included is a very basic control surface component to facilitate this. See the example Airplane prefab for how to set this up.

Both a WingCurve and Rigidbody are requred. The Rigidbody preferably should be on a parent gameobject that represents the object using the wings. The Rigidbody can be assigned manually through script, but it also automatically uses "GetComponentInParent" during its Awake to try and find one.

Wing Curves can be created by right clicking in the Project window and selecting Create -> Wing Curve. They are required for wing operation, and represent the "flight model." These can be arbitrarily tweaked, but two example curves have been given that should be useful for most cases.

The Standard Wing is based on experimental data on the NACA 0015 airfoil. It's a symmetrical wing, so it doesn't generate lift at zero angle of attack. However, because it's still a wing, it is very responsive to angle of attack and creates lift easily with minimal angles of attack. It will however stall at around 16 degrees and lift will drop dramatically. This wing is designed to be used by the main wing(s) on a plane. 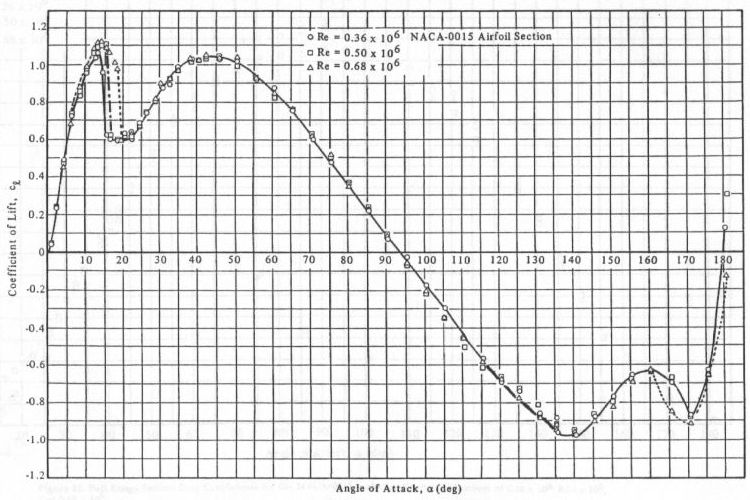 The flat plate wing is what it sounds like and is a good approximation for control surfaces or fins on a missile. They produce lift, but that's only because they have an angle of attack and the wind beneath it is pushing it upwards. These don't really stall, but they don't really produce much lift unless they're deflecting pretty hard.

The Lifting wing is a high lift wing that generates lift even at 0 degrees angle of attack, but stalls easily. It's based loosely on the NACA 2408 wing. 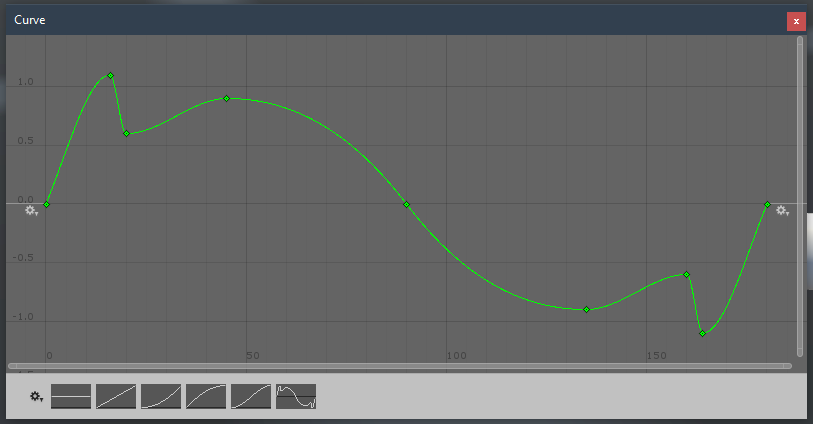 When creating wings, the most important points are the first and last three. These are the ones that most often are directly available in any kind of lift coefficient vs alpha graph, and the ones that you will most often be adjusting. Most CL graphs will stop a little after the stalling point, at which point air flow becomes unpredictable. Eventually, most wings start to follow the lift curves of a generic flat plate. This is represented by the middle three points in the default graph and does not usually need to be adjusted.

To aid in creating wings, a lift curve generator is available. With it, you can specify the basic parameters of the curve such as where the critical angle of attack is, and how much lift the wing generates at this point. Tooltips are available on each option.

To actually fly the plane, you'll need to deflect your wings. The ControlSurface class is included as a simple example, but really shouldn't be taken as gospel. It's a bit hacky.

It's very simple to operate. All you need to do is set a normalized deflection (-1 to 1) through script by setting the targetDeflection variable. From there, the control surface will move to the specified deflection at their given speed. Control surfaces only deflect in the "pitch" axis, so make sure you orient these as needed.

For certain control surfaces you can put the wings on the same game object, but often times you want the axis of rotation to be different from where the wing is physically located. In those cases, the wing is best on a child game object. See the Airplane prefab for examples on how to set these up with wings.

Control surfaces can optionally have their deflection limited based on the force required to deflect the wing. Put another way, the faster the plane is flying, the less it will be able to deflect the wing. This makes for much more stable and controllable aircraft at high speed, and has a basis in reality.