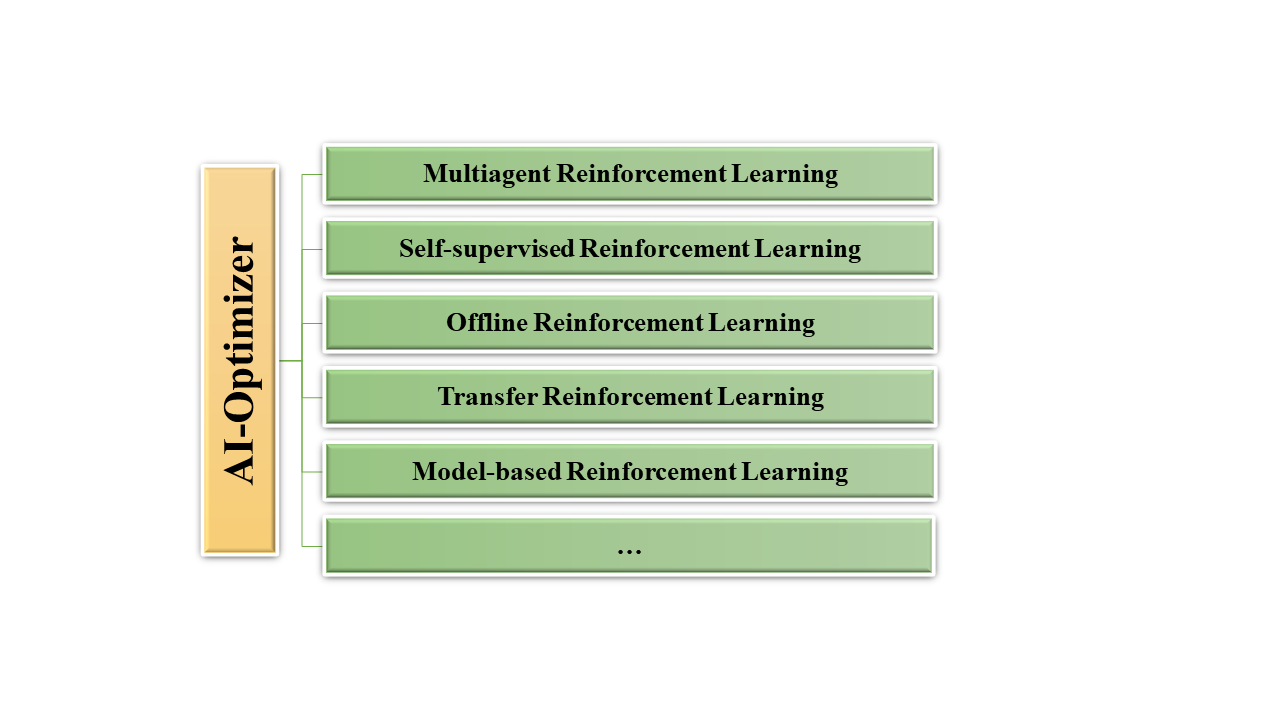 Multi-agent reinforcement learning (MARL) has successfully addressed many complex real-world problems, such as playing the game of Go (AlphaGo, AlphaGo Zero), playing real-time multi-player strategy games (StarCraft II, Dota 2, Honor of Kings)，playing card games (Poker, no-limit Poker), robotic control and autonomous driving (Smarts). However, MARL suffers from several challenges in theoretical analysis, in addition to those that arise in single-agent RL. We summarize below the challenges that we regard as fundamental in developing theories for MARL.

Our target is to design more efficient, more scalable  and much easier to use MARL algorithms which could solve or alleviate the problems mentioned above and promote the deployment and landing of MARL in more real-world applications.

We carry out our studies according to the challenges mentioned above. To solve the the curse of dimensionality issue, we design a series of scalable multiagent neural networks which could efficiently reduce the size of the search space by leveraging the permutation invariance and permutation equivariance properties, explicitly taking the action semantics into consideration, etc. To better make a balance of the exploration–exploitation tradeoff, we propose Progressive Mutual Information Collaboration to achieve more efficient cooperative exploration... An overall picture of the proposed methods is shown below. 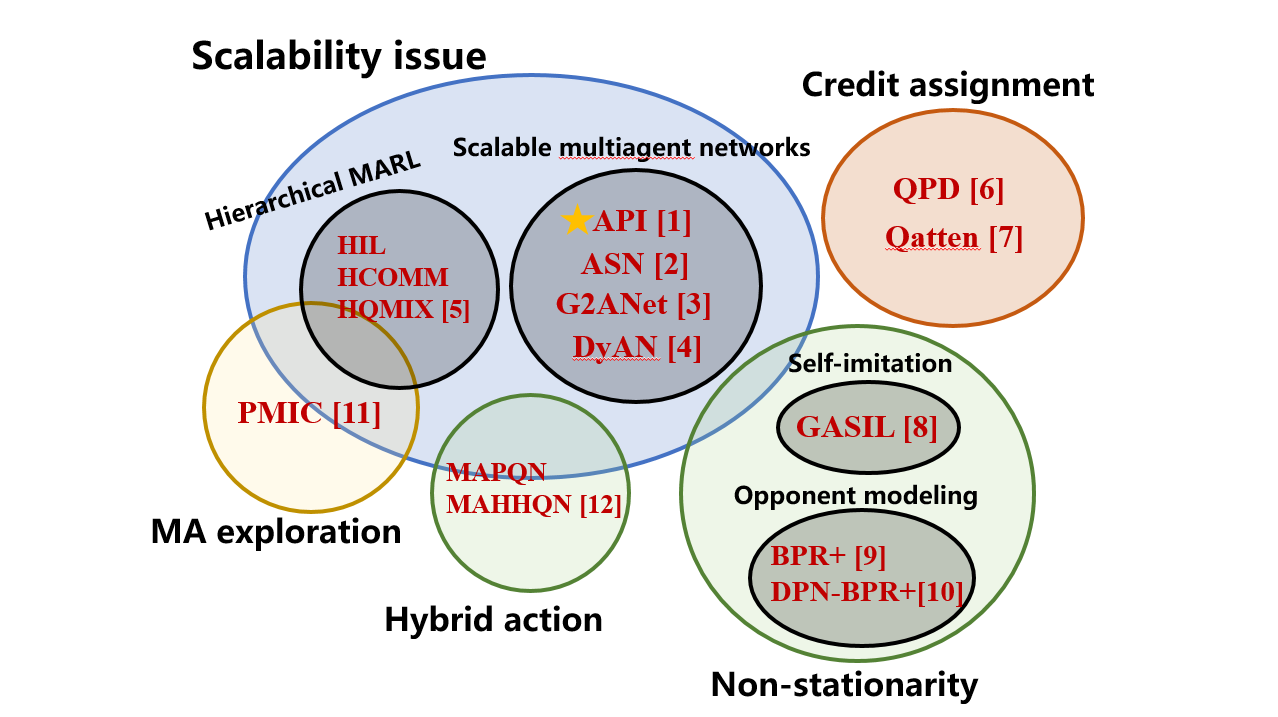 The main contribution of this repository is that we release a serials of efficient, scalable and easy to use MARL algorithms which achieve superior performance in the typical benchmarks of the MARL research community. Besides, we prove a systematic overview of challenges in MARL. With this repo and our research works, we want to draw the attention of MARL community to design more efficient, more scalable and much easier to use MARL algorithms and promote the deployment and landing of MARL in more real-world applications.

Current deep RL methods still typically rely on active data collection to succeed, hindering their application in the real world especially when the data collection is dangerous or expensive. Offline RL (also known as batch RL) is a data-driven RL paradigm concerned with learning exclusively from static datasets of previously-collected experiences. In this setting, a behavior policy interacts with the environment to collect a set of experiences, which can later be used to learn a policy without further interaction. This paradigm can be extremely valuable in settings where online interaction is impractical. However, current offline rl methods are restricted to three challenges:

This repository contains the codes of representative benchmarks and algorithms on the topic of Offline Reinforcement Learning. The repository is developed based on d3rlpy(https://github.com/takuseno/d3rlpy) following MIT license to shed lights on the research on the above three challenges. While inheriting its advantages, the additional features include (or will be included):

Since the RL agent always receives, processes, and delivers all kinds of data in the learning process (i.e., the typical Agent-Environment Interface), how to properly represent such "data" is naturally the key point to the effectiveness and efficiency of RL.

In this branch, we focus on three key questions as follows:

These four pespectives are major elements involved in general Agent-Environment Interface of RL. They play the roles of input, optimization target and etc. in the process of RL. The representation of these elements make a great impact on the sample efficiency, convergence optimality and cross-enviornment generalization.

The central contribution of this repo is A Unified Algorithmic Framework (Implementation Design) of SSRL Algorithm. The framework provides a unified interpretation for almost all currently existing SSRL algorithms. Moreover, the framework can also serve as a paradigm when we are going to devise new methods.

Our ultimate goal is to promote the establishment of the ecology of SSRL, which is illustrated below.

Towards addressing the key problems of RL, we study SSRL with four types of representations. For researches from all four pespectives, a unified framework of algorithm and imeplementation serves as the underpinnings. The representations studied from different pespectives further boost various downstream RL tasks. Finally, this promotes the deployment and landing of RL in real-world applications. 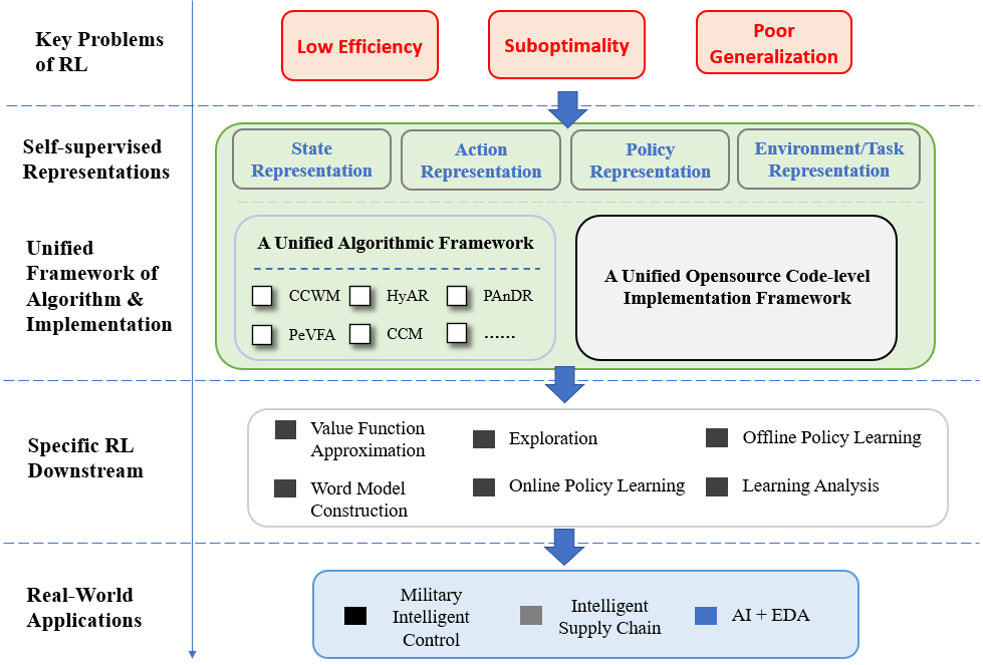 With this repo and our research works, we want to draw the attention of RL community to studies on Self-supervised Representation Learning for RL.

For people who are insterested in RL, our introduction in this repo and our blogs can be a preliminary tutorial. For cutting-edge RL researchers, we expect that our research thoughts and proposed SSRL framework can open up some new angles for future works on more advanced RL. For RL participators (especially who work on related fields), we hope that our opensource works and codes may be helpful and inspiring.

We are also looking forward to feedback in any form to promote more in-depth researches.

Recently, Deep Reinforcement Learning (DRL) has achieved a lot of success in human-level control problems, such as video games, robot control, autonomous vehicles, smart grids and so on. However, DRL is still faced with the sample-inefficiency problem especially when the state-action space becomes large, which makes it difficult to learn from scratch. This means the agent has to use a large number of samples to learn a good policy. Furthermore, the sample-inefficiency problem is much more severe in Multiagent Reinforcement Learning (MARL) due to the exponential increase of the state-action space.

Sample-inefficiency problem: The main challenge that transfer and multi-task RL aims to solve is the sample-inefficiency problem. This problem forces the agent to collect a huge amount of training data to learn the optimal policy. For example, the Rainbow DQN requires around 18 million frames of training data to exceed the average level of human players, which is equivalent to 60 hours of games played by human players. However, human players can usually learn an Atari game within a few minutes and can reach the average level of the same player after one hour of training.

This repository contains the released codes of representative benchmarks and algorithms of TJU-RL-Lab on the topic of Transfer and Multi-task Reinforcement Learning, including the single-agent domain and multi-agent domain, addressing the sample-inefficiency problem in different ways.

In this repo, we provide specific solutions of our lab including:

The current classifications of the mainstream algorithms in the modern Model-Based RL area are orthogonal, which means some algorithms can be grouped into different categories according to different perspectives. In this branch, we focus on two key questions :How to Learn a Model and How to Utilize a Model.

Research in model-based RL has not been very standardized. It is fairly common for authors to experiment with self-designed environments, and there are several separate lines of research, which are sometimes closed-sourced or not reproducible. And for this, we have collected some of the mainstream MBRL algorithms and made some code-level optimizations. Bringing these algorithms together in a unified framework can save the researchers time in finding comparative baselines without the need to search around for implementations. Currently, we have implemented Dreamer, MBPO,BMPO, MuZero, PlaNet, SampledMuZero, CaDM and we plan to keep increasing this list in the future. We will constantly update this repo to include new research made by TJU-DRL-Lab to ensure sufficient coverage and reliability. What' more, We want to cover as many interesting new directions as possible, and then divide it into the topic we listed above, to give you some inspiration and ideas for your RESEARCH. See more here.

AI-Optimizer is still under development. More algorithms and features are going to be added and we always welcome contributions to help make AI-Optimizer better. Feel free to contribute.